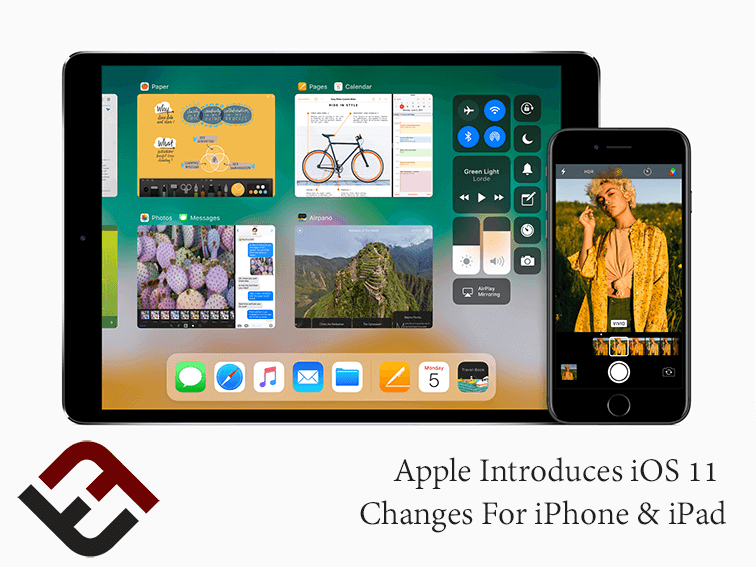 Apple’s mobile operating iOS, used on the iPhone and iPad, is constantly being updated to marry hardware and user interfacing.

Augmented reality is also coming to hundreds of millions with a new platform for developers to build apps that let users place virtual content on top of real-world scenes. Additional features include the ability to pay friends using Apple Pay, Do Not Disturb while driving to help users stay more focused on the road, and a smarter (and hopefully more usable) Siri.

Below we’ll take a look at some of the more notable iOS 11 changes, which will be available in the fall of 2017.

Files App: The new Files app brings all your files together. You can easily browse, search, and organize all your files in one place. And there’s a dedicated place for your recent files–not just the ones on your iPad, but also those in apps, on your other iOS devices, in iCloud Drive, and across other services like Box and Dropbox.

One-handed Typing: Looking for a way (other than swype) to type one-handed? Touch and hold the emoji key, select one-handed typing, and the keys will instantly move closer to your thumb.

Imaging: With iOS 11, Portrait Mode images can be taken with optical image stabilization, True Tone flash and HDR. Live Photos have been improved with new Loop and Bounce effects that create continuous video loops, while Long Exposure can capture time and movement. In Photos, Memory movies are optimized to play in both portrait and landscape orientation, and more memories, such as photos of pets or birthdays, are automatically created.

With iOS 11, Apple has also introduced a new file format for images called High-Efficiency Image File Format (HEIF) that reduces the file size of images taken with the iOS camera.

Do Not Disturb Mode: iOS 11 introduces a new way to help drivers stay more focused on the road with Do Not Disturb while driving. iPhone can detect when you may be driving and automatically silence notifications to keep the screen dark. Users have the option of sending an auto reply to contacts listed in Favorites to let them know they are driving and cannot respond until they arrive at their destination.

Improved Lock Screen: The Lock screen is even more powerful. To get to all your notifications, just pull it down like a cover sheet from the top of the screen. At a glance, you can see both your recent and missed notifications in one place.

Customizable Control Center: iOS 11 lets you customize the redesigned Control Center so you can change the settings for the things you do most. Add a Voice Memos control. Want to dim the lights in the dining room with a tap? Add Home controls. Or use 3D Touch in Control Center to unlock even more commands.

Redesigned iOS App Store: The iOS App Store will be updated for iOS 11, with lists, content by app experts, and a tab for iOS games.

Developer Support for Augmented Reality: Apple is introducing a new platform for developers to help them bring high-quality AR experiences to iPhone and iPad using the built-in camera, processors, and motion sensors in iOS devices. ARKit allows developers to tap into the latest computer vision technologies to build detailed and compelling virtual content on top of real-world scenes for education, interactive gaming, industrial design, and more.

Multitasking: iOS 11 makes multitasking on iPad even more powerful with a new customizable Dock that provides quick access to frequently used apps and documents from any screen, and a redesigned app switcher makes it easier to move between pairs of active apps, used in Split View and now Slide Over.

Improved Dock: The new Dock is a foundational change for iPad. It’s now available from any screen; with just a swipe, you can open and switch apps instantly. And you can customize it with more of your favorite apps. The Dock also changes as you work. Intelligently suggested apps (like ones you opened recently and the last one you were using on your iPhone or Mac) will appear in the right side of the Dock.

Files App: The new Files app brings all your files together. You can browse, search, and organize all your files in one place. And there’s a dedicated place for your recent files. Not just the ones on your iPad, but also those in apps, on your other iOS devices, in iCloud Drive, and across other services like Box and Dropbox.

Apple Pencil: The Apple Pencil is more deeply integrated into iPad with support for inline drawing and a new Instant Notes feature opens Notes from the Lock Screen by simply tapping Apple Pencil on the display.

The developer preview of iOS 11 is available to iOS Developer Program members at developer.apple.com, and a public beta is now available at beta.apple.com.