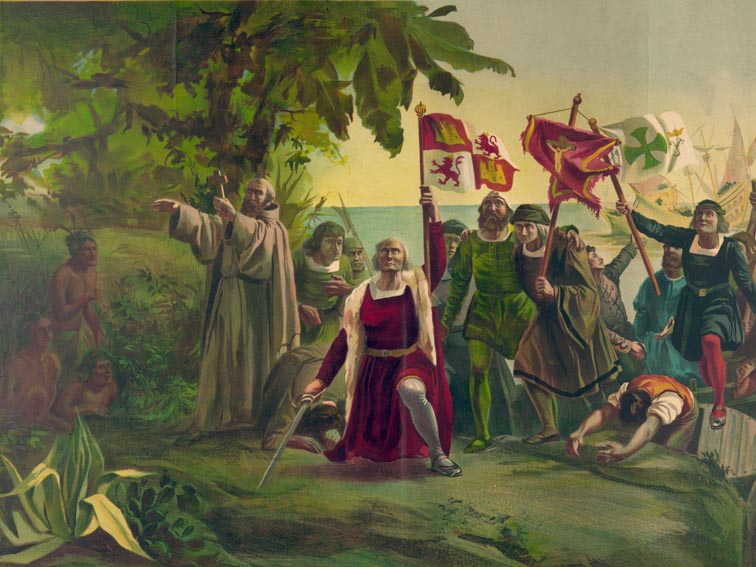 Columbus Day is serious business in my area, both in my role a history teacher, and in the geographic region in which I live.

Christopher Columbus is one of the top ten people who have influenced the world. Without him, our lives would be vastly different. He, among others, was responsible for bringing goods, languages, and religions to the New World and riches back to the old. As such, he is one of the most hotly contested figures on the planet.

Columbus Day is in a couple of weeks. Columbus Day leaves a legacy of slavery as well as worldwide cultural diffusion. It’s important–and challenging–to study with objectivity.

Every year, I pause my lessons to teach Columbus Day by reading a passage from historian Howard Zinn, who does not paint Columbus in the best light. It’s important to put both sides on the table, letting students consider the times in which these men lived. History is easy to paint in black and white, but the truth is, there are many shades of gray. I choose Zinn to help illustrate this. Most history books do not consider both sides of the Columbus Day debate.

I grew up with the “traditional” education on the subject of colonization. I drew pictures of the Nina, the Pinta, and the Santa Maria for October. I made hand-shaped Thanksgiving turkeys and collages of smiling colonists enjoying a Butterball with Native Americans in November. We do a much more reflective job showing history today. It’s important to stay honest when presenting controversial times from our nation’s past. Columbus Day is a day of the year where I stop to think about this with intention.

This week’s Learnist feature is about Columbus Day history, with some fun travel and tourism included as well. The issue of Columbus Day aside, it’s a beautiful time to travel the nation if you’re able to travel for the long weekend.

This board shows the alternative view of history. I hate to put historians in camps, but the truth is, even history has a spin. This board shows things that are often omitted from textbooks, including the Zinn project, the Native American thoughts on Columbus Day, and Columbus’ own journal.

The Last Voyage of Christopher Columbus

Columbus fell out of favor toward the end of his career. He was considered cruel. King Ferdinand and Queen Isabella financed one final voyage, however. Vivian Kerr chronicles the voyage on this board. Even for people in the know about the many sides of Columbus this board is interesting, bringing his last journey to life.

It is fair to say that most of the things we do today have been influenced by this period in world history. Foods traveled the globe, religions, ideologies, politics, livestock and languages came along for the ride, too. The conquistadores opened up the globe to the exchange of ideas and goods. For better or for worse, this changed the world forever. This board shows some of the effects of the Columbian Exchange.

Because of the large amount of Italian-American heritage in Rhode Island, Columbus Day has always been a big celebration. From festivals on Federal Hill, parades in Providence and Westerly, to the Scituate Art festival, it’s tough to escape the festivities…and the protests…that surround this holiday.

This is the formative period of world domination. This board, which Craig Sanders created for his college history course, shows clips from the earliest of American colonial settlements, including John Winthrop’s “City on a Hill” and information about the Jamestown colony.