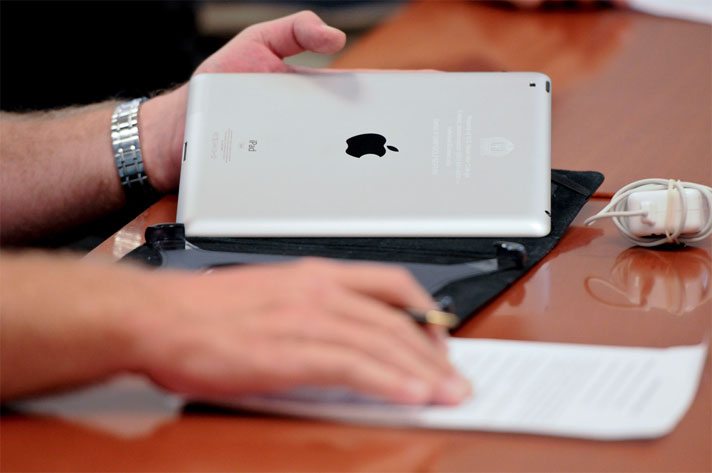 by Brenna Loury, Developer at Hop.in

The iPad is a device that inherently inspires creativity.

With its large, yet handheld screen and new 3.1 million pixel retina display that brilliantly showcases colors, crisp fonts, and detailed videos, it’s a dream for anyone obtaining an education. From elementary school children, to students studying for their Masters degree its no wonder that the iPad has become a key tool in many classrooms across multiple educational echelons.

As design-related degrees and professions become increasingly necessary in today’s digital job market, it is more important than ever to inspire both those imparting and obtaining an education to integrate more design material, apps, and activities into their daily routines. With these five applications available for iPad, introducing beautiful design and inspiring creativity among students of all ages is something any educator can do.

With over 187,000 users, Mural.ly is a way to virtually collaborate, creatively. Designed with creative professionals in mind, this software allows users to gather images, websites, audio and other multimedia to place together on a scrollable workspace that, like Prezi, expands both vertically and horizontally. It breeds beautiful brainstorming, creative organization, and group collaboration. Pricing ranges from free to $5/month for a Pro Subscription to $10/user/month for a Organization subscription.

A winner of this year’s Evernote DevCup for “best technical integration,” Hop.in is a free app exclusive for iPad and iPad Mini that lets users clip any digital inspiration from the web to their private or public profile– which is integrated with Evernote, Twitter, and Facebook. Saving anything from GIFs, to videos, to text from Hop.in’s built-in browser is as simple and quick as a double click, thus providing the most effective way to save any and all inspirational, web-based content from an iPad.

Designed by artists, this iPad app allows its users to find and develop their inner creativity with Tayasui Sketches’ seemingly real responsive canvas for drawing, watercolor-like painting, and handwriting. Strokes are nearly identical to that of a brush, adapting to the pressure, angle, and width of one’s movements. The app allows its users to import images to draw over, and lets one draw layer upon layer, undoing or redoing anything until the drawing is done.

Flowboard is a beautiful mix between a photo gallery and a power point software that allows its users to create flowboards, scrapbooks, or presentations that result in visually compelling works that are incredibly simple to create. With prefabricated templates and integration with cloud-based services like Dropbox and Google Drive, Flowboard provides the user a natural sense of control that makes it dead easy to arrange each word and image with “pixel-perfect precision.

For younger students, Hopskotch is an iPad app that allows kids to program their own games and animations, letting their creativity run wild while learning the basics of programming. The programming language Hopskotch uses works with drag and drop scripts that activate when “play” is pressed. As the students advance, they can add more features and custom events to run their code. Inspired by MIT’s Scratch, the app is ranked #6 in the AppStore’s Education section and is recommended for students aged eight and up.