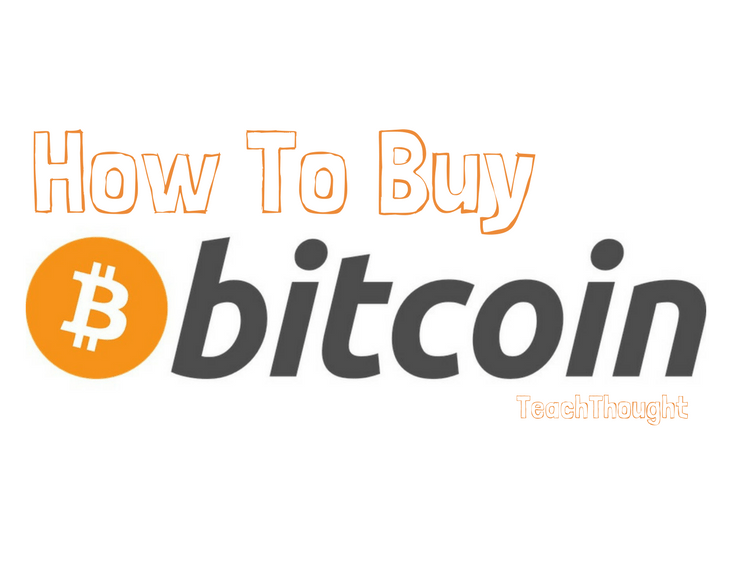 The following links are affiliate links. You can read more about our affiliate policy here, but the general premise is that we receive a very small % of revenue from anything you buy via clicking. If you want to make sure the seller receives 100% of any revenue, you can search for the product or service without using any links.

Disclaimer: This is not advice. Do your own research. Make your own decisions. Follow the advice of money experts, not educational organizations. This is for informational purposes only. We (TeachThought) are writing about Bitcoin because it’s a radical idea that is worth understanding if for no other reason than it could eventually change the idea of ‘money,’ or lead to the next technology that does.

Expect to keep hearing it.

We’re going to taking a deeper dive into Bitcoin in a separate post. For now, let’s focus on how to buy Bitcoin, and why you should consider it.

What Is Bitcoin? Bitcoin is a digital and de-centralized peer-to-peer system of currency. Think of it as like PayPal but not attached to a bank account and thus not ‘backed’ by the dollar.

Like any change or ‘trend,’ you don’t have to like it, support it, or participate in it, but ignoring it completely only threatens you, not the change. The first time we sent a text message with tiny little buttons on a tiny little plastic phone, it felt ridiculous compared to picking up the phone and making a call, much less an ongoing text message-based ‘conversation.’ Today, such conversations are considered by many as the norm. 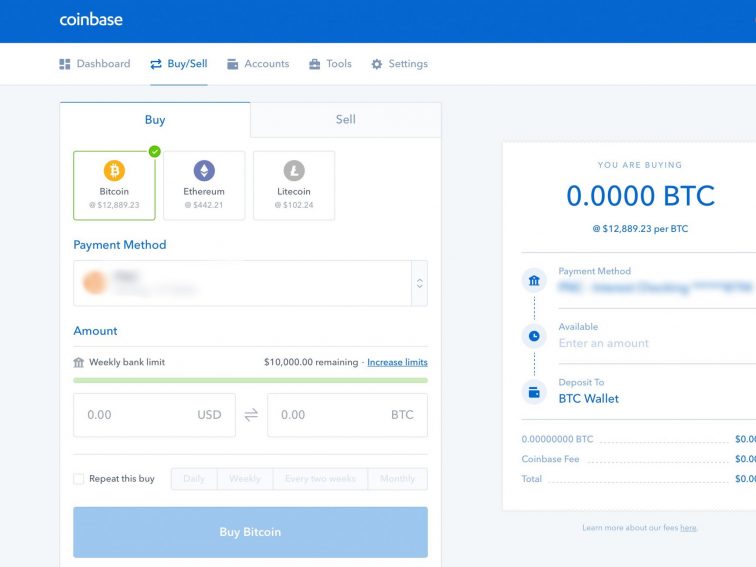 (Note how much the prices have changed since we took these screenshots this week.)

Sign up for an account, attach a card of some kind (debit, credit, pre-paid, etc.), and make a purchase just like you would at Amazon. Note, there are fees (charged by companies like Coinbase, not Bitcoin itself), and the most expensive way to buy Bitcoin is with a credit card through Coinbase, while adding money from your bank to your Coinbase account (which takes several days) and purchasing once the money in your account is less expensive. (Less expensive still is using Coinbase-owned GDAX, which we’ll also cover soon.)

For a little more more context, read below.

Whatever you do, do your due diligence, only take advice from financial experts, and don’t spend much when you get started (if you even invest at all; watching the market for a few weeks and seeing what you think is a safer alternative before diving in).

Bitcoin is a kind of cryptocurrency—a digital-only symbol of value. There is a lot that makes Bitcoin unique compared to other currencies. (If it wasn’t sufficiently different, there’d be no ‘need’ for it). However, its primary benefits are reduced transaction costs and increased security and privacy for users. (This is part of what makes it alluring to n’er-do-wells like members of organized crime.)

How Does Bitcoin Work?

As noted above, Bitcoin works a lot like PayPal—you send ‘money’ (Bitcoin) from one digital address to another.

You need a Bitcoin wallet, which isn’t a real wallet at all (though they make those, too). A bitcoin ‘wallet’ is just a digital destination for Bitcoin—think of it like an extremely secure mailbox. (And like a mailbox, if you lose the Bitcoin wallet you lose the Bitcoin, too. Remember, it’s decentrealized and there’s no ‘insurance’; and nothing ‘backing it up.’ It only exists because we all agree that it does.)

Because of the price of Bitcoin, transactions are usually in extraordinarily small ‘bits’ of Bitcoin. (.1 BTC is currently ~$1800, .01 is currently ~$180, and so on, which means buying a hamburger would be ~.000173 BTC, which certainly makes it less appealing to mainstream users—one of many reasons why it hasn’t been more widely adopted already.)

In short, it’s digital currency that’s sent digitally, though its most recent publicity stems from its potential as an investment rather than as a purchasing tool.

Bitcoin functions through a technology called blockchain, a kind of ledger which documents transactions. Harvard Business review describes blockchain as “an open, distributed ledger that can record transactions between two parties efficiently and in a verifiable and permanent way.”

Many have argued that the blockchain is a more critical technology than cryptocurrencies because it has so many other uses, from improving ethics in business to reducing fraud. (You can read more here.)

Unlike the US dollar, which is centralized (minted, printed, distributed, and otherwise controlled by the US government), the blockchain allows Bitcoin to be de-centralized—controlled by no one person, but rather merely documented by a system of computers which require a ‘consensus’ to function.

This ‘consenus’ safety-measure and de-centralized nature is designed to make it safer; while a single institution can increase, decrease, or otherwise control the value of a currency, because of the required ledger-checking consensus, the theory is that it’s more difficult to manipulate. All transactions are recorded on the blockchain.

It’s complicated, but so is the US Mint. And inflation. And how governments can operate with billions of dollars and debt for decades. You get the idea.

Like Buying A House Or Saving For Retirement, Be Smart With Your Money

Why you should consider buying Bitcoin depends on ‘you.

If you’re tech-savvy and have a little disposable income, you could consider buying it as an investment.

If you’re tech-savvy but don’t like Bitcoin’s volatility, buy a small amount to use to actually purchase something. (Crazy idea, but it is a currency.)

If you’re neither tech-savvy nor in possession of anything close to what you’d call ‘disposable’ income, it may be best to read a bit about it so you can impress your friends, then sit back and see how it all plays out over the next 12 (or more) months.

Google ‘Bitcoin price rises’ or “Bitcoin price falls’ or even ‘Bitcoin + crash” or ‘Bitcoin + bubble’ or any other collection of terms to see how volatile it is for buyers and investors and how scary it is for the ‘mainstream.’

As an educator and not a hedge fun manager, to you it probably all sounds at best absurd, and at worst like a Ponzi scheme. And it’s true that Bitcoin could crash tomorrow and fade away, primarily because unlike gold for example, the value of Bitcoin is all speculative. Gold can be used to make electronics and jewelry or to ‘back’ the US dollar. Bitcoin doesn’t ‘exist’ anywhere but digital spaces. But neither do websites. ‘Internet traffic’ has incredible value, but isn’t tangible either.

CBS News recently published an article that reflected a warning from the Securities and Exchange Commission (SEC) chairman Jay Clayton that clarified the unregulated status of Bitcoin, Litecoin, Ethereum, and other cryptocurrencies. The implication, of course, is that they’re a volatile ‘purchase.’

No matter how you frame Bitcoin as a concept in your mind, it is indeed risky. But the SEC’s warning isn’t purely altruistic. As with any industry, new ideas disrupt existing power holders, practices, useage patterns, the profitability of current business models, and more. Investment company CEOs have been known to decry Bitcoin as a ‘fraud’ (causing the price to drop), and then buy huge amounts of Bitcoin at that lower price.

While China and Russia have dabbled with the idea of banning cryptocurrencies altogether, the technology not only persists but thrives. In 2014, the IRS announced that cryptocurrencies were not, in facts, currencies at all but rather ‘intangible assets’ and taxed as such. In early December 2017, Goldman Sach CEO Lloyd Blankfein announced that they would begin trading Bitcoin futures.

In the last 12 months (from late 2016 to late 2017), Bitcoin has increased in price from $779 to more than $18,000, which is an absurd and downright unnerving return on investment. 2200% increases are uncommon, to put it mildly, which is why SEC chairman Clayton has advised investors to be cautious (as has the creator of crypto-rival Litecoin). Recently, a story surfaced of a guy suddenly ‘remembering’ he’d bought 1053 Bitcoins (likely for mere dollars each), a purchase worth more than $18 million by current Bitcoin values.

“Investors should understand that to date no initial coin offerings have been registered with the SEC…The SEC also has not to date approved for listing and trading any exchange-traded products (such as ETFs) holding cryptocurrencies or other assets related to cryptocurrencies.”

“If any person today tells you otherwise, be especially wary,” Clayton added.

And even if it fails, it very well may represent the beginning of a new digital economy with changes that those of us who grew up with coins and checks and dollar bills can’t begin to imagine.

6 Strategies For Creating An Inquiry-Driven Classroom

The Benefits Of Using Technology In Learning

While technology opens new horizons, adapting to this is more challenging. What are the benefits of technology in learning and...

For eLearning teachers, promoting critical thinking in online courses is a matter of combining student engagement, inquiry, and higher-level questioning.