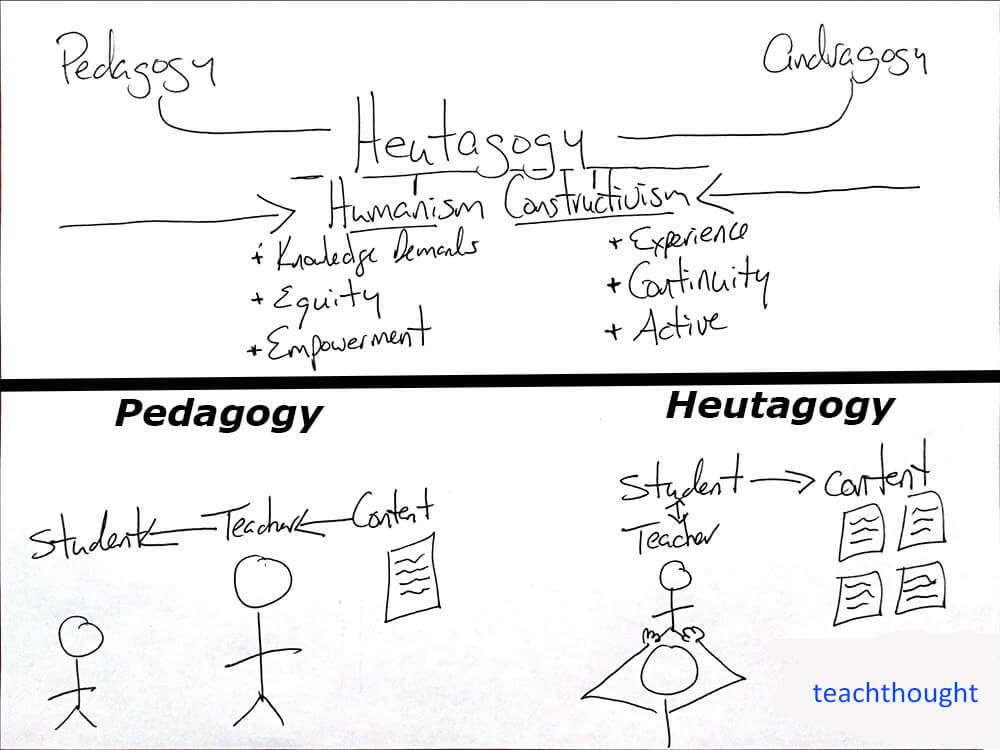 The Definition Of Heutagogy & Self-Determined Learning

Ed note: This is part 1 in a series on self-determined learning from Stewart Hase and Chris Kenyon. Stewart’s site, Heutagogy Community of Practice, is a useful resource for reading on Self-Determined Learning.

Ed note 2: Hase and Kenyon make distinctions between self-determined and self-directed learning that may be in conflict with our use of the terms (see, for example, our self-directed learning model). In most cases, these are matters of semantics rather than function, but having a common language is critical for communication, and we’ll continue to evaluate the phrases and labels we use in the larger context of the ed community.

This content is meant to do two things. It will, for the uninitiated, summarize the origins of heutagogy and the theories from which it was derived. At the same time, we will have a look at more recent work and thinking from authors around the globe and see what they have discovered through using or thinking about heutagogical principles. The main theme is that people are naturally very efficient learners and that we can more effectively make use of this fact in our current education and training systems.

The discussion came about as a result of general dissatisfaction with the way in which education was being conducted in universities. We thought that, despite the role of higher education to foster our brightest minds and to expand the frontiers of knowledge, teaching was primarily a pedagogic, teacher-centric, activity. To our way of thinking, teaching in our universities needed to be more aspirational. Like other humanists such as Carl Rogers (1969) we believe that the power to learn is firmly in the hands of the learner and not the teacher. We also recognize, as have Russell Ackoff and Daniel Greenberg (2008), that humans are from early childhood really adept learners and that much of the education system confuses learning with teaching.

In fact, there is sometimes so much confusion that it can interfere with people’s natural ability to explore, ask questions, make connections, and learn. This humanistic view of how people learn has been coined as student-centered learning (Rogers, 1969) or, more recently, learner-centered learning (Armstrong, 2012; Graves, 1993; Long 1990) as opposed to teacher-centric approaches. Recently I was asked to talk to a group of trainers working for the NSW Rural Fire Service in Australia. It was their annual conference and they were interested in finding more exciting ways to train their 70,000 or so volunteers in the various competencies required to fight fires.

I showed a picture of an ancient fire engine from the end of the nineteenth century but suggested that they think of it as a new piece of fire equipment. A teacher-centric approach to learning about this new equipment would be to show some pictures to the group, go through the manual, demonstrate the required skills, and then have the group practice until the required competency might be attained. A more learner-centric approach and rather more naturalistic would be to let the group go play with the machinery and leave the manual on the seat. 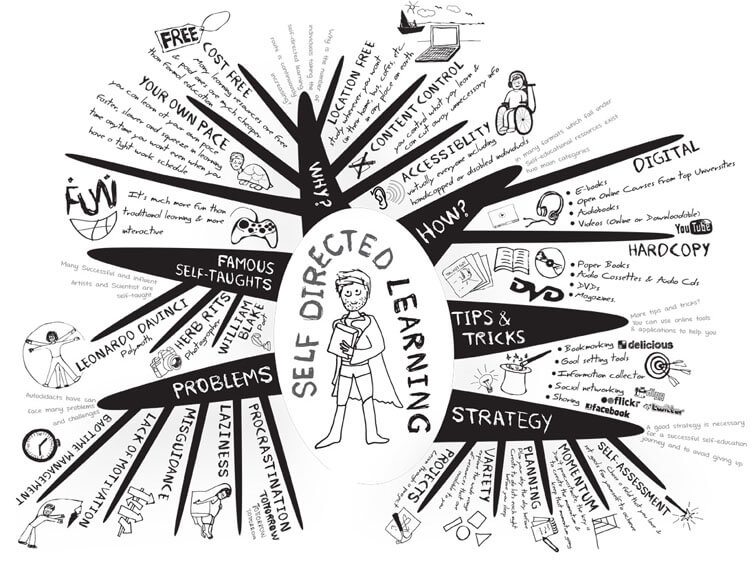 The facilitator can play an important role by watching and making sure that all is safe and intervening if someone is going to initiate a catastrophic event. Everyone agreed that, indeed, the group would work it out for themselves. Unfortunately, as Ackoff and Greenberg (2008) describe so elegantly, humans are hijacked very early in life by an educational system that was designed in the industrial revolution to educate workers to make the industrial wheel go around. Thus, education has become a commodity and the curriculum, chiseled in stone, is delivered by ‘experts’ from on high.

Assessment becomes the key to opening doors and teaching is geared to providing the key. The needs and motivations of the learner and, more importantly, what is happening in their brain is of secondary importance if it is of any importance at all. The late Fred Emery was a little more scathing in his assessment of the education system (1974, p. 1) when he said that, ‘School pokes your eyes out. University teaches you braille and postgraduate education is speed-reading in braille.’ Less controversially, a number of educationalists have questioned the assumptions that underpin common educational practice and the need for approaches that recognize the complexity of the relationship between the learner, the curriculum and learning (e.g. Davis et al., 2000; Doll, 1989; Doolittle, 2000; Sumara and Davis, 1997).

Current education practice places the process and outcomes of learning in the hands of the teacher who determines what is to be taught and how it is to be taught when, in fact, it needs to be in the hands of the learner (Coughlan, 2004). Given these beliefs about people’s ability to learn and an education and training system that disempowers rather than empowers, we decided on the term self-determined learning to describe this innate power of people to learn as an alternate view. Chris, the linguist that he is, then manipulated the Greek word for self, ηαυτος, and came up with the word heutagogy: the study of self- determined learning.

Heutagogy is underpinned by the assumptions of two key philosophies: humanism and constructivism. As mentioned above, the idea of the learner being central to the educational process is a humanistic concept. Carl Rogers later adapted his client-centered approach to psychotherapy (1951) to education (1969) in what was termed student-centered learning. Similarly, constructivism places the learner at the heart of the educational experience (e.g. Bruner, 1960; Dewey, 1938; Freire, 1972, 1995; Piaget, 1973; Vygotsky, 1978).

Constructivism is based on the notion that people construct their own version of reality using past experience and knowledge and their current experience. Thus, the learner is creative, actively involved in their learning and there is a dynamic rather than passive relationship between the teacher and the learner. Constructivism challenged educators to let go of some of the structure in what they did and allow greater dynamism into the curriculum. Constructivism led to a rise in the popularity of designing experiential learning as a means for loosening this control.

However, in our view, it did not have the impact on lessening the control of the learning experience by the teacher and hence education at all levels has remained teacher-centric. While many constructivist approaches cleverly engage the learner in experience and active learning, the teacher is still actively designing the learning task and process. In learner-centered learning tasks become less specific as control of learning is taken over by the learner (Coomey and Stephenson, 2001). Andragogy (Knowles, 1980, 1986) is also based on humanism and constructivism and was central to the original paper we wrote in 2000.

Andragogy was important because it provided an alternative to pedagogical approaches to teaching towards those more suitable for adults. Knowles was interested in the motivational aspects of adult learning and emphasized the previous experience of the learner, relevance, problems versus content, and involvement of the learner in the learning process. The idea of the self-directed learner can be sheeted back to Andragogy. However, while context might be in the hands of the learner, the teacher is still largely in control of process and task.

Unfortunately, some students of heutagogy refer to it as self-directed rather than self-determined learning: the two are perhaps related but quite different. Finally, Argyris and Schon’s (1978) notion of double-loop learning influenced our thinking about heutagogy and others have since associated the two concepts (e.g. Blaschke, 2012; Canning, 2010; Canning and Callan, 2010). Double-loop learning often occurs spontaneously and involves internally challenging our deepest values, beliefs, and ways of knowing.

While it is difficult to change any of these schemas that drive human behavior, it is at this level that the deepest learning occurs.

In Part 2, we’ll look at the neurology involved in this shift.

The Definition of Heutagogy; Shifting From Pedagogy To Heutagogy In Education;