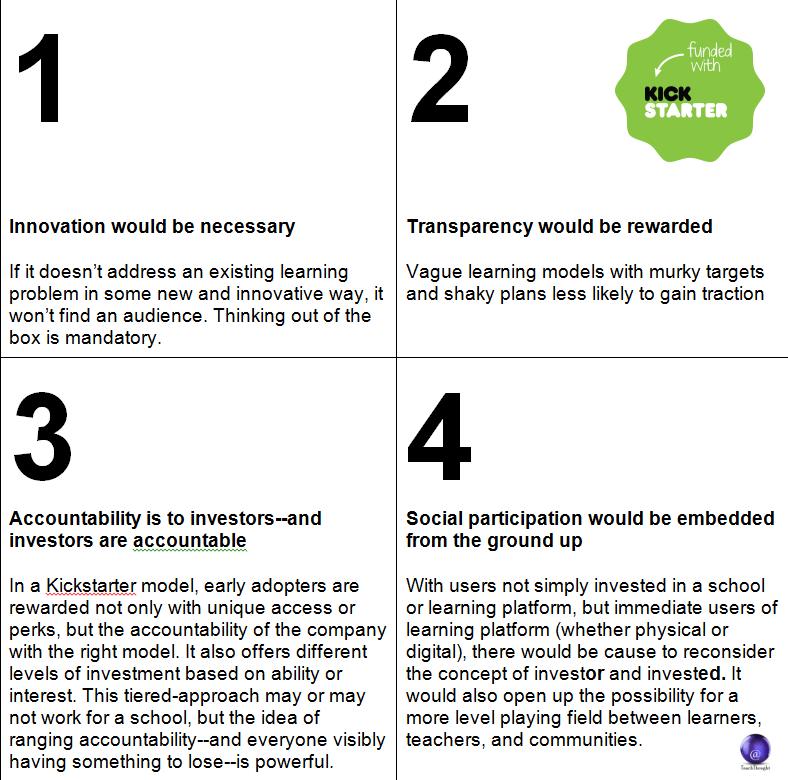 What Would It Mean If All School Started As Kickstarter Campaigns?

Kickstarter is doing something remarkable.

The website, which crowdsources raising capital by cultivating a community of “investors” eager to get projects they believe in off the ground, reverses the onus for evaluating the potential of an idea from seasoned investors to Joe Public.

In doing so, it’s allowing for good ideas to be given a chance not simply due to their perceived profitability, but by the passion of a userbase of literal investors. Those that invest are given access to the perks of their early adoption, incentivizing not only financial contribution, but guaranteeing at least some semblance of a user community upon launch.

While the long-term viability of such a model is still up for debate, anything that shifts old power (and disrupts) has to be a good thing. Right?

What would happen if schools were born this way–through pitching ideas to an attentive public who were invested in the project from the beginning?

26 Sentence Stems For Higher-Level Conversation In The Classroom

During meaningful conversations, students are forced to be accountable for positions, to listen, and to analyze opposing perspectives & ideas.

What is Connected Learning? An approach to learning that views interests and passions that are developed in a social context as essential.

63 Things Every Student Should Know In A Digital World

In an increasingly digital world, the things a student needs to know are indeed changing–sometimes drastically.

The shift toward a fluid, formless, socialized nature of information, thought, and belief is a not a small one.