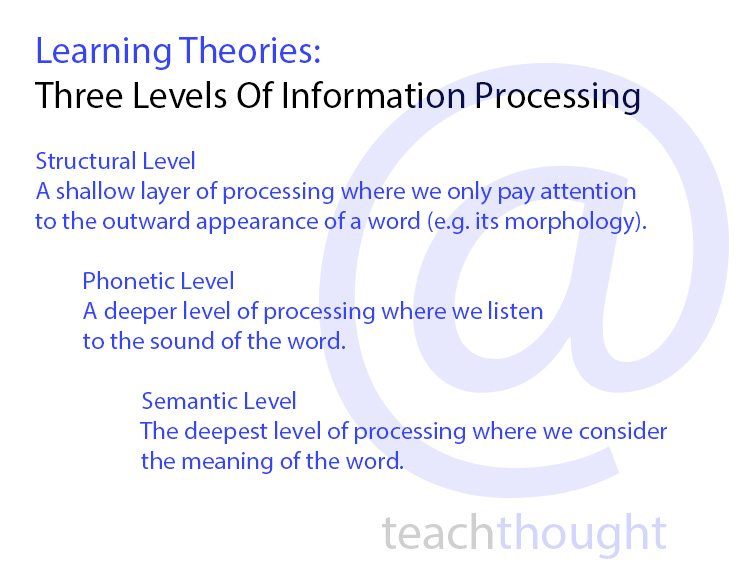 This is number 5 in my blog series on major learning theories. My plan is to work through the alphabet of psychologists and provide a brief overview of their theories, and how each can be applied in education. In the last post we examined the work of Jerome Bruner on scaffolding.

In this post, we explore the work of Craik and Lockhart on levels of processing. This is a simplified interpretation of the theory, so if you wish to learn more, please read the original works.

The history of human memory research has strongly featured differences between types of memory such as Working Memory (previously known as Short Term Memory or STM) and Long Term Memory (LTM). Other explanations of memory have focused on the functions of various types of memory, and such approaches are often referred to as multi-store theories.

When Fergus Craik and Robert Lockhart researched human memory and recall, they argued that there was no clear difference between what others had identified as seemingly discrete memory stores, but that all memory was a result of the depth to which information was processed in the mind. Instead of referring to different stores of memory, Craik and Lockhart proposed that there are different levels of information processing. They identified at least three levels:

1. Structural level: This is a shallow layer of processing where we only pay attention to the outward appearance of a word (e.g. its morphology).

2. Phonetic level: This is a deeper level of processing where we listen to the sound of the word.

3. Semantic level: This is the deepest level of processing where we consider the meaning of the word.

Craik and Lockhart claimed that the deeper the processing, the stronger will be the trace of that memory, and thus recall will take less cognitive effort. This framework for human memory research is considered by many cognitive psychologists to be a stronger explanation than those of the multi-store memory models. Levels of processing theory certainly does seem to explain more about the human memory than the multi-store theories, although the framework has also attracted some criticism. It has also influenced other recently proposed cognitive processing theories including spreading activation theory and neural network theory.

Teachers should be aware that children can process information in different ways and at different levels as they transform it into knowledge. Educators should think about how they can encourage students to process content in deeper and more meaningful ways. For example, students process content more deeply if they have to discuss its meaning, or are involved in solving a related problem.

Educators should also give students opportunities to present their learning through seminars, or through the creation of artefacts (e.g. blogs, videos, posters) to deepen the semantic processing of their learning, thereby strengthening their memories. This is one reason why participative and active forms of learning are more powerful than direct instruction through didactive methods.