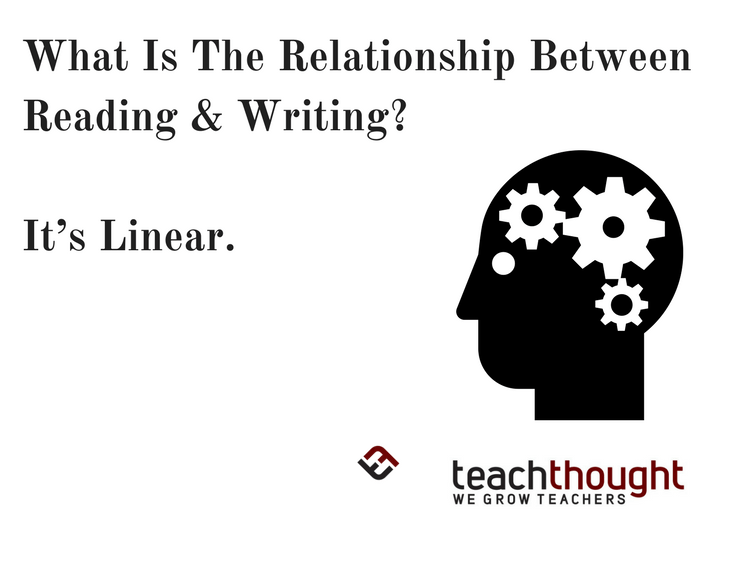 How Can Schools Produce Better Readers? Write Twice As Much With 1/2 The Rules

In a wide-ranging interview, ASU researcher Steve Graham noted that reading and writing skills are closely linked—and each helps improve the other. He also revealed four other key insights about writing instruction.

Reading and writing are forever intertwined.

They draw upon shared knowledge bases, and they work together in helping students learn about a particular subject. And it turns out they also help each other, says researcher Steve Graham.

Graham is the Mary Emily Warner Professor in the Division of Leadership and Innovation at Arizona State University’s Mary Lou Fulton Teachers College. For more than 30 years, he has studied how writing develops, how to teach it effectively, and how writing can be used to support both reading and learning.

See also Why So Many Students Dislike Reading

Recently, Graham was a guest on a podcast series produced by Turnitin, called The Written Word. During the 40-minute podcast, he talked about the relationship between reading and writing, specifically how students become better writers the more they practice reading—and how the opposite holds true as well: As students write more frequently, their reading skills improve.

Graham has co-authored two meta-studies that delve into existing research to determine writing’s impact on reading and vice versa. In the first meta-study, he found that when students write about material they are reading, they tend to understand the material better and retain it longer over time.

He also found that as teachers increased the amount that students in grades 1-6 were writing, there was a corresponding improvement in how well they understood texts. And when educators taught writing as a skill, not only did students’ writing improve—but their reading skills also got better.

“To put this in very simple terms, if you teach writing, you get better readers,” he said. “We found improvements in how well students read words, how fluent they were, and how well they comprehended texts.”

Practicing their writing skills helps students identify with the author as they are reading a text, Graham explained. “When you’re planning a (writing assignment), you have to think about who’s going to be reading it and what your goals and purposes are. That makes you more aware of the reader. And so, when you’re reading texts, there is more likelihood that you’ll put on that metacognitive hat and think about what the writer is doing, because you’ve been engaged in that same process as the writer was.”

Similarly, the second meta-study found that when educators teach reading skills, “there is a corresponding positive effect in how well students write,” Graham said. “We also found that when you increase how much students read, they become better writers. Reading allows us to capture information that is useful when we write.”

For the last decade, Graham and his colleagues have surveyed teachers nationwide about their writing instruction.

“I think one of the primary issues in developing stronger (reading and) writing skills is that we’re not doing enough to help students become better writers.”

How Can Schools Produce Better Readers? Write Twice As Much With Half The Rules

Teachers tend not to give writing assignments because they feel paralyzed by the need to give detailed feedback. But a little feedback goes a long way. Graham says it doesn’t have to be that way.

“I sometimes say to school administrators: ‘We need to double the amount of time that students write.’ Immediately, I get pushback,” Graham said. “Administrators will say, “Our teachers don’t have enough time to give feedback on all the writing they have their students do now—and if we increase this, it will just be impossible.’

“My response to that is, you don’t need to give feedback on everything that students write. If they’re writing something for a learning purpose, we don’t need to turn that into, ‘Let’s make this the best paper possible.’”

Teachers often feel like they have to correct every assignment as if it’s the last chance they’ll have to give students feedback about their writing, he said. So, they give feedback on every single point they see.

“I actually think that can be debilitating for many kids. It’s overwhelming,” he noted. In reality, just two points of encouragement and two pieces of constructive feedback are enough for each assignment.

Writing As A Group Activity

“We tend to think about writing as a solitary activity. But it’s not really,” Graham said. “We’re always writing for an audience. A lot of the writing we do outside of school involves interaction with others. Think about social networks now: We post something online, somebody responds, we respond back. There’s a lot of interactive writing going on.”

When students can observe the reaction of others to the writing, “it makes things more fun,” he said. “It makes the audience real to the writer. When we’re writing something and our audience isn’t the person sitting next to us, or we never get to see how they interact with that text, the audience becomes less important to us.

“Doing something so that we can see the reaction of the audience—and I would expand this to include writing something that has a real purpose—increases the likelihood that we’ll engage in an effortful manner in that writing activity. I think that’s particularly important.”

“I’m almost 70 years old. At no time in my life has there been more writing going on—and you might say reading—than there is now. And it’s due to social media,” Graham stated

“I was in Australia about two years ago, and I was walking in Brisbane along the river. I came around a corner, and there must have been 200 young people. Not one person was speaking directly to each other. Everybody had their phones out and were interacting on their phones. If I had seen that 15 years earlier, I’d have thought I was in a science fiction movie.

“Yet, everybody was communicating in one way or another. Now, adolescents probably wouldn’t have called that reading and writing. But reading and writing take on a larger role in our world today than anytime I can think of. We’re doing this constantly. And one of the things that develops as a result of that is fluency.

“The more we write, and the more we read, the more fluent we get—and that has a positive effect.”

‘Connecting the worlds of formal and informal writing…’

He continued, “One of the biggest complaints about (social media use) is that the world is going (downhill), because the things we do when we tweet are sneaking into when we write in other situations. Quite honestly, that has always been going on.

“Written language is fluid; it moves and it changes. What students have to do is learn the (conventions) they should use when communicating in different situations. And this is true for all of language. We don’t curse around our parents. We learn that, and if we’re smart, we don’t do that. Just like when you’re doing a formal paper for a Ph.D., you’re not going to have emoticons jumping in and out.”

Educators can use these situations as teachable moments in their classrooms, he said—and they should look for ways to connect the worlds of formal and informal writing. These digital capabilities are completely changing the way we think about writing,” he concluded.

“It’s not just written words anymore. It can be text, it can be pictures, it can be film. All of those things can be combined to communicate and to share ideas.”

Dennis Pierce is a freelance writer with 20 years of experience covering education and technology. Follow him on Twitter @denniswpierce

How Can Schools Produce Better Readers? Write Twice As Much With Half The Rules