Want To Become A Better Teacher? Try Slowing Down 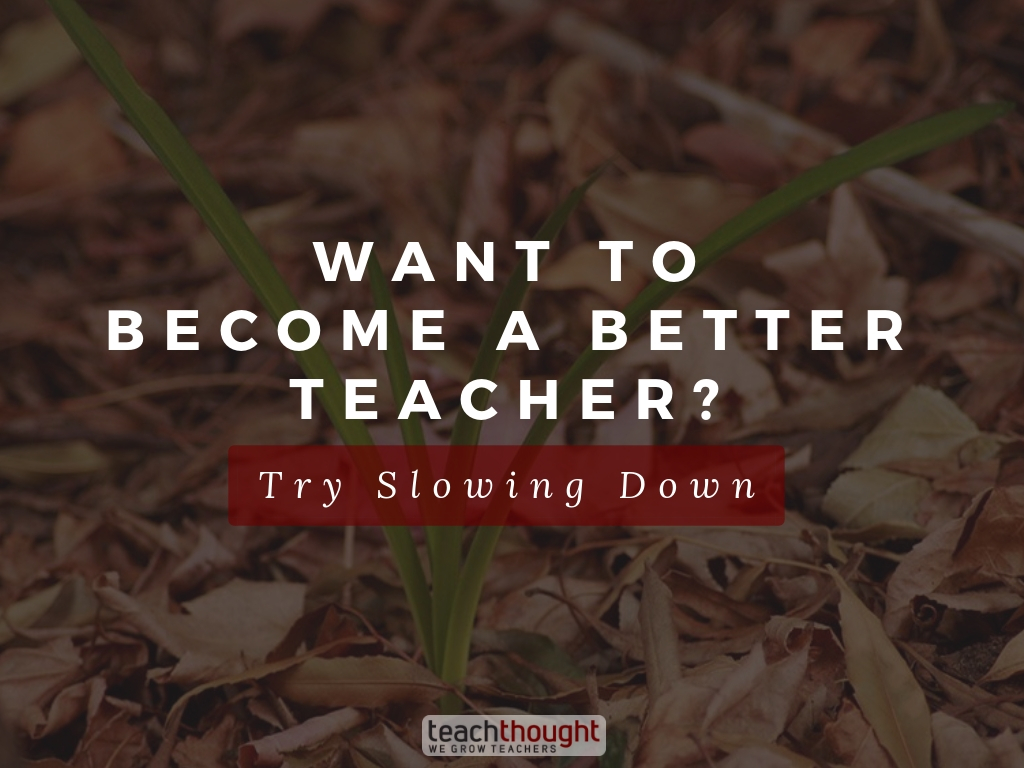 Want To Become A Better Teacher? Try Slowing Down

The gift of my fifth year of teaching was patience.

Every year something new occurs to me as an educator, and for year five it was the insurmountable scale of process. This was partly a response to beginning to see the things that were in my control, and the things that were not. To see the sequence between this thing and that place with that student clarified it all quickly.

All year I worked with my students to loosen them and wake them up—to get them agile and responsive and able to move laterally in their learning as they consider task, purpose, technology, and place. To look first inside themselves, and move outward from there.

On a daily basis, I fought my instincts to plan and control and cause, and their instincts to be ‘finished,’ listless, and compliant. There were times I thought we were dead in the water, but a few months ago they started to respond, and just in the last few weeks started moving through ideas and projects faster than I can chase them.

Which is exactly what I want.

So many times I almost quit. I blamed culture, literacy, technology, myself, Minecraft, Justin Bieber, and everything else that didn’t jive with my ‘vision.’ But it was growing the whole time–I just couldn’t see it because I wasn’t looking in the right place.

As a teacher, you may come across a strategy, technology, or learning model that knocks your socks off, only to give it a shot and be underwhelmed at the results. It very well could be that you’ve got a bad idea.

But it also might be that you’re teaching students so accustomed to other ways that everything you say sounds like crazy talk. That you teach on a ‘data team’ that wants you to be more streamlined—to teach just like they do. That you’re trying to lead an entire school of fish upstream, which is real work.

Trust yourself to figure to know when to cut your losses, and when to stick it out.

For one, there is always an implementation dip–a period after integration when things go south. Whatever you’re trying to accomplish, you probably don’t fully understand this “great new thing” as well as you think you do. Which means you probably explain it clumsily, use it inefficiently, and aren’t sure how to trouble-shoot when things go awry.

In an era of pressure, maps, PLCs, and pacing guides, forgive yourself for not having all the answers. For learning on the job. For not being able to fully explain why a student is struggling. This doesn’t excuse “accountability,” but rather honors the teaching and learning process as something greater than the scientific collision of students and standards.

Rather than an excuse, patience can keep you from overreacting. It can force you to sit with the assessment design, or assessment results just a bit longer to see if something reveals itself. It can keep stress from shutting down your creative thinking and resorting to crazy-panicked teacher mode where no one wins and you’re exhausted.

All of education may seem like it is trying to exert its will on your classroom. Let it push.

You’ve got work that is both creative and scientific. Human and technology-based. Two minds that can’t possibly be rushed.

You’re growing things, after all.