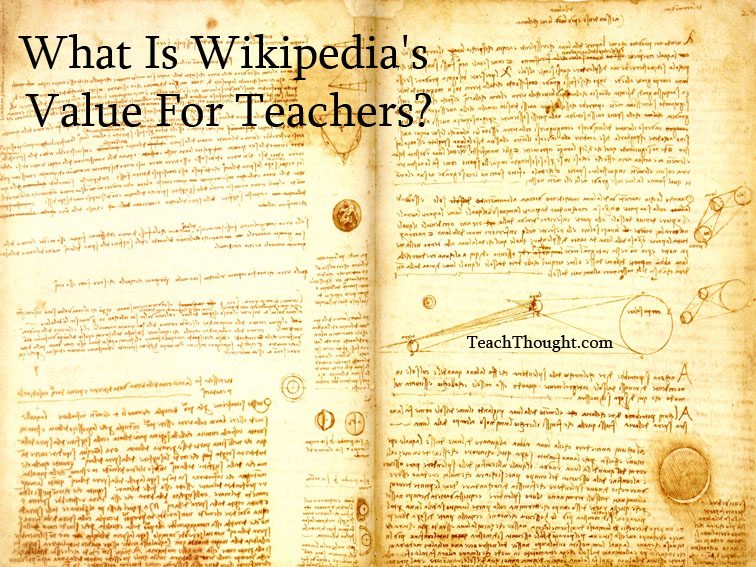 What Is Wikipedia’s Value For Teachers?

Imagine a digital pile of everything we know.

Or that we notice and think about. A kind of codex for humanity, in the form of encyclopedic entries on everything from String Theory & Quantum Mechanics, to a listing of every single ancient Jedi, Bigfoot trap, and internet meme there’s ever been.

And it’s done not by one person, but by anyone that knows something. And even if they don’t fully understand that thing, they can contribute something. They may not fully grasp the historical context of Martin Luther King Jr’s “I Have A Dream” speech, but they can tell you every single rap song they’ve heard reference it.

Never mind your internal alarm for accuracy and academic credibility–or substance, for that matter–let’s consider the significance of this for a moment. What we, as open-sourced contributors, chose to include in this pile implies something. Something of perceived utility or interest. Not necessarily substantive or worthy or extended study, but emphatic enough to be noticed and documented by someone.

Simply surveying what we chose to include in this “digital pile of everything” would be as interesting as the scrutiny of the individual items themselves, like sifting through the trash (or treasures) of an ancient culture for clues.

That, more or less, is Wikipedia, and in our lambasting of it and other crowdsourced projects that aren’t created purely by scholars (and make no mistake–a significant portion of Wikipedia is indeed contributed by scholars), we assume that Wikipedia isn’t accurate, a tempting conclusion due to the anybody-can-edit-it wiki structure.

And one that may not even be true.

Because of whimsical entries and shaky credibility and a million other reasons, Wikipedia is as polarizing a digital character as there is in the education technology world. But what if we just used it differently? What if we considered this massive chaotic and constantly churning stream of information as a starting point for understanding, the same way we might think of twitter or facebook?

What if we created a unit that studied the sociology of collaborative writing, or the cultural reasons a former B-movie actor’s entry detailing his struggles with drug abuse has more words than the aforementioned work of genius by Dr. King?

So instead of railing against it, we tried to understand it. Like it or not, it is a symbol of a new approach and structure of information. From the endlessly curious entries, to the “needlessly detailed” missives, to the persistent requirement to stay on your toes and think critically about what you’re reading, Wikipedia is a slick-haired but endlessly charming and charismatic salesman of information and perspective that represents an uber-modern way of collecting and curating what we think as a culture.

That’s got to be good for something, right?

To get started, you can find our Teacher’s Guide To Wikipedia In The Classroom, and take to the comments below with ideas, questions, or resources worth knowing.

What Is Wikipedia’s Value For Teachers?; Image attribution vincihammer