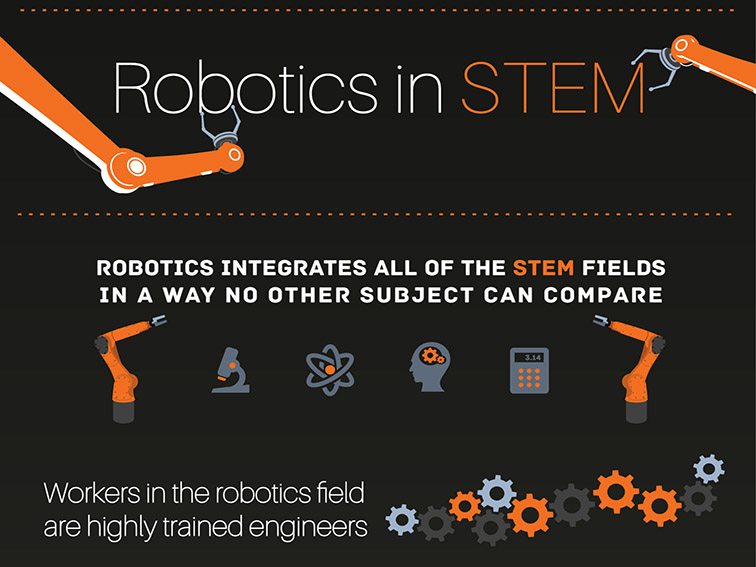 Infographic: Robotics And The Future Of STEM

According to an article titled, “Investment in STEM education adds up,” by Lauren Foreman, there is notable concern that demand for skilled workers in science, technology, engineering and math fields, or STEM, will outrun supply. That’s why companies such as Chevron has stepped up by allocating between $750,00 and $1.25 million to the Kern High School District as part of a local version of the national STEM program, Project Lead the Way.

Foreman’s article points out that employees that are currently filling these job roles are aging out, and many schools have pushed vocational programs that prepare students for these roles to the wayside. The goal is to prepare students now for these job roles, so that this growing field has the educated support that it requires. More funding for STEM education in schools has been the priority in parts of California. Local school districts plan to use that funding to train students as early as junior high in robotics, engineering design, and 3-Dimensional printing, according to the article.

Due to the wide use of the internet and the accessibility of it, educators find that they need to reinvent their approach to teaching in order to accommodate the growing technology-driven world, providing their students with real-world applications. Creating environments that promote hands-on learning will likely encourage students to continue education in a STEM field.

The Future Of STEM In Education?

In a September 2010 speech, President Barack Obama stated that “…Leadership tomorrow depends on how we educate our students today- especially in science, technology, engineering and math.” In order to showcase the importance of the increasing role that robotics can play in STEM education, KUKA Robotics has created the infographic below. The following are statistics that stand out on the infographic:

This infographic also promotes KUKA KORE, a program offering high schools, tech centers, community colleges and universities the opportunity to take advantage of certified robot education on KUKA products by incorporating them into their very own STEM, Advanced Manufacturing and Mechatronics programs. This will allow students to learn basic robot programming and operation skills on exercise hardware, gaining experience of robots and control technology that is already used in a variety of industries. Educators and students have the opportunity to be trained using advanced robotic technology.

In order to promote the priority for STEM education across the United States, the committee on STEM Education, or CoSTEM, plans to facilitate a national strategy in order to reorganize STEM education programs and increase the impact of federal investments according to the United States Department of Education. This strategy involves areas including: public and youth engagement with STEM; improving the STEM experience for undergraduate students; support of groups that are underrepresented in STEM fields; and also designing graduate education programs for the future STEM workforce.