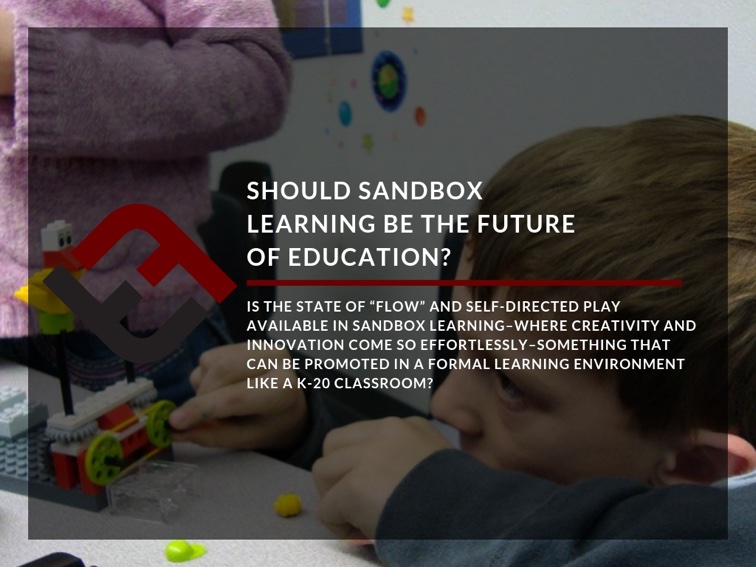 Should Sandbox Learning Be The Future Of Education?

Two decades into the 21st century, highly-structured, formal learning environments may have run their course.

If nothing else, they have a pronounced limp and awkward speech patterns that students are increasingly finding, well, academic.

In many ways, the internet was the catalyst for this. As blogs and social media exploded in popularity, they have subsequently de-credited major news media in the process. Individuals–through digital tools, media, and platforms–have became, for many, as important as major news and media outlets. Social media channels like twitter and facebook are both the crowd’s chatter and credible sources of perspective and information.

And this change has been neither minor nor gradual.

The best example of this might be the video game community, where many software developers have found success not so much with games, but equipping users with the tools to create their own games. By releasing these tools for users to design their own content, levels, maps, etc., games moved from ‘here, play this,’ to ‘here, do or make something cool.’

Little Big Planet, Garry’s Mod, Minecraft, and others have excelled here by simply doing less. In Little Big Planet, developer Media Molecule created a brilliant digital sandbox for learners to ‘play’ in. And such ‘play’ is not a by-product of the game, but is the game itself. No goals, no ‘win’ conditions–just a big pile of cool stuff to mess around with and share with your friends.

Even games with heavily-scripted narratives—such as Fallout 4, Assassin’s Creed, and others are built around a play-how-you-want philosophy. Players are given goals and a story, and use their own strategies and philosophies to accomplish them. In fact, many of these games don’t even require that you achieve a goal. You just play.

And the best part is that this laissez-faire approach doesn’t erode the credibility of the game or how much fun it is to play, but rather increases it exponentially by changing the terms of engagement between user and media entirely, moving from passive, compliant, and on top of the game, to active, challenging, and within the game.

The play–and not the dogged pursuit of goals–is the game.

Facebook, for all of its inherent flaws and questionable policies, has taken a similar approach. Connect with people, companies, and news how you’d like. Hide them, respond to them, de-friend them, like them, comment on them. You’re active, engaged, and to a degree, in control the entire time.

Google Music or Spotify? Download only the songs you want.

iPads? You’re still stuck with a walled garden, but the apps, the mobility, and the communication avenues are all yours.

YouTube? Do whatever, film it, and grow a community around that behavior.

Netflix and HBO and Disney+? Stream what you want.

Platform-thinking doesn’t just ‘let’ users do things, it can’t survive without it.

This is would-be ethos of sandbox learning.

The takeaways here for education are nuanced. This shift isn’t simply about choice or personalization. It’s about a new locus of control–about offering new power to users. And even when that power is simply an illusion, the message is clear: the 21st-century is about, among other themes, identity and connectivity.

Except that very little of this applies to education.

In college, students get some degree of choice–this major, that instructor, etc. But overall, K-20 learning is about institutions, and this has been true for over a century. The net result has been a society with very little capacity for mastering the process of learning itself, and generations of students that went to school to ‘get a job’ rather than in dogged pursuit of innovation, genius, or critical thought.

But play can change that.

If you’ve ever taught–or even just watched someone learn something new–the role of play in learning is fascinating. In sandbox learning, learners are able to directly interact with content without the intrusion of monitoring, assessment, or having to decipher ‘teacher messages.’ When this happens, there is more willingness to experiment, to understand, to follow curiosity, and to hold one’s self accountable to personal standards for achievement. And this is not a matter of simply moving from extrinsic to intrinsic motivation, but has more to do with sitting ‘first-person’ in the learning process.

Not on the game but in the game.

One immediate effect of this is personalization of learning, for the learner, by the learner. Self-direction is extraordinarily powerful when combined with a supporting framework, e.g., communal constructivism, digital technology, and creating learning through play.

The question then becomes a matter of logistics for teachers: Is the state of ‘flow’ and self-directed play available in sandbox learning–where creativity and innovation come so effortlessly–something that can be promoted in a formal learning environment like a K-20 classroom?

Can a ‘sandbox approach’ of combining self-directed learners in playful, authentic and often digital environments yield the academic and personal growth educators require and families deserve? As K-12 public education systems buy stock in data, standards, and polices that are blurry to families and communities, returning the power back to the learners—through a sandbox approach–may be the only thing that can save education as we know it.

If you want to teach kids, by all means teach them. Help them build background knowledge and develop skills. Have them jump through your hoops, and hand them little sugar cubes when they do it right.

But if you want to see their genius, watch them play.

Should Sandbox Learning Be The Future Of Education? Image attribution flickr user flickingerbrad;