In part 1 of this series, we took a look at the definition–and scale–of the sexting craze. The takeaways from that post were simple–sexting is an increasingly common trend among teens and adults alike.

Now we’re going to take a look at an app designed–or seemingly designed–to be very, very good at sexting.

Snapchat was developed as a simple way to share videos and images via text message. The twist? These images can be set to self-destruct after a set period of time, which makes them perfect for taking–well, you get the idea.

While there are plenty of teens that use snapchat for perfectly innocent and typically trivial things, it’s difficult to ignore the elephant in the room: Why are you sending pictures that must be quickly deleted?

CEO Evan Spiegel actually claims that the app has nothing to do with sexting, explaining in an interview with digitalifetoday, “On Snapchat, any image you send could be saved forever, whether it’s by someone taking a photo with another camera or by someone taking a screenshot, so it’s not a great place to send photos that you want to be secure.”

And therein lies the rub: as soon as the text is sent, self-destructing or not, users can take a screenshot that captures the image. Snapchat doesn’t disallow this, but it does send an alert to the user telling them a screenshot has been taken.

It’s difficult to argue the implications of a self-destructing text message; no matter the intent, it’s clearly the connotation. But blaming the app is kind of missing the point, isn’t it?

Tomorrow, we’ll look at how teachers can deal with sexting in the classroom–or outside of it–both directly and indirectly. For now, check out the infographic below. 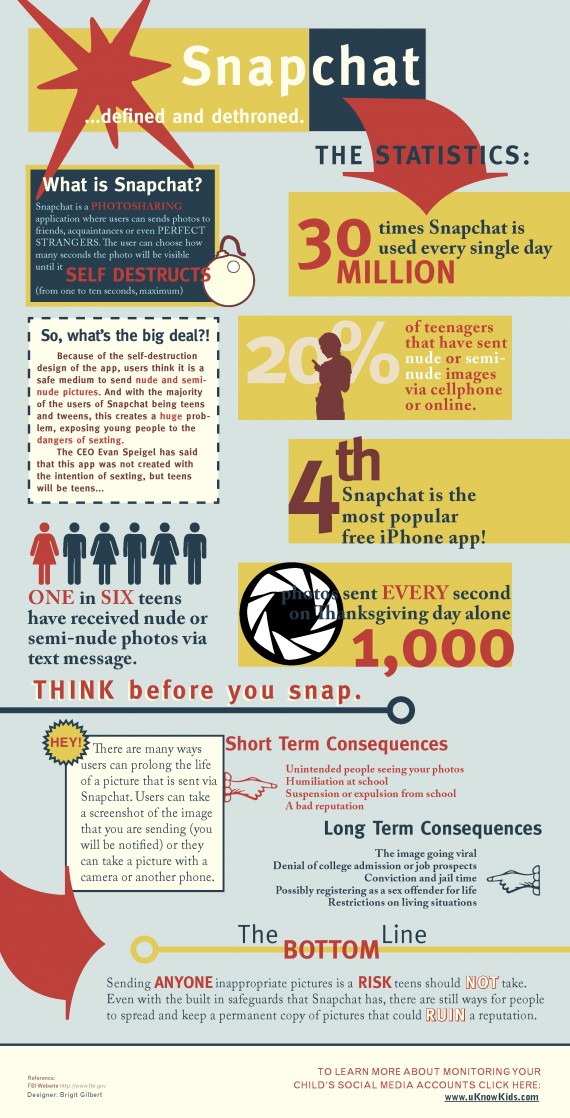