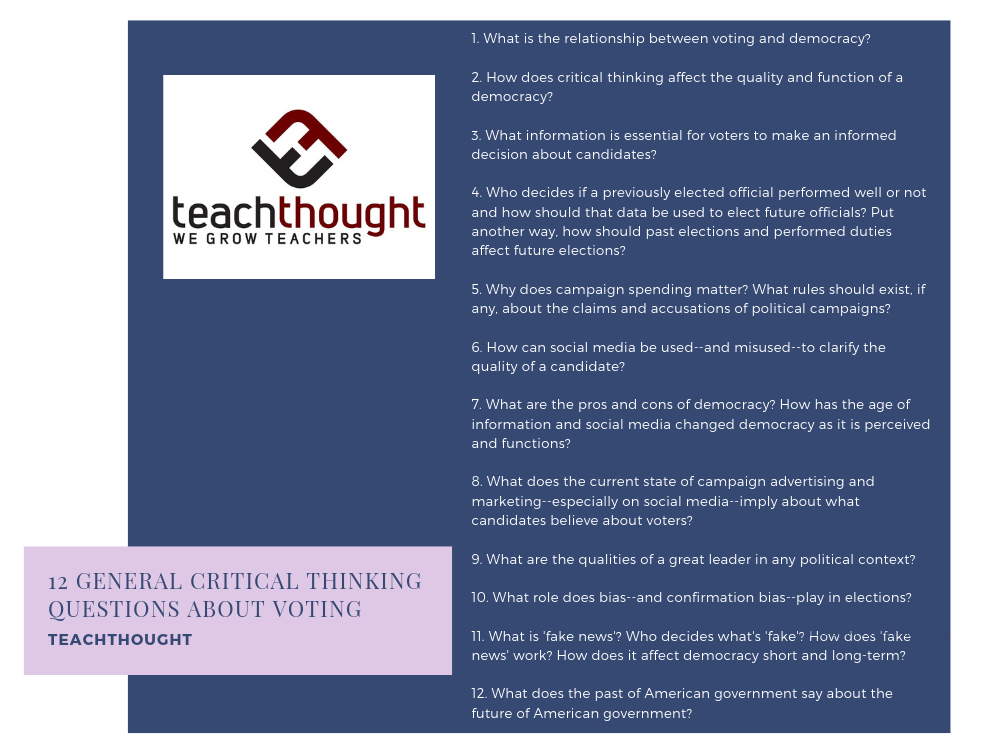 Some questions for student critical thinking: What is the relationship between voting and democracy? How does critical thinking affect the quality of a democracy? What information is essential for voters to make an informed decision about candidates? pic.twitter.com/0EODQbrLAO

1. What is the relationship between voting and democracy?

2. How does critical thinking affect the quality and function of a democracy?

3. What information is essential for voters to make an informed decision about candidates?

4. Who decides if a previously elected official performed well or not and how should that data be used to elect future officials? Put another way, how should past elections and performed duties affect future elections?

5. Why does campaign spending matter? What rules should exist, if any, about the claims and accusations of political campaigns?

6. How can social media be used–and misused–to clarify the quality of a candidate?

7. What are the pros and cons of democracy? How has the age of information and social media changed democracy as it is perceived and functions?

8. What does the current state of campaign advertising and marketing–especially on social media–imply about what candidates believe about voters?

9. What are the qualities of a great leader in any political context?

The Most Important Question Every Assessment Should Answer

15 Questions Students Can Ask Themselves When Learning New Content

When introducing students to new content, the right questions and language can help disarm uncertainty and encourage students to develop...

The 4 Cs: A Framework For Improving Math Skills

The Four Cs stand for Converse, Count, Compare, Categorize, each of which are critical to the development of a young...