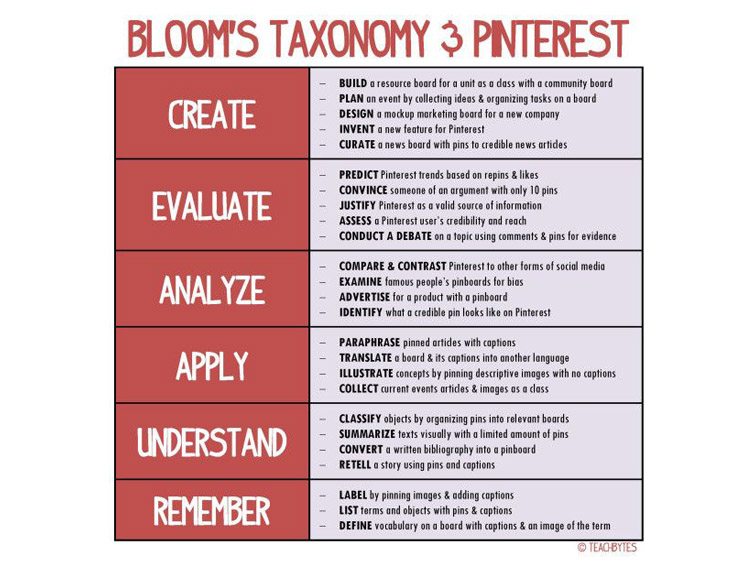 Social media is a waste of time, they say.

It’ll rot your brain, they say.

Pinterest is all Ryan Gosling, misleading pictures of food, and weight loss tips, they say.

Well, the Ryan Gosling part is mostly true, but it doesn’t have to be that way. If you’re interested using social media in your classroom, we created a “twitter spectrum” last year that offered 25 ways to use twitter in the classroom, organized by complexity.

We followed that up with a similar graphic on using iPads in project-based learning, also organized by complexity, each graphic designed to help you frame your planning around the cognitive activity of students, rather than the tool or technology. And it’s in that same vein that the above image by teachbytes was created.

1. Define vocab on a board with captions and an image of the term

5. Convert a written bibliography into a pinboard

6. Summarize texts visually with a limited number of pins

8. Collect current events articles and images as a class

9. Illustrate concepts by pinning descriptive images with no captions

10. Translate a board and its captions into another language

13. Advertise for a product with a pinboard

15. Compare and contrast pinterest with other social media platforms

16. Conduct a debate on a topic using comments and pins for evidence

19. Convince someone of an argument with only 10 pins

20. Predict trends based on pins and likes

21. Curate a news board with pins to credible news articles

23. Design a mockup marketing board for a new company

24. Plan an event by collecting ideas and organizing tasks on a board

25. Build a resource board for a unit as a class with a community board