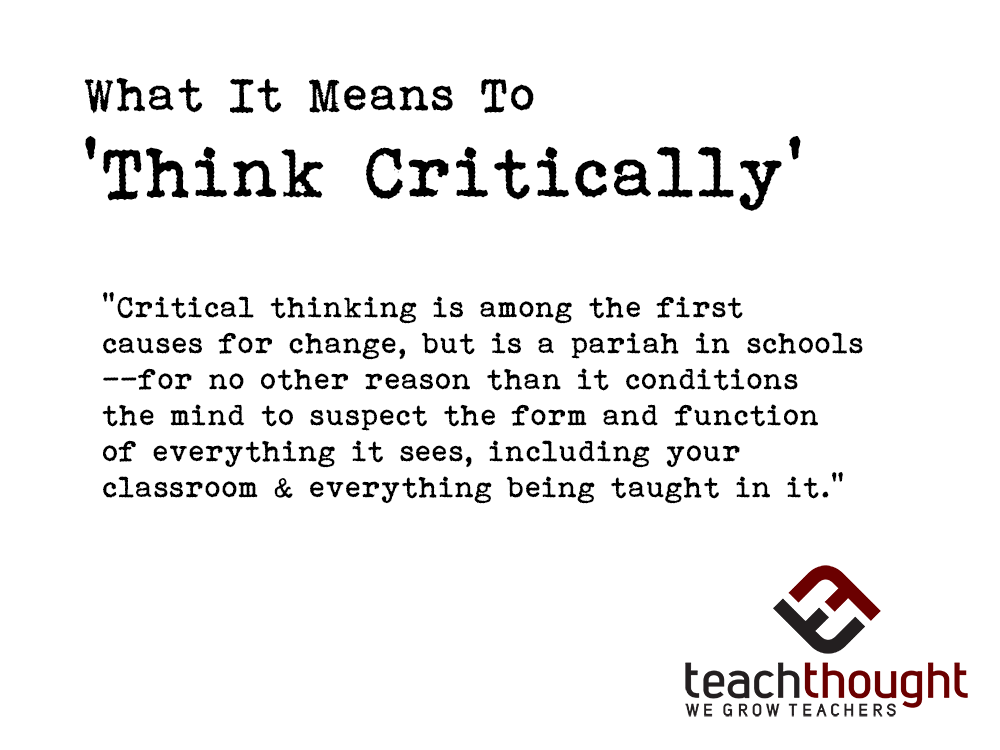 What Does ‘Critical Thinking’ Mean?

What does ‘critical thinking’ mean?

Well, that depends on who you ask. For educators, as a term critical thinking is similar to words like democracy, global, and organic: You hear people use them all the time, but no one seems to understand exactly what they mean.

This kind of etymological opacity lends itself to them being misused, fumbled awkwardly, and abused. Over the long term, such abuse empties it of meaning until we all either throw it around casually in the middle of an overly complex sentence to bolster our own credibility, or avoid the term altogether.

If we can, for the purpose of the here and now, agree that critical thinking means something along the lines of thinking to produce judgment, then we’re already two thirds of the way to making some kind of new meaning ourselves here.

Critical thinking is among the first causes for change (personal and social), but is a pariah in schools –for no other reason than it conditions the mind to suspect the form and function of everything it sees, including your classroom and everything being taught in it.

Of course, critical thinking without knowledge is embarrassingly idle, like a farmer without a field. They need each other—thought and knowledge. They can also disappear into one another as they work. Once we’ve established that—that they’re separate, capable of merging, and need one another—we can get at the marrow and fear of this whole thing.

More than definition and clarification, we need contextualization–to look around the term as we use it and see when and how it’s used, and what kind of reaction it elicits when that happens. Here, there’s a lot to look at: how to teach it, how to assess it, what role it plays in the learning process, how to use it in misleading school mission statements, how to casually drop it in classroom walkthroughs or walkthrough documents (in a way that implies I’m not exactly sure how this lesson should be made better, so I’ll instead encourage you to ‘encourage the kids to think critically,’ or, There is so much abstraction in your class that I have no idea what’s happening but boy there’s probably a lot of critical thinking going on).

Criticalthinking.org says that critical thinking is:

“Critical thinking is that mode of thinking — about any subject, content, or problem — in which the thinker improves the quality of his or her thinking by skillfully analyzing, assessing, and reconstructing it. Critical thinking is self-directed, self-disciplined, self-monitored, and self-corrective thinking. It presupposes assent to rigorous standards of excellence and mindful command of their use. It entails effective communication and problem-solving abilities, as well as a commitment to overcome our native egocentrism and sociocentrism.”

A paper published in 2004 by a professor at Harvard says that definitions for critical thinking are “available in various sources are quite disparate and are often narrowly field dependent,” offering a psychology-based definition as “Critical thinking examines assumptions, discerns hidden values, evaluates evidence, and assesses conclusions.”

In the same paper, Philosopher Richard Paul and educational psychologists Linda Elder define critical thinking as “That mode of thinking – about any subject, content, or problem – in which the thinker improves the quality of his or her thinking by skillfully taking charge of the structures inherent in thinking and imposing intellectual standards upon them.”

In education, critical pedagogy and critical thinking overlap almost entirely. The definitions above, while focus on the thinking, don’t focus much on the criticism. In critical thinking, the thinking is only a strategy to arrive at informed criticism, which is itself is a starting pointing for understanding one’s self and/or the world around you. While in function it can run parallel to the scientific method, science intends to arrive an unbiased, neutral, and zero-human conclusion.

In critical thinking, there is no conclusion; it is constant interaction with changing circumstances and new knowledge that allows for broader vision which allows for new evidence which starts the process over again. Critical thinking has at its core raw emotion and tone. 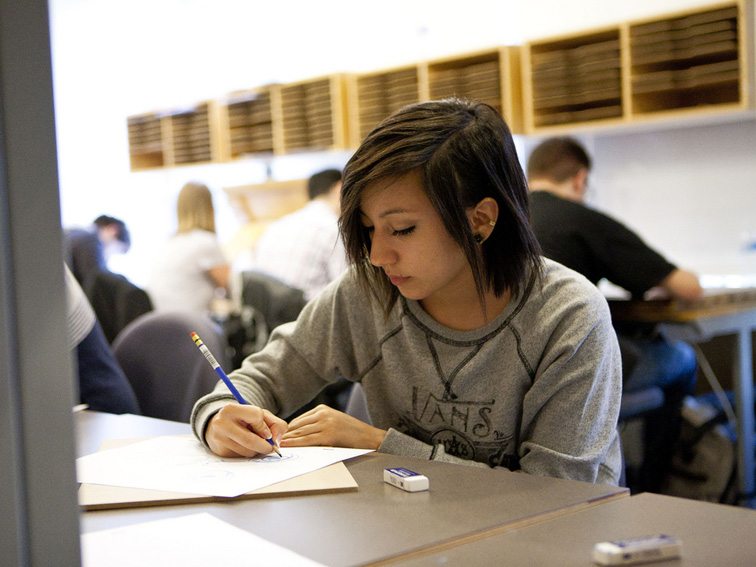 To think critically about something is to claim to first circle its meaning entirely—to walk all the way around it so that you understand it in a way that’s uniquely you. The thinker works with their own thinking tools–schema. Background knowledge. Sense of identity. Meaning Making is a process as unique to that thinker as their own thumb print. There is no template.

After circling the meaning of whatever you’re thinking critically about—a navigation necessarily done with bravado and purpose—the thinker can then analyze the thing. In thinking critically, the thinker has to see its parts, its form, its function, and its context. After this kind of survey and analysis you can come to evaluate it–bring to bear your own distinctive cognition on the thing so that you can point out flaws, underscore bias, emphasize merit—to get inside the mind of the author, designer, creator, or clockmaker and critique his work.

This clockmaker that has made this clock.

This poet that has conjured this poem.

This scientist that has worked for months on this study to prove or disprove this ambitious theory.

This historian that has contextualized this historical movement in a series of documents and artifacts that now deserve contextualization of their own.

To think critically requires you to aggregate knowledge, form some kind of understanding, get inside the mind of the clockmaker, judge their work, and then articulate it all for a specific form (e.g., argumentative essay) and audience (e.g., teacher). Think about what that means.

It’s easy for teachers to see the role of critical thinking in a more macro process. By analyzing and critiquing the work of others—especially experts—students have to temporarily merge minds with them (or else they’re just producing conjecture that sounds smart). By thinking critically, they learn here by imitation—for a moment, running alongside others who, among other functions, act as pacesetters. By combining this kind of angled thought with master workers and their works, we force students to dance with giants—or the holograms of giants.

The tone here is intimidating for developing thinkers—or should be anyway. It’s a tone that is simultaneously intellectual, collaborative, and defiant. It says, “I’ve come to understand this complex thing worthy of study—which probably represents a more significant achievement than anything I’ve ever produced in my life—and then bring judgment upon it. I am both capable of all of this, and willing to do it in a way that itself will be judged.”

This is the kind of courage that takes years to grow.