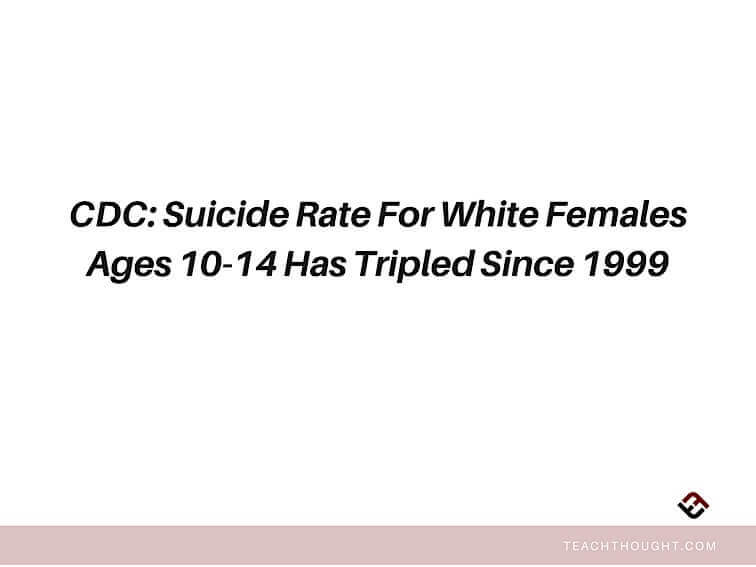 Though it doesn’t get much attention and can be difficult to talk about, suicide is a significant part of any middle or high school teacher’s work.

The Center for Disease Control has a litany of statistics on suicide, and they are, of course, troubling.

The numbers are overwhelming and beg further analysis and deeper study. The trends within the numbers are perhaps the most startling bit. With the suicide rate for non-Hispanic white females ages 10-14 having more than tripled since 1999, it’s hard not to wonder about the impact of social media on youth identity, especially popular social media platforms like instagram that are focused on the aesthetical appeal instead authentic relationships or, ideally, human potential.

Digital citizenship is, of course, a key factor in all of the above.

For a teacher, responding to this data can’t be reduced to a series of tips and strategies, but rather should be the focus of the entire curriculum of study, and the relationships and requisite sense of purpose students of all ages experience in and out of the classroom.

In addition to relationship-building, day-in-day-out observation with and without peers, and specific training to responding to suicide threats in students, one of the most powerful roles a teacher can play in the life of a student is as a kind of anchor point to unify–or at least inform–other support systems.

While parents lead the ‘whole child’ care of students, teachers can work together with families, counselors, community organizations (through Project-Based Learning, for example), and even peers to support students overall sense of well-being. This can be accomplished through relationship-building, mentoring, leadership, the contextualization of academic content, goal-setting, and more.

While bullying, familial stability, poverty, mental health, and countless other factors can impact a child’s decision to harm themselves, researchers see simply having a common language about suicide could help reduce teen suicide, as could common suicidal ideation and suicidal behavior assessments.

In juLY 2017, The Journal of Clinical Psychiatry published a study examining strategies useful for for reducing suicide. Their key takeaway revolved around language, assessment, and formal nomenclature used in medical health treatment.

‘The members of the WG and the pre-meeting survey respondents uniformly endorsed the guiding principles that an optimal nomenclature and classification system for suicide terminology should be clinically relevant, comprehensive, reliable and valid, easily understood and applied, theory-neutral, and adaptable to public health needs. There was also broad agreement that definitions of suicide and suicide related phenomena should be free of value judgments and “culturally normative” (ie, broad enough to apply to a range of belief systems and cultures).’

The overarching clinical points of the study by the JCP include:

2. Recommendations included the following: (1) clear standards should be used to evaluate existing SI/SB assessments, (2) SI and/or SB should serve as the primary endpoint in treatment studies, (3) common data collection elements should be implemented to ensure comparability across studies, and (4) more work must be done on public health gaps, especially those related to stigma and cross-cultural issues.

3. The primary barrier to advancement of SI/SB research and the development of new treatments for SI/SB remains the lack of a universally accepted standardized nomenclature and classification system. Achieving alignment on definitions and classification of suicide-related phenomena is critical to improving the detection and assessment of SI/SB, the design of clinical trials for new treatments, and effective public health interventions.

The Journal of Clinical Psychiatry