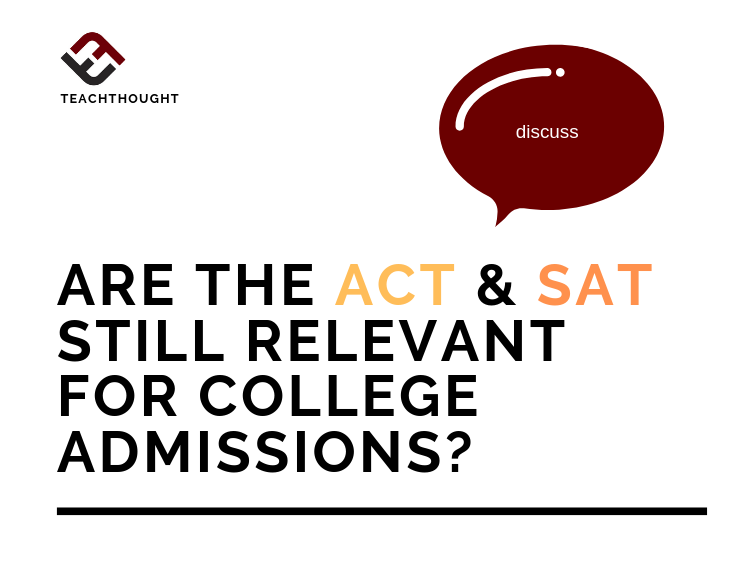 Discuss: Are The ACT & SAT Still Relevant For College Admissions?

Are standardized tests still relevant to clarify the ‘readiness’ of college students?

(A better question might be why are the ACT and SAT still relevant for college admissions?)

In an era where students are characterized as much by their digital citizenship (and digital footprints) as they are letter grades in (relatively speaking) ‘closed’ classrooms, are the results of these tests the best we can do?

When data is everywhere and transparency is both a boon and a curse, are these numbers the ideal form of evidence that a student is going to ‘make it’ in college?

More broadly, in the ‘information age,’ should content knowledge–now more accessible than ever through mobile devices, voice search, etc.–and proof of that content knowledge (in the form of the ACT and SAT) be the primary arbitrator of a student’s ‘access’ to a university?

And what are the effects of such narrow terms for entry? Who does it serve?

And how would we know this approach is or isn’t working?

The Concept Of Standardized Assessment

The concept of standardization comes up a lot around here–mainly because it permeates everything in education, from what’s learned (academic standards and subsequent curriculum) to how that curriculum is learned (learning models) to how the learning is measured (assessment).

What schools and classrooms look and feel like. How teachers begin and end class. The school schedule. Report cards–all of these things, in general, are very, very similar anywhere you go in the Western world of formal, K-12 public education.

Standardization certainly has its benefits–it is often argued that all professional industries need them. To be philosophical, standardization isn’t inherently good or bad but rather does or does not help education reach its goals. It either works or it doesn’t. (It’s not about the quality of the idea but the effect of the idea.)

I’ve been thinking a lot about testing from a different perspective recently–as a parent. My daughter is considering college and her options and how it may or may not suit the next stage of her life. And while helping her understand the ‘system,’ I can’t understand how on earth testing has become such a monster in education. Test scores, grades, credit hours, and ‘program requirements’ drive 75% of the conversation I hear, and I just don’t understand it–and neither does The Atlantic, apparently.

Like the idea of standardization itself, results from standardized assessments are neither ‘good’ nor ‘bad.’ They have an effect on a system and that effect either serves or fails to serve the goal of that system. In the case of formal education, these assessments merely provide data (which data it actually provides and how well it does so and what is done with that data are separate issues, entirely). Information. We either do the right or wrong thing with that data.

But the effect is different; it rarely works so clinically. For too many students, the ACT and SAT appear to be significant barriers to college. They affect students so strongly that they bend the experience and purpose and effect of college altogether.

And these tests are so strongly entrenched in our culture that we fail to scrutinize them appropriately. Rather than question if they’re serving us and how, we instead admonish schools and student and teachers to simply ‘be ready for the test’ as if it’s an unavoidable storm that cannot be avoided. It just is. In this way, colleges and its mechanisms and costs–and thus their social impact–seem beyond the reach of our critical thinking and human affection.

And nothing should ever be beyond the reach of our critical thinking and human affection.

A recent post on KQED discussed a little of the troubling background of college admissions testing.

“Of the roughly three million seniors who graduated from American high schools in 2016, more than two million took the ACT and more than 1.6 million took the SAT, some took both, that’s because the majority of four-year colleges including most state schools require at least one of these tests. But that’s changing. About one-third of four-year colleges and universities in America now have some type of test-optional admissions policy. So for most of these schools, you can submit test scores but you don’t have to…

…to understand why any school requires these tests, you have to study a little history. The SAT the older of the two grew out of an Army IQ exam from World War I, something called the Army Alpha test. It caught the attention of Harvard’s president who thought the test could help identify smart, promising students who didn’t fit the mold of the typical boarding school applicant. He wanted to have more geographic diversity, most other schools soon followed suit. In other words, the test was originally intended as a way to diversify applicant pools. The exact opposite of what critics say it does today. Kinda ironic, huh. Fast forward to today, the private test prep market is a two billion dollar industry…”

It’s a numbers game, of course. Scale matters and standardization thrives in contexts like these. The strongest argument I’ve heard for requiring the ACT and SAT for college admission is that it is actually a decent predictor of success at the college level.

But that misses the point–the question isn’t whether or not test scores and GPA do well at predicting ‘college readiness.’ The question should be, “How can education, as a system, help students change and shape the world into something that works for everyone?”

This suggests that we ask how many students are turned off and away (the opposite of inspiration) from college altogether because they lack the ‘GPA’ and ‘test scores’ that are meant to, at best, merely predict their ability but instead appear to decree that ability.

When testing and grades and credit hours are not just terms of college but the primary terms of college, how does that begin to characterize college over time? How does it affect which courses students are willing to ‘try’? How they study (and thus what they learn)? Which facts and observations and beliefs they accept and which they question–and what they come to believe about themselves as a result?

In this context, what effect does college end up having on the student’s life? Usually, we think of whether or not it led them to ‘a job.’ And that’s fine–let’s explore and value and appreciate that.

But by making test scores and letter grades the rules and terms for college entrance–to even get in–how does that affect not just the ‘experience’ for students, but how might it turn away generations of students who, through those terms, never see themselves as ‘the college type’?

Like standardization and standardized assessments, this kind of critical inquiry is neither good nor bad but rather has an effect–and in this case, it actually may benefit students to think long and hard about whether or not college is ‘for them.’ Its exorbitant cost and narrow terms and intense pressure and high dropout rates–these are ‘data’ students should consider about college the same way colleges consider ‘data’ about potential students.

That’s heavy thinking for a student, I know. And maybe overly-idealistic. And certainly is missing the point of why we started talking about college admissions. So then, back to the point that I’ve barely explored: Are the ACT and SAT still relevant in an information and social age?

If so, should they continue to play the same role they have in the past?

More broadly, what is the best way to help students and colleges understand one another without dissuading the students and distracting them from why they’re considering ‘going to college’ to begin with?

And more abstractly, what is the effect of standardizing that kind of decision?

Let us know in the comments below what your take is–and if you have students that can provide their take (in a way that protects their privacy), that’d certainly make it a more authentic and useful discussion.