How Much Longer Will ‘School’ Be Relevant? 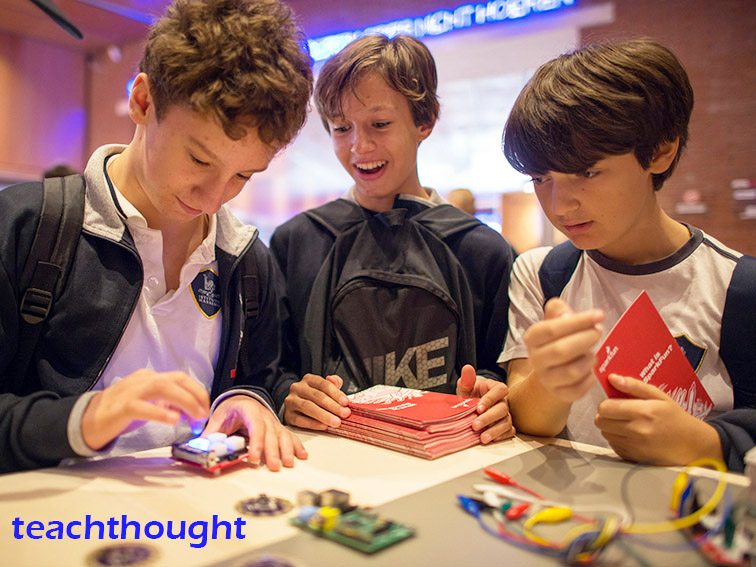 How Much Longer Will ‘School’ Be Relevant?

As millenials transition from reddit to the workforce, there is a growing civic discontent over the economic chemistry of our nation.

While America has long a blue-collar nation established through notions of rugged individualism and close-knit communities, issues of industrial gravitas were born during the industrial revolution in the mid-1800s, and metamorphosized into wider-reaching corporate influence and greed which arrived in the public consciousness in the 1980s and 1990s, primarily through film (e.g., Wall Street featuring Charlie Sheen and Michael Douglass).

In this system, the vast majority of the power—political, influence, and financial—is controlled by a select few, where a symbolic ‘1%’ have control, and others scramble for crumbs. While straight political discussions are mercifully beyond our interest, the issue can’t be ignored entirely, primarily because the systems of education—i.e., formal learning institutions–have inherited a parallel infrastructure stricken with a parallel imbalance–one that promotes a narrow vision of academic success that works well for the ‘1%’ while clumsy and woefully inadequate for the rest.

As consumers, Americans demand high levels of quality. Cell phone carriers strive for ‘zero dropped calls,’ automotive manufacturers offer not 36,000 mile warranties but those that last 100,000 miles, and online purchasing is increasingly social, allowing for unprecedented roasting and yelping of any app, service, or product that doesn’t cater to every conceivable consumer whim.

But strangely, we don’t demand the same level of excellence in our formal learning systems. Movies like Waiting for Superman paint the average American family—very much “consumers” of our multi-billion dollar education system—as helpless. Waiting.

While not quite passive, families stir and rant and flail, all the while hoping for district-sponsored lotteries to decide the fate of their children. In a nation full of grit and can-do spirit, this is curious. Perhaps some of the reason is perception. In a society that has trouble evaluating the quality of a learning experience, it might make sense why more people aren’t upset. If students can read, are getting ‘good grades,’ seem happy enough, and get into college, then K-12 has done its job, yes?

Who can complain when there is only accountability for test results, and not the quality of learning experiences–precisely because the layperson cannot begin to evaluate the quality of those learning experiences beyond those test-based measures? Amazon.com has 800 word reviews on the exercise machines, but the best we can do to evaluate the quality of learning is to “hear” school X is “good,” or know a teacher that’s “good” at school Y, crude measures we would never accept in our food, electronics, or sports wear.

The Credibility of Academia

Recent ed/policy movement has focused on standards-based reform, which has increased with the recent adoption of a national set of academic standards—the Common Core–at all but a small handful of the nation’s 50 states.

At the district and school levels, schools utilize various incarnations of “professional learning communities” and “data teams” to promote collaboration for teachers in pursuit of the ultimate goal: 100% “proficiency” of each of these highly academic standards, as measured on a state-administered test dominated by multiple choice and short-response questions. An example of these standards includes the following English-Language Arts High School standard for literature:

“Analyze how an author’s choices concerning how to structure specific parts of a text (e.g., the choice of where to begin or end a story, the choice to provide a comedic or tragic resolution) contribute to its overall structure and meaning as well as its aesthetic impact.”

While it is difficult to argue the importance of close reading of a variety of digital and non-digital text, there is tremendous challenge in establishing whether or not a student “understands” how to do this—if they have “mastered” this standard.

To measure mastery, teachers give assessments—informal and formal, quizzes and tests—to provide a starting point. Then, after “research-based” instructional strategies are implemented, standard-mastery is measured again, and data is compiled, analyzed in said “data teams,” and instruction revised again accordingly. On paper, this all makes sense. If a track-and-field athlete can be considered as an analogy, you see how far the athlete can jump, train him to jump further, then measure how much further he’s gone.  The challenge here is that jumping distance is black and white, while notions of “understanding” are not.

And the highly academic nature of reading and writing standards—while full of “rigor”–only serve to further detach the learning from the reality of the learner. If the ultimate measure of understanding is the ability of a learner to “transfer” understanding from a highly scaffolded situation to one without scaffolding—and hopefully from the classroom to the “real world”—highly artificial and academic standards, instruction, and assessment “data” only serve to further obscure the learning process from those who matter most: the learners and their families.

In creating this highly academic world, we’ve moved the content, the instruction, and the notions of success beyond the grasp of learners, into institutionally-centered constructs that ultimately erode learner and social capacity.

Paraphrasing Ken Robinson, schools seem setup to make “little college professors,” instead of vibrant, creative, self-aware members of a healthy and interdependent community. The big idea behind PLC-driven reform of standards and outcomes-base instruction is to make more learners able to achieve “success” within this dated model of academic performance. But what if we revised how we measured proficiency?

Or widened the scope of what we were measuring?

Or brought in communities to make decisions on curriculum, assessment, and instruction—and not via a school-sponsored PTA meeting, but on equal ground, where the school’s role in the community—and the community’s role in the school—have been carefully reconsidered. (Families won’t engage? Don’t know how? Well, now we know where to start.)

Or, in perhaps the ultimate current model for a vision of learning, personalized learning for each student for their unique knowledge demands.

With modern digital and social media, and potentially innovative learning cycles available through project and problem-based learning, there are tools available to discontinue hurtful traditions that are primarily academic. The key will be to awaken that 99%–the families and communities–to the very serious issues at hand, and help increase our collective cultural capacity to spot, produce, and revise authentic learning forms for learners who have the universe at their fingertips.

It seems to me, then, that we have three choices:

Towards what? Well, that’s the exciting part. Once you’re willing to turn away from academia, a thread comes loose in the tapestry of scholastics as we know it, and we’ll be forced to sew something altogether new and different. Created in the 21st century, this would necessarily be created with 21st century thinking in modern contexts.

This will require a humbling modesty on the part of institutions to once and for all admit that they cannot possibly educate children alone–and to stop pointing at sporadic success as proof that ‘school works.’ While a decent number of students can be caused to be “proficient,” this evaluation–and thus the product–is almost entirely academic.  And thus imbalanced in a decidedly non-academic world.

Rather than improve ‘school,’ maybe we should think of what students need to know to grow healthy communities, and work backwards from there. To do that, we have to be willing to leave ‘school,’ as we know it, behind.

The Benefits Of Blended Learning

Ep. 31 Let's Teach Students To Ask More And Better Questions With The QFT

"What’s wrong with education cannot be fixed with technology. No amount of technology will make a dent. The problems are...

Why do we create goals and mission statements among the planets and stars, then insist on data and strategies grounded...

The term “academic” is ambiguous. How about thinking of it as “mastering a body of knowledge that provides perspective on all the issues of life”? What we want from such learning, however it is labeled, is an understanding of what is currently invisible to us from our present experience. It’s in the “academic” that we understand the context of present experience–from history, anthropology, psychology, economics, and on and on. If we do not learn these things and bring them to bear on the current project, we are easily captured by false and limited assumptions based only on what we can… Read more »

The existing educational system is alienating the student from what he needs to know to prepare him for the real life outside the classroom. The school seems just like a factory producing robots for the workforce.

Jillian, good point. I think the current system is also based on the preservation of the status quo. It is easy to see why when our laws and polices were written, and are reinforced, by those who have found great success in that system.

The issue is more complex, and perhaps driven by out particularly American need to “quantify” all things at all costs….to have winners and losers; to rank everyone and everything (for example we grade schools against state or national “averages”….well when you do that SOMEONE out of every 100 has to be below average and thus gains the distinction of being seen as a failure…). The issue is also simple- have standards that are understandable by the students themselves, their parents and the teachers. The one given in the article as an example is a PERFECT example of a standard written… Read more »

To whoever wrote this article: please, learn to write properly.

This is unreadable. I am very interested in the subject and trying hard to understand this article, but cannot even get through a whole paragraph. It may be the idiosyncratic syntax and quite inventive use of some words that more commonly mean other things.

The topic is really worth considering for both parents and especially for teachers to provide students with updated and innovative learning methods making them learn more and gain quality knowledge rather than only getting good marks.

This is only happening because our education system is getting extremely outdated. Pity to see education falling to such level.

Times have changed and so the educational system should. Better ways have been proposed, but not one was implemented.

There are so many different things that need to be changed about the educational system in the United States. You have a valid argument.

This is far more complicated then it seems at first. Less people get real kind of education where you actually learn something.

Sadly, just like the article states, the education has become a matter of consumerism. I don’t have to say how awful that it. Just read the article, it’s amazing.

The title of this article, “How Much Longer Will ‘School’ Be Relevant,” gave me pause when I read it. Irrelevance is a very subjective state in which any one thing might exist. Relevance some may say is in the eye of the beholder. As an educator, the idea of school for me is a multi-faceted entity. This is even more the case when we consider the effects of school over the lifetime of a student. Having been a student in several regular public school systems and state-run universities, as well as a current teacher in a public school, I feel… Read more »