Humbug! Why I Hate The Holidays In Schools 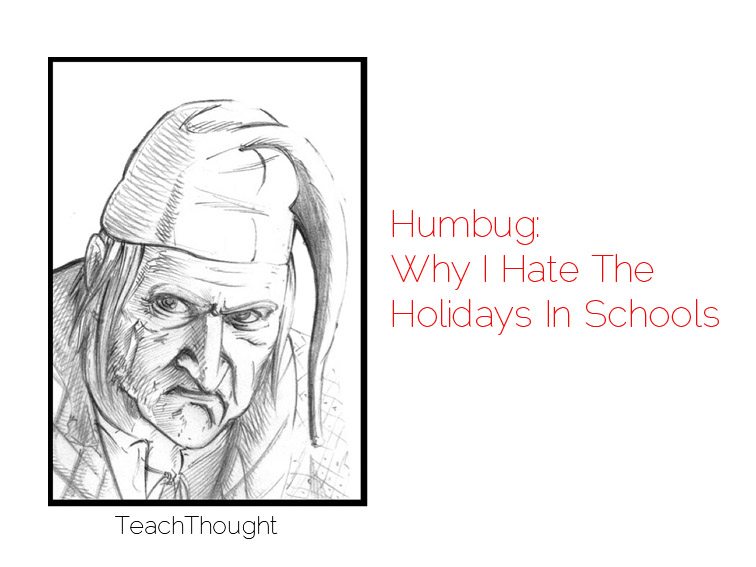 Bah, Humbug: Why I Hate the Holidays In Schools

From the end of Thanksgiving break until the beginning of the holidays, I grit my teeth, steel my nerves and keep my head down. I don’t believe much learning happens, and I know conflicts and clashes escalate quickly. I’m overscheduled, short on time, and feel guilty when I celebrate, and guilty when I don’t. Holiday spirit!

Bah humbug. Why celebrate when there are things to complain about?

As we all know, this month-long period features more food, especially sweets than any other time of the year. Even if we ban students from eating in class, they sneak treats in, they carry them in their backpacks, and they hand them out to friends when they meet up—often in the room. I am not a maid or an exterminator, but if I don’t clean up after them, I will get the creepy crawlies.

And they’re the gift that keeps giving all year long.

In the old days, I received a lot of homemade goods: toffee, fudge and cookies. I enjoyed feasting on these items throughout the season.  Now, I get Starbuck’s gift cards—lots of them.  Apparently, teachers drink coffee. I don’t; I drink Diet Coke exclusively, and the kids know that, because they see me doing so every day.

How about a 12 month membership to a Jelly of the Month club?

During the festive season, the students tend to give each other little gifts. While I appreciate their generosity and thoughtfulness, the high-pitched exclamation of surprise and appreciation truly hurts my ears and brain. It’s always in the hallway outside of lockers—in other words, a sound tunnel—so the painful screech travels above and among bodies, winding into classrooms where a now distracted class breaks into laughter and chitchat.

Seriously. A literal tunnel of sound.

4. Grading Is More Of A Distraction Than Ever

As any break approaches, we feel the need to wrap up a unit or create a “culminating assessment”. The kids are freaked out, and we’re stressed out. The buzz in the classroom is both palpable and unproductive.

Instead of working or listening, the students are chatting about tests they have in language or math and the project due for science and social science–which is neither conducive to learning nor festive. At least they could buzz about family or gift giving or the fact that the little lights aren’t twinkling.

The last day before the break begins is useless. Many of the students’ brains are absent, and many others are missing both body and brain. My favorite line from a parent: “I got a great deal on the plane tickets if we left on Wednesday evening, so he’ll miss the last two days.”

When I’m forced to participate with colleagues, I always get the person who doesn’t make a list and doesn’t “want” anything. We all know the martyr is lying, but I’m not much more creative than a pack of Lifesavers. When students force me to join—like my advisory group—I only want one gift a day: a can of diet coke.

Image attribution flickr user allencisneros; Humbug! Why I Hate The Holidays In Schools

On Windows Mobile? Consider #AppSocial To Socialize How You Find Apps

Every Single Satellite Orbiting The Earth