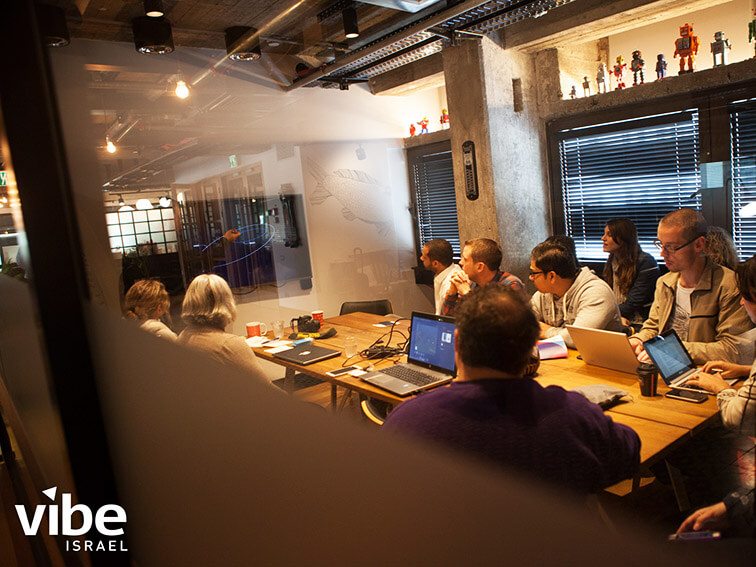 The Time I Went To Israel In Search Of Innovation

In the middle of the desert in southern Israel, it’s the cold that you first notice. It’s a different kind of cold–the kind that is always moving around you in unexpected ways.

Here at the Ramon Crater, I stood at the precipice of what eternity would look like if it were made of crushed sandstone. Uncomfortable air swirled around my neck and face, howling in swells that rolled down the face of the cliff, across the barren landscape below, and then lifting up in great heaves towards the sky, only to fall again, washing over me in tiny eddies of biting cold.

This is a process that’s been repeated here for thousands of years; at that moment, I just happened to be standing in the middle of it all, a stranger brought 6000 miles from my homeland to a strange place with alien terrain, confusing human legacy, and lighted cultural diversity to see it firsthand for myself. What I found was an awkward kind of symmetry between the old and the new that, while unbalanced, created a dichotomy that underscores everything you see. 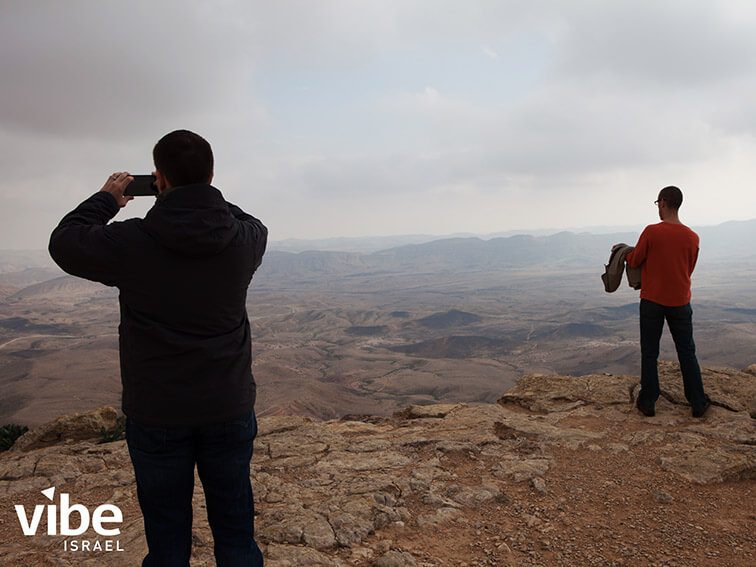 The Maktesh Is A Metaphor

The Ramon Crater is the geological and geographic centerpiece of Mitzpe Ramon, a small town in the Negev Desert. The crater was formed with the collapse of what had to be an other-worldly massive mountain. The collapse left behind a hole 38 km wide and 6 km wide, and 450 meters deep.

It wasn’t formed by the impact of a meteor or the eruption of a volcano, but rather–like the Grand Canyon–by erosion. Which means it’s not really a crater at all. Nor is it a canyon. It’s a maktesh–a geological formation entirely unique to Israel.

In a conversation with BBC News in 2013, Itay Naveh, manager of the Mitzpe Ramon Visitors Centre, explained, “Maktesh Ramon was created by the erosion of a mountain that rose above sea level. Millions of years ago, the limestone top of the mountain broke and the inside of it was drained out by the river. So, it’s more like a giant funnel, not really a canyon.”

So it’s actually Maktesh Ramon. This is the kind of playful duplicity that persists in Israel the same way that bicycles and graffiti and technology do. Nothing is what it seems.

There are rules, but there aren’t.

There are facts, but they’re debatable.

There is centralization of government and infrastructure, but it all plays out in the hands of people in local positions–people that shrug their shoulders at policy and say, “Maybe we’ll follow the policy; maybe we won’t.”

I was perched on the edge of this cliff jutting out over the desert, and Israel started to reveal itself. A cold desert. Flexible policy. Modern history. Canyons that aren’t. A place where peaceful religions crash together.

Somewhere within this duplicity is a mindset that yields innovation.

The Sources Of Innovation In Israel

8,345,000 people live in Israel. There were only 806,000 when the Jewish state was established in 1948. For a country the size of New Jersey, that kind of growth and complexity has necessitated a mindset for innovation. In Israel, episodic advances are insufficient; a startup here or an invention there can’t absorb the modern complexity of a land already trembling with history.

Here, Jerusalem and timeless maktesh and synagogues and mosques compete with restaurants and high-rise hotels and tech startups to be the face of a nascent nation still figuring out who it is–and doing so in a global and connected context. Innovation can’t be here and there; it has to be built into the fabric of thinking and behavior. In spite of their challenges, this fragmentation–and its subsequent necessity–seem to actually cause innovation by demanding it.

And in Tel Aviv, that’s certainly the case. Citizens here attribute this mindset to the IDF. In Israel, everyone is required to serve in the Israeli Defense Force. Well, not everyone. There are exemptions of course, and some suggest that the days of mandatory service–as it is–may be numbered. But the average citizen in modern-day Israel has served in the IDF, seemingly providing a sense of confidence, leadership, and shared experience.

There is technology–accelerators and startups abound. Israel has the highest number of startups in the world behind the United States, and the highest per capita. 75% of the water is recycled. Solar panels are everywhere you look. The cell phone coverage is better in the middle of the desert than it is in some US cities.

Israel also has the most PhDs per capita in the world. There is a forced mixing of gender and faith and character and talent and future ambition that seems to result in a sense of accomplishment, patriotism, and common purpose often missing in the West. For its citizens, the IDF models ambition and innovation–through technology certainly, but also in how the military itself is perceived in everyday life. For Israelis, the military is less frightening than it is a collective rite of passage.

This kind of common experience produces chutzpah–an inherent sense of urgency and borderline arrogance to make things happen and to do so as a matter of national pride.

But maybe more importantly, everywhere in Israel there is a palpable sense of place. Crushing historical legacy. Stunning geography. An accepted mixing of religion and state. These characteristics aren’t unique to Israel, but these factors all competing for relevancy in a tiny country only a century old–a teenager in nation years–create a necessity for innovation if Israel is to survive as it is, and thrive in global settings.

Like any nation, Israel will face challenges as it grows–challenges that will require innovative thinking and a can-do spirit. To an outsider like me, it seems that Israel isn’t afraid of controversy. Contradiction is a matter of geology and is written into religious code and practice. These circumstances produce a kind of national mindset to invent and disrupt. Compete and design. Think and rethink–and not for commercial gain as much as a thirst or instinct.

In this arid Mediterranean country, you see what you want. At this point in its life, for all of the headlines you see, it’s pleasingly ambiguous. You can create whatever kind of narrative you’d like because it’s all actually here somewhere. Nothing is made up in Israel. To reduce the cognitive dissonance, you’ll likely settle on a single perspective. Israel is this. Their innovation is here and here. This is what I choose to see. This is my truth. This is wrong and this is right and this is old and this is new; this is worth keeping, and this needs modernizing.

Is it a crater, a canyon, a maktesh, or a collapsed mountain?

And when you start to wrestle with yourself to figure it out, you’re coming closer to the genius of this place: For all of its spectacle, the real innovation of this country is in its identity. It’s a kind of illusion that changes depending on how you hold it in your hand. And it never apologizes for what you can’t see because it’s organic and whole–that’s what happens when innovation isn’t conjured, but is a state of mind.

If you visit, your experience will be necessarily different. That’s how mirrors work. This is Israel, a nation of perpetual juxtaposition. While you squint, all around you the rocky hills and timeless dirt footpaths arc with blue lightning and electricity, humming with life.

This is what I found when I came to Israel.

Image attribution by the author and Amit Shemesh