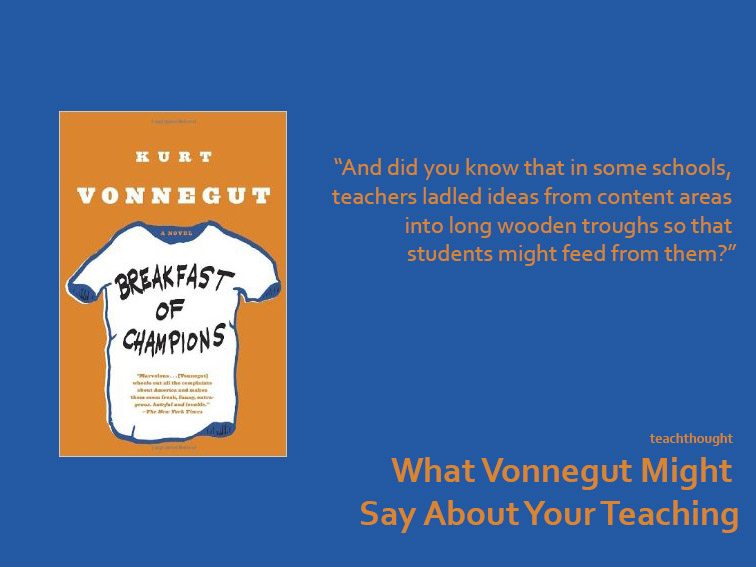 by Terry Heick because who else would write something like this?

I’m in the middle of “Breakfast of Champions” by Kurt Vonnegut, and just finished reading “Trout Fishing in America” by Richard Brautigan, and I stumbled on a magic secret about teaching I want to share with you. It’s also about physical fitness.

There are a lot of indicators of fitness; there are many ways that being fit can improve your life. Most people understand this, even if they don’t do anything about it.

They run for so many miles, and check their Fitbits to see how well it all went. Some download apps that help them pretend they’re running from zombies because they need that kind of motivation and that’s what works for them and can you imagine an ibex needing that kind of technology? They call this jogging.

They scamper up and down tall, angled earth covered in lilac and clover and soil too sloped to grow anything but lilacs and clover. They call this mountain climbing.

They get together and swing their arms around in large elliptical patterns that make everyone say ooh and ahh, then they agree to meet every Tuesday night at rec center and do it again. They call this martial arts.

They lift weights that are heavy–metal bars with plates on the end that are filled with collapsed stars and carbon and just enough dark matter to make them struggle, and watch their muscles swell like water balloons that are shaped like arms and legs. They call this lifting weights.

They get in cars made in other countries (that were shipped there on boats made in other countries still), and drive down paved pathways that connect (in right angles) with other paved pathways (they call these roads) until their GPS tells them they’ve arrived, then they get out, carry their rolled up mats into hot studios and bend their bodies into shapes named after serpents and chairs and sweat out all their crazy in the same room so they can leave it there and go back home without it. They call this yoga.

There are lots of ways to become physically fit. But being fit is only valuable insofar as it enables other things. If you’re fit you might live longer. Or feel better. Or spend less in health care. Or your back might hurt less. Or you might fit into clothes that make you feel good. Or play team sports. Or with your children when the WiFi goes out.

Or lift carts of harvest in the fields when the donkey needs a smoke break.

The yoga studio or muay Thai facility or gym help you live. You go to the gym and lift weights so you have more energy, or you look and feel attractive, or you might live long enough to see your great grandchildren.

But did you know that some people go into those gyms just to make their muscles big–like giant flesh golems? And that’s it. They’re not taking that strength to lift cabbage, or push linebackers, or be a barrel-chested lumberjacks. They want puffy pectoral muscles that give the illusion of athletic potential, but they just use them in order to get better at lifting more collapsed stars.

They lift weights to get better at lifting weights.

And did you know that in some schools, teachers ladle ideas from content areas into long wooden troughs so that students might feed from them? The feed is Common Core, and all the students eat the same thing because it’s packed full of nutrients and fiber and is gluten free and free range. And when the students feed, they comment to one another about the taste and say things like “This tastes good,” or “What is this? I can’t place the flavor,” but they keep chewing because one day they want to be big and strong like the teachers, or their parents, or the donkeys when they’re actually working.

These schools have been gamified out the wazoo, so students learn to seek the points and the letters and badges instead of questions and critical literacy and wisdom because there are no points or badges for them and besides, games are fun. Students become trained to “get good at school.” To stop resisting. We push our teacher fingers against our teacher lips and say shhhhhh and so they do.

They master academic content of dubious value in order to fulfill the form of a student, just as those flesh golems go to the gym just to get bigger muscles to lift more weight, those muscles never leaving the gym, and those big, beautiful minds pressing against the windows of the classrooms, dying to know something about the world on the other side.

And that’s how we ran schools in the early 21st century.