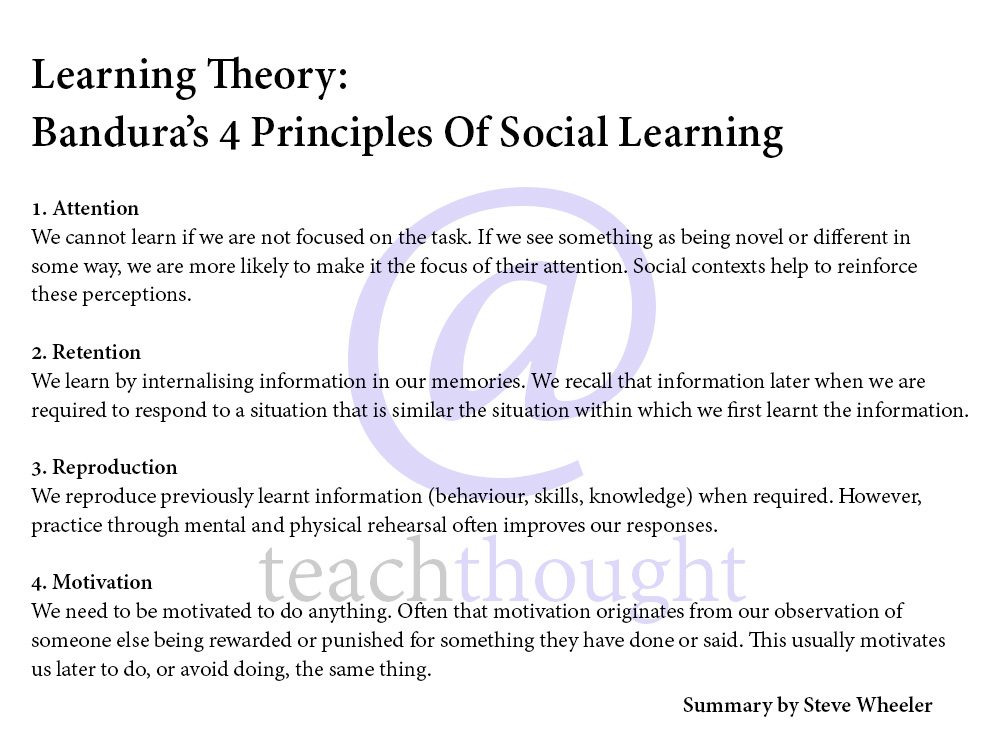 This is the third in my blog series on major learning theories. My plan is to work through the alphabet of psychologists and provide a brief overview of their theories, and how each can be applied in education. Last time, we examined the work of Chris Argyris on double-loop learning. Today, we explore the work of Albert Bandura on social learning theory.

It’s been said that Albert Bandura’s theory of social learning spans the gap between behaviourism and cognitivism. Social learning theory incorporates the idea of behaviour reinforcement from the former, and cognitive processes such as attention, motivation and memory from the latter. In fact, Social Learning theory is essentially – as the name suggests – an explanation of how we learn when we are in social contexts.

It was Albert Bandura’s intention to explain how children learn in social environments by observing and then imitating the behaviour of others. In essence, be believed that learning could not be fully explained simply through reinforcement, but that the presence of others was also an influence. He noticed that the consequences of an observed behaviour often determined whether or not children adopted the behaviour themselves.

Through a series of experiments, he watched children as they observed adults attacking Bobo Dolls. When hit, the dolls fell over and then bounced back up again. Then children were then let loose, and imitated the aggressive behaviour of the adults. However, when they observed adults acting aggressively and then being punished, Bandura noted that the children were less willing to imitate the aggressive behaviour themselves.

From his research Bandura formulated four principles of social learning. These were:

1. Attention. We cannot learn if we are not focused on the task. If we see something as being novel or different in some way, we are more likely to make it the focus of their attention. Social contexts help to reinforce these perceptions.
2. Retention. We learn by internalising information in our memories. We recall that information later when we are required to respond to a situation that is similar the situation within which we first learnt the information.
3. Reproduction. We reproduce previously learnt information (behaviour, skills, knowledge) when required. However, practice through mental and physical rehearsal often improves our responses.
4. Motivation. We need to be motivated to do anything. Often that motivation originates from our observation of someone else being rewarded or punished for something they have done or said. This usually motivates us later to do, or avoid doing, the same thing.

How it can be applied to education

Novel and unique contexts often capture students’ attention, and can stand out in the memory. Students are more motivated to pay attention if they see others around them also paying attention. Another less obvious application of this theory is to encourage students to develop their individual self-efficacy through confidence building and constructive feedback, a concept that is rooted in social learning theory.