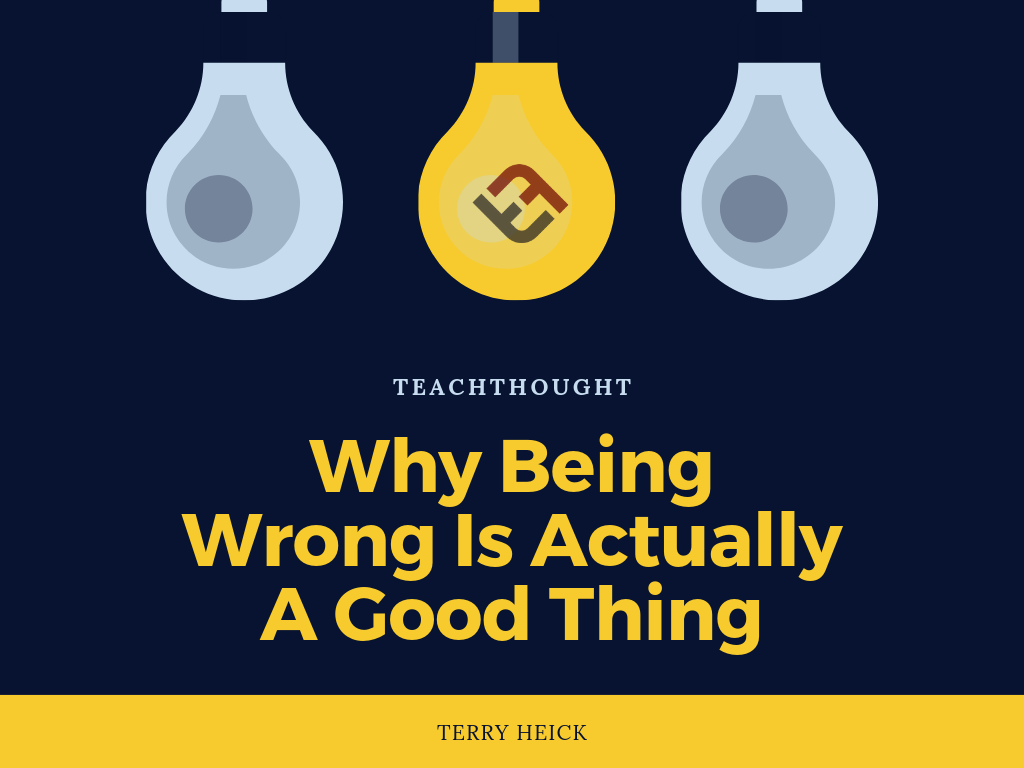 Being Wrong Is Actually A Good Thing

Being wrong is only ‘bad’ if the consequences of that ‘wrong’ outweigh the benefits (and potential future benefits) of becoming right.

David Deutsch wrote about this idea over on Nautilus a few years ago, but I saw it for the first time recently. Part of his take revolves around political ideas, but focus on the bits about ‘right’ and ‘wrong.’

“It’s all about error. We used to think that there was a way to organize ourselves that would minimize errors. (Philosopher Karl) Popper’s answer is: We can hope to detect and eliminate error if we set up traditions of criticism—substantive criticism, directed at the content of ideas, not their sources, and directed at whether they solve the problems that they purport to solve. Here is another apparent paradox, for a tradition is a set of ideas that stay the same, while criticism is an attempt to change ideas. But there is no contradiction.

Our systems of checks and balances are steeped in traditions—such as freedom of speech and of the press, elections, and parliamentary procedures, the values behind concepts of contract and of tort—that survive not because they are deferred to but precisely because they are not: They themselves are continually criticized, and either survive criticism (which allows them to be adopted without deference) or are improved (for example, when the franchise is extended, or slavery abolished). Democracy, in this conception, is not a system for enforcing obedience to the authority of the majority. In the bigger picture, it is a mechanism for promoting the creation of consent, by creating objectively better ideas, by eliminating errors from existing ones.

“Our whole problem,” said the physicist John Wheeler, “is to make the mistakes as fast as possible.” This liberating thought is more obviously true in theoretical physics than in situations where mistakes hurt. A mistake in a military operation, or a surgical operation, can kill. But that only means that whenever possible we should make the mistakes in theory, or in the laboratory; we should “let our theories die in our place,” as Popper put it.”

And in that last bit is the good stuff: ‘Wrong’ is a corrective force. Used well, it’s a kind of feedback loop.

It’s All About The Feedback Loop

Think of the ‘You’re getting warmer/looking for things with your eyes closed while guided by someone else’ game. If you’re turning away from what you’re looking for, the feedback loop (in the form of the temperature metaphor) starts correcting you.

Here is the sequence.

3. Your brain translates the metaphor (this is a hugely abstract process that is a skill unique to the brain of homosapiens).

4. Having translated ‘colder’ as ‘wrong,’ your brain tells your hands and feet to respond by doing the opposite of whatever they were doing. How urgently it does so depends on the tone and voice inflection of the person coaching your movements, which is another translation your brain has to process.

In this sequence, being ‘wrong’ is part of the fun. If you walked right to the object, it’d seem like you were cheating. It’d also cut the game short. In the classroom, of course, being wrong has been stigmatized and we have many words for it:

These all lead to the destination of Wrong, Failure. At best, we recommend students learn through failure.

Fail often enough, and you’re no longer Proficient but a Novice and Interventions must be planned for you (this is the same word we use when families confront some suffering from life-threatening drug or alcohol addiction). This is an idea Laurenc Prusak at NASA explained:

“…if you pay a substantial price for being wrong, you are rarely going to risk doing anything new and different because novel ideas and practices have a good chance of failing, at least at first. So you will stick with the tried and true, avoid mistakes, and learn very little. I think this condition is still endemic in most organizations, whatever they say about learning and encouraging innovative thinking. It is one of the strongest constraints I know of to innovation, as well as to learning anything at all from inevitable mistakes— one of the most powerful teachers there is.”

Prusak goes on to mention ‘wrongology’ and–well, isn’t that what we’re all doing? Becoming right by being wrong?

‘Becoming Right’ As A Process

Striving for accuracy, in our hunches regarding the stock market, theories about increasing yield on a farm, decisions made about the engineering of a rocket, adherence to standards of complex medical procedures, or any other ‘real world’ circumstance, is a ‘good.’ It has as an underlying assumption the possibility of being wrong—we are ‘striving for’ the accuracy, not simply ‘being accurate.’

So much of this is a matter of language and semantics, but there is lesson here for educators. This sounds like a ‘growth mindset’ admonishment, this is first about how the process of becoming wrong—the sweeping of the arms out in front of you as you search—helps you become right.

Put another way, the feedback loop here (of becoming) is far more important than the destination (of being); the latter is finished, fixed, and ready for measuring while the former is ongoing, fluid, and informative.

In fact, the idea of being wrong is ridiculous and only accurate if one stops striving to become right. Consider the quote above on the idea of a ‘laboratory.’

A mistake in a military operation, or a surgical operation, can kill. But that only means that whenever possible we should make the mistakes in theory, or in the laboratory; we should “let our theories die in our place,” as Popper put it.”

And classrooms are nothing if not learning laboratories.

So how can we design learning so that, rather than emphasize errors, the feedback loops actually grow understanding?