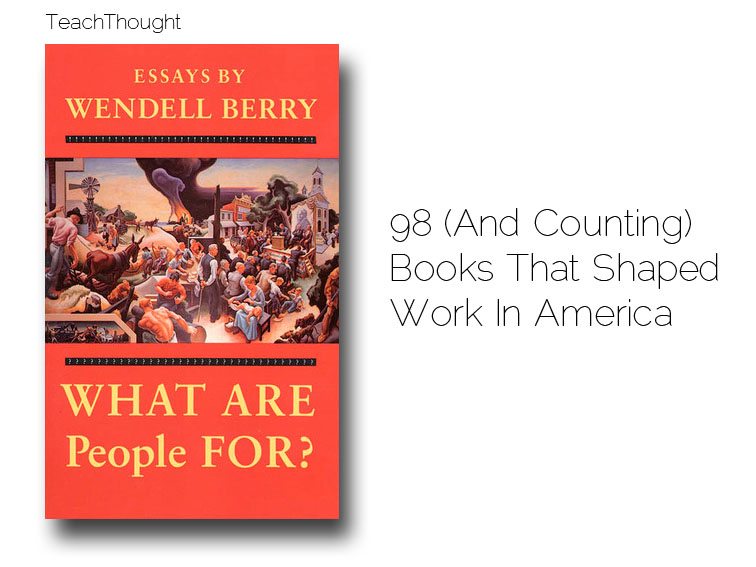 98 Books That Shaped Work In America

I love a challenge, and I love my sister. And, not uncommonly, nothing stirs my competitive spirit quite like sibling rivalry. So for the past year or so, I’ve been in an ongoing competition with my sister Carolyn focused on a passion we share – reading books.

You see, in June 2012, the Library of Congress, through its Center for the Book, issued a list of “Books that Shaped America.”  As soon as I learned about it, I tallied up the number I had read and called Carolyn to compare.

And so a challenge was born. We’re now each working our way through the list. Next up for me: Invisible Man, while Carolyn is about to start A Tree Grows in Brooklyn. I thought I had her beat, because I know she’d never finish The Call of The Wild (I did). But she claims she’s in the lead (darn you, Joy of Cooking!).

Given my interest in labor history (and my job at the U.S. Department of Labor), it didn’t surprise me that many of the books on the list address labor issues (for example: How the Other Half Lives and The Jungle). But the diversity of books with “work” as a central theme really impressed upon me the role fiction, nonfiction, plays and poetry have shaped our view of work, workplaces and workers in America.

And so another challenge was born. Necessity may be the mother of invention, but in this case, sibling rivalry helped.

The U.S. Department of Labor, in partnership with the Center for the Book in the Library of Congress, created “Books that Shaped Work in America.”

For an initial list, we asked members of the Labor Department family and others for their suggestions. They came up with 97 books, ranging from Richard Scarry’s Busy, Busy Town (suggested by U.S. Labor Secretary Thomas Perez) to a book that was a movie first: On the Waterfront (suggested by Fox Business TV anchor Liz Claman). You can read their book recommendations–and those of others–by visiting dol.gov/books.

But more importantly, the public can make their own suggestions and add to the list.  Since launching the project a little more than a month ago, we’ve already received nearly 600 suggestions from the public . . .  and we’ve added titles to the list based on public feedback, ranging from Moby Dick, to The Words of Cesar Chavez, to children’s favorite Click, Clack, Moo. (Editor’s Note: We’ve added a glaring omission ourselves at #90.)

We’re looking to add more in the near future and throughout the life of the project, as the list is a work in progress. Like America itself, work is constantly changing and evolving, and the list is a work in progress. I certainly hope that teachers will take this opportunity to engage with us in this unique way. We make it easy for anyone to suggest a book. The site also includes Labor Department resources related specifically to the books on the list. It’s a terrific way to learn about the mission, history and resources of a federal agency that plays such an important role in people’s lives.

Carolyn already claims to have read Quality, Productivity and Competitive Position when she was in high school. And she correctly points out that the book Little Women “is a story about women and ambition . . . long before women were allowed to be ambitious.”

She sent me How to Win Friends and Influence People off the list for the holidays.  I’ll take the hint, and now, I have some reading to do.

98 Books That Shaped Work In America

Carl Fillichio heads the Labor Department’s Office of Public Affairs. Learn more about the department’s 100 years of service by viewing an interactive timeline  and watching a special centennial video  at dol.gov/100; 98 Books That Shaped Work In America

5 Simple Ideas That Can Transform Your Teaching

The school year is a marathon, not a series of sprints. You have longer than you think to help students learn by transforming your teaching.

50 Examples Of Analogies For Critical Thinking

By forcing students to distill one relationship in order to understand another, it’s almost impossible to solve analogies without understanding.

Can we design a school that’s more inherently sustainable? Our 7 principles of sustainable learning focus on to place, limits, scale, & more.

How To Create A Forward-Leaning Curriculum

How do you create a forward-leaning curriculum? Situate non-judgment, openness, and empathy as the true keys to 21st century competency.