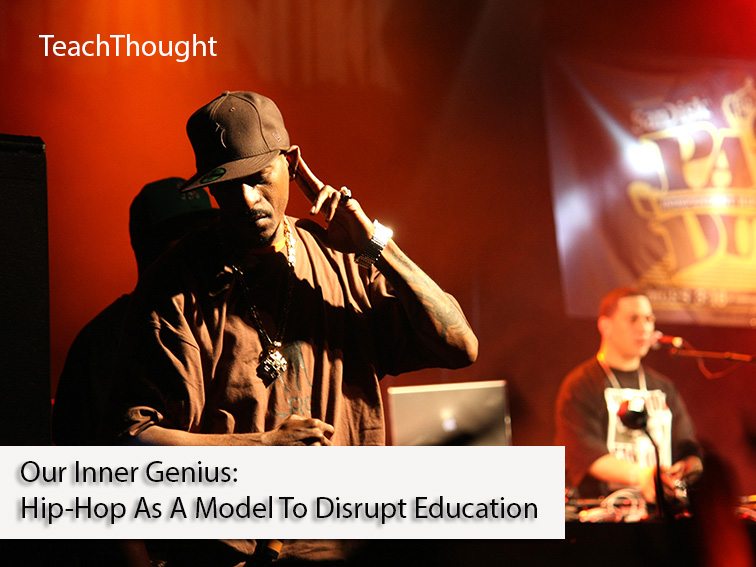 Our Inner Genius: Hip-Hop As A Model To Disrupt Education

Let’s begin with a distinction–rap and Hip-Hop are not the same thing.

Rap is one element of Hip-Hop.

Hip-Hop is a cultural phenomenon and movement.

From an academic perspective, Hip-Hop is a Montessori education whereas rap is one size fits all standardized testing; especially now that rap has been co-opted by big business. The contemporary mainstream rap you hear is misogynistic, homophobic, violent, and abusive, whereas Hip-Hop was born on the principals of peace, love, unity, and having fun.

In the beginning Hip-Hop didn’t even have a name. 40 years later, it has created its own economy with a yearly GDP in the neighborhood of 650 billion dollars. The movement, that later became known as Hip-Hop, was born from the ashes of drug invested, poor, and violent communities.

Kool Herc’s park jams and Bambaataa’s trip to Africa began to shift the consciousness of the community: Stop the violence and have a good time. Satisfy your competitive spirit through dance. Rebel through visual art. Grab a microphone get the crowd hype, and keep the party going. This was Hip-Hop, pure and authentic, before it was called Hip-Hop.

At its roots, Hip-Hop is innovation. Combine Thomas Edison’s creation of the phonograph in 1877, with the reduction of the cost of turntables in the 1970’s, add in the disco club scene, and you have innovation at its finest. The mixer, which allowed the DJ to continuously loop the “breakbeat” of any record, helped to create the Bboy; which took park jams to another level.

Grandmaster Flash and others brought in the cutting and scratching of records, which began a new sound of music production. Mix in the emcee, and the rest is history.

Like Rock and Roll, Jazz, and The Blues before it, Hip-Hop, created by historically oppressed and disenfranchised people was born. This new genre was different than the others however because it was also a cultural and economic phenomenon. Hip-Hop spoke to the marginalized majority all over the world, is the voice of a generation, and continues to create jobs and careers for many.

Although Hip-Hop is now etched in the global consciousness and carries tremendous inspiration and economic vitality, that power has not yet been taken to scale in one of the pillars of our society–the education system.

Education in America has a pretty straightforward history. Early on, if you could afford it you could receive a formal education. Public schools bloomed in the late 19th century and were designed to help staff factories and increase labor for the benefit of corporations.

Public schools weren’t designed to create entrepreneurs – that was the job of private schools. “Private citizens” have always run the country. From the continental congress to big business, property owners and the concept of free enterprise has driven the laws and behaviors of our nation.

In 2000, George W. Bush helped to facilitate the No Child Left Behind Act. This “act,” was supposedly instituted to decrease drop out rates, and close the so-called achievement gap. The problem was, and continues to be, America uses old paradigms to fix new problems. Racism and discrimination continue to plague our every thing we aspire to be.

And due to Stockholm syndrome, we unconsciously continue to come up with solutions that satisfy our historical status quo. As we can see, this status quo has repeatedly failed us –war and poverty continue throughout the world–so, not coincidentally, does an apathy for academic work in classrooms.

The Impact Of Top-Down Change

No Child Left Behind was created with this paradigm. How do we know? We tried to increase graduation rates and close the achievement gap by instituting more testing, not better teaching thinking one would cause the other. In grades 3-12, throughout the country, students are tested yearly by their respective states to track progress, share data with private companies, and participate in economic eugenics.

We know that innovators drive our economy, yet we created policy that teaches and tests the innovation out of people.

Adding insult to injury has been the creation of test prep curriculum, pedagogy, and discipline codes that continue to keep the historically disenfranchised both physically and psychologically in bondage. Moreover, No Child Left Behind was only being implemented in public schools. Private schools remained places for thinking creatively and critically, which maintains our historical status quo. No Child Left Behind, ironically, continues to leave public school children behind!

The paradigm of the no child left behind policy continues with Race to the Top, the Charlotte Danielson teaching framework, and new teacher evaluation systems. In many non-union charter schools across the country for example, where the demographics consist of mostly white staff and black students, children are not allowed to talk during breakfast or lunch, or during hallway transitions.

The Problem With Data

This would never happen in private or middle class public schools. Why do poverty stricken children of color need to be treated this way? Furthermore, in both district and charter schools, the obsession with testing has lead to the “Driven by Data” initiative, which proposes at least 4 additional one size fits all interim practice tests throughout the school year. If teachers do not get their kids to pass these tests while fitting into the Charlotte Danielson box, they might be in danger of being fired–union or not.

One of the best examples of how a policy rooted in testing doesn’t produce students ready to tackle real world challenges, involves the first graduating class of the first KIPP charter school. In 8th grade they had the 5th highest math scores in New York City. But 6 years after enrolling in college, only 21% had graduated.

The genesis of Hip-Hop brought solutions to the community. It decreased the crime rate, and established an economy. We now need a Hip-Hop mindset in public education, especially in our most needy communities.

We need nursery schools to help close the language and executive function gap, early childhood and elementary education rooted in a Montessori approach, as well as a systematic literacy program rooted in phonics, phonemic awareness, vocabulary, fluency, and comprehension.

A math program that is also systematic and sequential, and an upper elementary and secondary curriculum rooted in student interests and passions, writing, expeditionary learning, seminar and cooperative learning.

Finally, students should learn entrepreneurship and digital literacy and be made aware of careers both locally and abroad. Through the curriculum, narratives replace grades, portfolios are the standard and students are assessed on what they can do, in the context of the multiple intelligences, as opposed to just what they know.

To Permanently Disrupt Education, We Must Tap Into Our Collective Genius

This approach, a Hip-Hop approach, will create the innovators we need to solve the problems of our society. Regardless of its connotations, Hip-Hop is the American way–a way of life, thinking and being. An instinct of survival, individualism, communication, and pride.

To permanently disrupt education, we must tap into the individual genius of our teachers and students and local community members, creating a system of education designed to cultivate bottom-up innovation.

Our new paradigm must be about peace, love, unity, and fun. Let us reinvest in teacher training focused in these areas. Instead of investing in testing, let’s invest in nursery schools, mental health, and global citizenship driven by the innate and dormant genius of the people.

Hip-Hop was forced to rise from the ashes, showing us the way.

Jamaal is principle at Cornerstone Academy for Social Action Middle School in The Bronx. You can find him on twitter here. Image attribution wikimediacommons and flickr user wikimediacommons