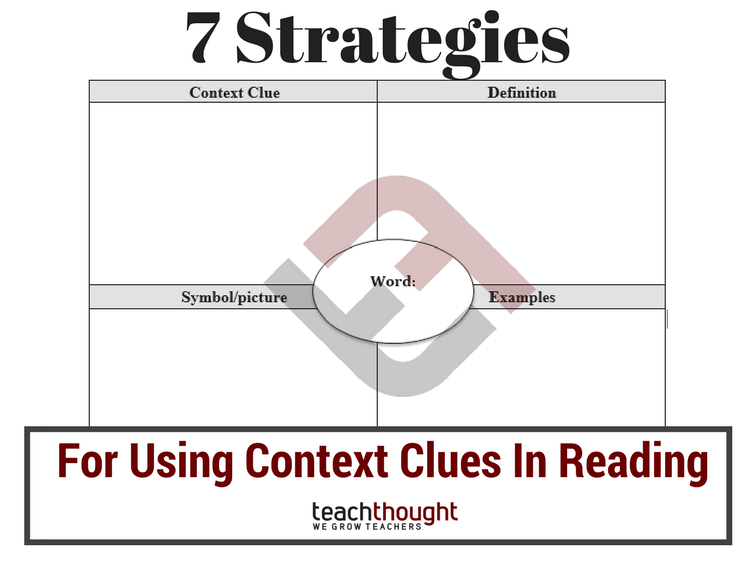 We often ask students to use context clues to figure out a word’s meaning. That makes it is our job as teachers to formally teach how authors use them.

In doing so, students become armed with an inventory of ways (such as reading response questions) to access unknown words to help gain a deeper meaning of the text. Without awareness of the types of context clues, students are at a disadvantage to decipher meanings for themselves.

Teaching this skill supports self-agency so students can define unfamiliar words independently. The following are devices that authors use to incorporate context clues into their writing. The point is not that students memorize each type of context clue. It is more that they come to understand that authors give hints in all kinds of ways to help readers figure out what words mean so they are alert to these devices.

Although the following list seems straightforward, neat and tidy, demonstrate to students to read the surrounding passage in which unfamiliar words appear. This helps readers infer a word’s meaning and appreciate the entire passage where the word resides.

The idea: Break down the different parts of a word—base word (word stem or root word), prefixes, and suffixes—to figure out what it means. Some words have a prefix only (reread), a suffix only (reading), both a prefix and a suffix (prereading), a combination (unreadableness), or neither (read).

Discrimination
Dis-: not, opposite of, reverse, deprive of; apart, away
crimin: verdict, judicial decision; judgment
tion: indicates the word is a noun

The idea: Look for a definition or an explanation within the sentence.

• Discrimination or unfairly targeting one or more groups by those who perceive themselves to be superior can cause distress.
• Vulnerable people are oftentimes in need of protection under certain laws so others cannot take advantage of them.

The idea: Words next to the unknown word can be a clue that there is a synonym.

• Discrimination or bias can cause distress toward the targeted group.
• When people know they are vulnerable or defenseless, they tend to protect themselves to avoid harm.

The idea: Providing examples of the unknown word can give readers a clue to meaning.

• Like shunning smokers in restaurants by making them satisfy their habit outside, discrimination targets a perceived undesirable group.
• Vulnerable people, such as young children, the elderly, or handicapped individuals, might have protections under certain laws.

The idea: opposite information about the unknown word can be offset by words and phrases such as unlike, as opposed to, different from.

• Discrimination, as opposed to fairness for all people, can have damaging effects on a targeted group.
• Vulnerable people, unlike those who can stand up for themselves, tend to be the target of unethical or dangerous individuals.

The idea: Comparisons of the word help to determine what it means.

• The ill effects of discrimination are like hateful, wicked tendrils gripping the heart.
• Vulnerable people can be like fragile glass in need of care and attention.

The idea: Look for the grammatical structure of appositives which can provide a definition, synonym, or example.

• Discrimination, the act of showing bias to one group, can have damaging effects.
• The elderly and handicapped, a vulnerable group of individuals, have laws to protect them from unethical individuals.

Once students identify the context clue, orchestrate activities for students to learn the word so they can use it when speaking and within their writing. Students can complete the graphic organizer in Figure A individually or with pairs for several words using online and print resources. 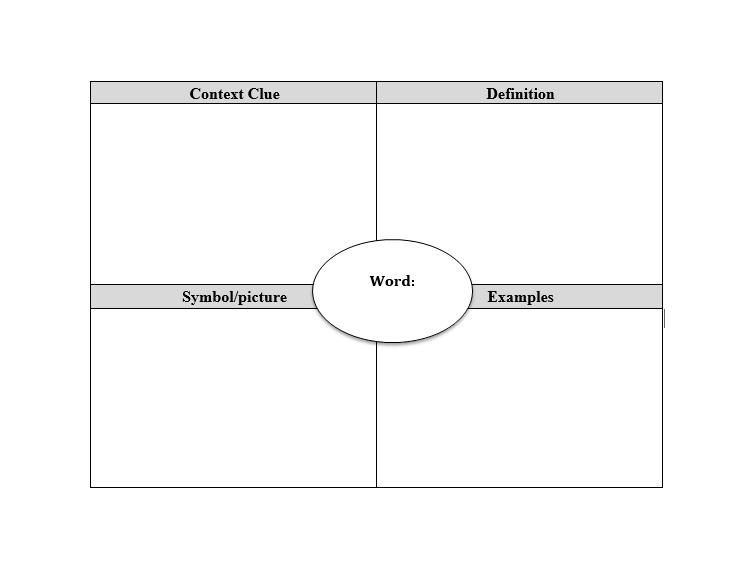 An excellent source is vocabulary.com which provides explanations and examples of words. Students can also use the organizer as a game by completing only some of the quadrants and asking classmates to use the context clues on the figure to complete the others.

Figure B provides three different options that can be assigned as an in-class or homework assignment. Adapt the tasks so students use the words expressly associated with the targeted complex text. 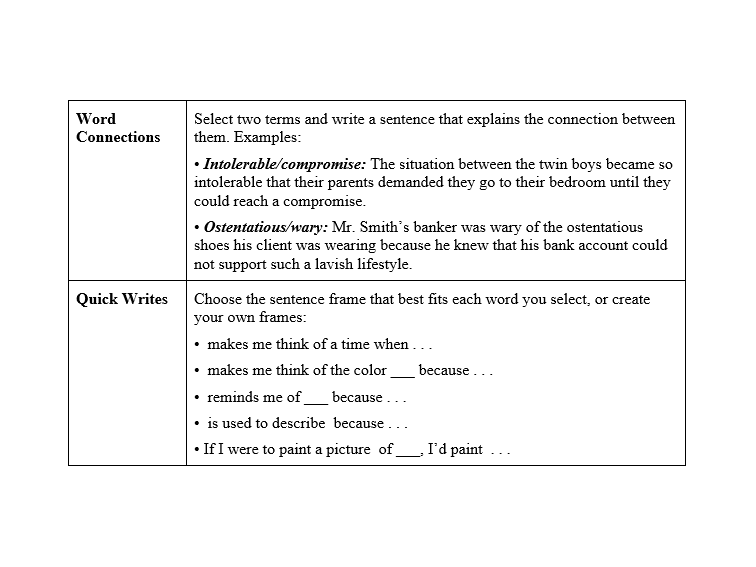 • Intolerable/compromise: The situation between the twin boys became so intolerable that their parents demanded they go to their bedroom until they could reach a compromise.
• Ostentatious/wary: Mr. Smith’s banker was wary of the ostentatious shoes his client was wearing because he knew that his bank account could not support such a lavish lifestyle.

1. Choose the sentence frame that best fits each word you select or create your own frames

2. Create examples and non-examples of your selected words

• An all-women’s school
• A board of directors for a company composed entirely of one gender or race
• Before Civil Rights laws, public schools in the South admitted only white students.

Authors do not always provide context clues throughout the text because they might have the assumption that readers come to the text knowing the meaning of certain words. However, when these clues are present, equipping students with the tools to use them productively positions them well to further their reading comprehension.

Adapted from Complex Text Decoded: How to Design Lessons and Use Strategies That Target Authentic Texts by Kathy T. Glass (ASCD, 2015).

Kathy Glass consults nationally with schools and districts, presents at conferences, and teaches seminars for university and county programs delivering customized professional development. A former master teacher, she has been in education for more than 25 years and works with administrators and teachers in groups of varying sizes from kindergarten through high school. She is the author of Complex Text Decoded: How to Design Lessons and Use Strategies That Target Authentic Texts. Connect with Kathy through her website, www.kathyglassconsulting.com.