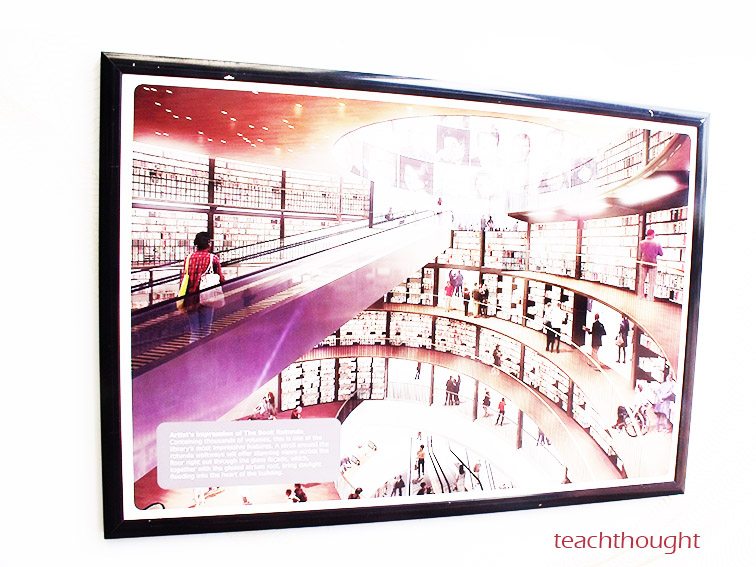 So how we organize those books is no small matter—and deserves additional scrutiny as technology changes things. Let’s look then at this idea first as a matter of symbolism, then function: What books are, and how that suggests we think about them.

The Part About Symbolism

At their fundamental level, books are documentations of knowledge, process, and context. Writers know a thing (or seek to know it), and then frame thinking about that thing somehow (choosing some kind of angle to approach their topic) depending on their purpose–what they’re hoping the text says or accomplishes in sum.

That part is fairly mathematical; the context bit is more indirect. We think in ways that reveal the collective statuses, biases, and norms of our circumstance. How we think is a universal condition that is necessarily shared. In that way, books written at the turn of the 20th-century about electricity would speak about electricity differently because electricity was alien and frightening and new.

Put another way, electricity was different than that it is now, because ‘electricity’ is just a word that seeks to describe some a fluid condition. The world changes. Meaning changes. Forms change. Words are made of the softest kind of clay, and change as they are handled and used.

There is also the matter of writing. A topic (like electricity) can be as simple or as complex as a writer intends to see it. Continuing with our theme of electricity, consider the possible approaches to writing a book about electricity:

A book about bicycles might itemize itself as a matter of function, analysis, or consumerism. The Incredible History Of The Humble Bicycle. Sell Your Car & Buy A Bike. The Advancements In Bicycle Technology. The Zen & Art Of (Bicycle) Maintenance.

You can make sense of bicycle as a symbol in any number of ways because it’s a symbol.

Through prior millennia that humanity has collected into cultures that create ideas worth sharing, drawings and oral storytelling were two of the dominant forms of expression. And while the Story of Gilgamesh is one of the earliest written stories (sometime around 2700-2500 BC), it wasn’t until thousands of years in the 15th century that Johannes Gutenberg helped makes books easier to print with his advancements in moveable type. This ushered in the era of the book that has lasted for over 500 years, a period of time when the book itself has taken many forms and birthed new genres.

The form here–books–have become such a part of our native schema that we tend to think in terms of books just as we have learned to think in terms of words. Consider how crazy that is! To think in words–themselves collections of minor symbols (letters) that, in the right sequence, form another symbol (a word) that, as a matter of both function and syntax, cooperate with other symbols (more words) to form sentences which we hope convey meaning. And that’s not how we communicate, but how we think.

For the last several centuries, when wanting to communicate suitably complex ideas, we then frame them as books. The medium, as a form, provides a template for thinking. Books continue to be our highest form of expression.

So, if “books are documentations of knowledge, process, and context,” what does that mean in an increasingly mobile and digital world? Yesterday’s books can be digital, but only because they’ve been shoehorned there. Books have thrived for so long because they’re relatively cheap to produce, they’re durable, they cost nothing to maintain, and those that read them show affection for them as tools and and icons.

But compared to what we increasingly wish to do with what we read, they’re incredibly limited. Their form is a matter of prevailing local technology, and they are being usurped in terms of our cultural predilections. Why? Take a modern library, for example. Even in the newest libraries, books are arranged in terms of genre, often by the author’s last name. This is similar to a department store.

Imagine the internet being cataloged that way. Or YouTube. Libraries are far more rational and exact in their arrangement—it’s all extraordinarily left-brained and painfully precise. The Dewey Decimal system is both cold and efficient in its structure.

If a library were YouTube, it’d have other suggested books.

If it were twitter, it’d be a digital stream that connected people asynchronously.

If it were Google, it’d be searchable.

If it were facebook, you could see how others searched. What they found, and what they thought about it.

If it were reddit, sharing the most interesting nuggets would be as much a part of reading as the decoding and the comprehension.

This doesn’t mean a library should be anything like YouTube or Google or facebook or reddit. There’s no reason a book has to change at all; it could be that they’re like sharks, so perfect in their design that they evolution doesn’t touch them. But seeing books as a matter of media form–and thus a template for thought–does give us several points of contrast.

Language Is Crazy Because We Are

The beautiful thing about language is the absurdity of its mechanics. Everything is a metaphor.

From the outside looking in, things are symbols—objects with referents. And we don’t even have to get into the semantics and linguistics of it all. Imagine taking a walk, and looking up to notice a tree that’s blooming for spring. When you do so, you can think of that tree, or you can think of a more vague tree-ness. ‘That’s a tree’–as in, ‘I see that tree only insofar as it is a tree.” You think more of the referent than the object—more about its classification than its true self.

You may also do both—first have your attention caught by that tree, and then think of the more general trees: other trees it reminds you of, the outward strength of trees, the shade trees provide, how long it must take trees to grow, and so on.

But for the vast majority of things you encounter on a daily basis, it’s much more simple and brief: You see a thing without seeing it at all. On that same walk down the street, you’ll pass thousands of objects that all retreat into an opaque whole. People walking, cars driving, birds flying, doors shutting, and children playing—all visible as objects, but invisible as symbols.

Most libraries today–and the books within them–are kind of the same way. They’re an opaque whole. The parts are there and highly browsable, with spines pushed out against the edge of row after row after metal-shelved row. Books may or may not need to change. Making text searchable or instantly translatable to any language, or having every single word or phrase or sentence link to a digital context–these represent added utility to the book–the physical book printed on a paper page–as we know it. Maybe make them water resistant or fire resistant–and either make it harder to publish bad books, or easier to separate the good from the bad.

Digital text scales elegantly. Libraries can’t. As the world’s book collection grows and brilliant books get pushed to the back by the strength of pop culture, the solution in a digital library is a matter of design. In a physical library, the constraints of space and cataloging present considerable challenges–not to mention an aura of quiet and 8-track cassettes and dust. The librarian, in this case, simply becomes a busy curator: What stays, and what goes?

So do we add tablets and laptops to the shelves of books until the former outnumber the latter? Do we insist on a balance? What kind of balance? Add 3D Printers and makerspaces? What’s the point of a library? What should it do for a community? A culture? If people stop going, do we chastise their aliteracy, or change what a library is?

That’s a pretty good starting point for understanding the challenge of keeping libraries relevant in the 21st-century and beyond. In fact, libraries may represent an opportunity to not merely respond to technology, but actually lead in education innovation, changing how we think of books and media–the symbols that represent the fundamental human need for information.

Adapted image attribution flickr user elliotbrown; Innovation In Libraries Can Lead To Innovation In Schools; a version of this post was first publish on edutopia; the author (me) recognizes it’s overly wordy and could stand to lose 500 words or so; sorry about that