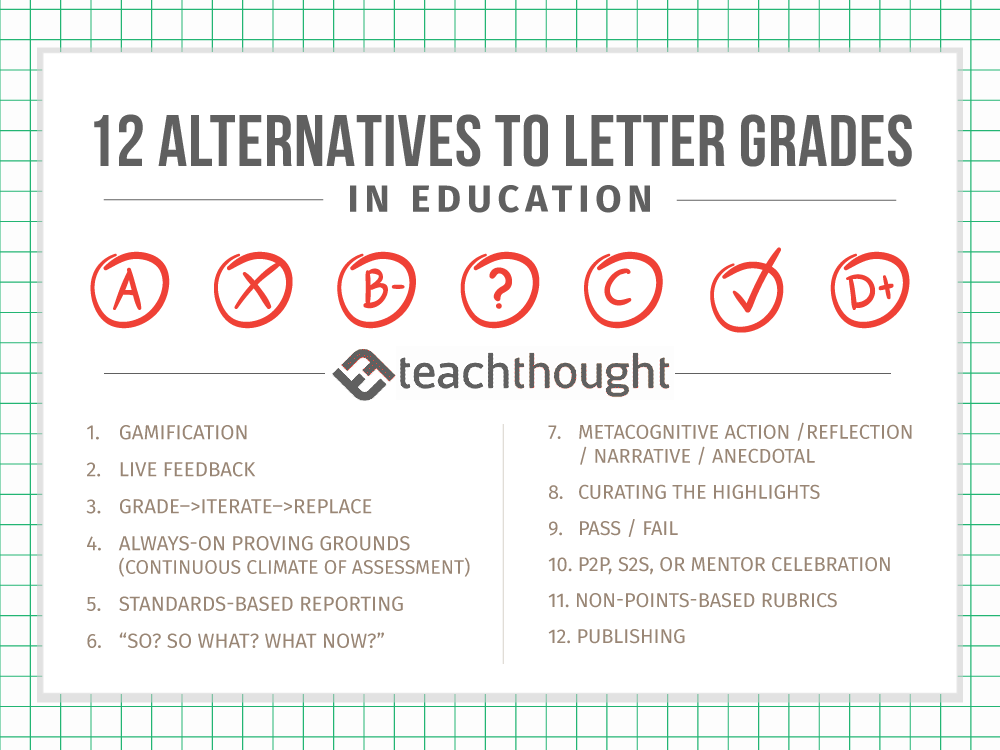 12 Alternatives To Letter Grades In Education

Few artifacts of formal learning are as iconic as the letter grade.

He’s always gotten As and Bs in all of his classes.

Then we turn the letters into numbers–letter grades become averages of letter grades, which, when calculated, determined whether or not a learner qualifies to play sports, get into college, or thinks of him or herself as ‘smart.’

You’re not getting into Stanford with that GPA.

It is an incredibly powerful symbol that isn’t going to be erased by long-winded rhetoric. Learners and families–far and away the most vested stakeholders in education–understand them. They ‘get’ what a B means, and what an F means.

The issue is, in all honesty, they probably don’t.

The Failure of the Letter Grade

The letter grade fails because one its primary functions–to communicate learning results to learners and families—cannot possibly be performed a single symbol.

Further, the letter grade ‘pauses’ learning–basically says that at this point, if I had to average all of your understanding, progress, success, and performance into a single alphanumeric character, it’d be this, but really this is over-simplifying things because learning is messy and understanding is highly dynamic and perishable.

But parents don’t want to hear about understanding because it’s grey area that doesn’t make sense. It sounds like spin. It’s subjective. Complex. They want it to be distilled for them–and rightfully so, but that reduction dissolves the honesty of the learning process. Conversations with parents turn most frequently on missing work, learner temperament and/or attendance, or the letter grade. Rarely does it explore the value or utility of knowledge, creative thinking or curiosity, or even the crucial ability to evaluate information or apply and transfer what’s been learned.

So that leaves education in a tight spot. Parents need capacity as bad as the education system itself.

While standards-based grading is one attempt to reduce how subjective letter grades are–measure and report proficiency based on standards as ‘grades’–this is only a step in the right direction. Here, at least parents know what a grade is based on, but they still don’t know any more about what their son or daughter understands.

The ideal ‘response’ here isn’t a single change, but a total merging of schools and communities. But until that happens, there are options.

This idea has never really found traction in most public school classrooms, but a comprehensive system of badges, trophies, points, XP, achievements, gamification can help clarify the nuance of learning. Such an approach–with all of its tools and tactics and systems–is capable of far more resolution and precision than a letter. For starters, here are 10 strategies to make learning feel more like a game.

Here, students are given verbal and written feedback immediately–as work is being completed. Live scoring without the scoring and iteration. No letters or numbers, just feedback.

Make an audio recording of the event. Or video. Livestream it. Make it a ‘podcast’ ( but private–so an audio file, basically) for parents to listen to with their child on the drive to school each morning. Live feedback for critical learning objectives is difficult and not sustainable for every assignment but is far more enlightening for all stakeholders, and thus a valid alternative to the letter grade in spots.

Grade–>Iterate–>Replace: In this process, work is graded as it traditionally has been, then, through revision and iteration, is gradually improved and ultimately curated. Eventually ‘lesser’ performance (as determined by students, peers, families, and teachers) is replaced by better work, but without the grades.

Grades simply jump-start the revision process and that’s it.

4. A Continuous ‘Climate of Assessment’

In this model, assessment never stops–the result of one assessment is another. Not tests but demonstrations. It doesn’t stop, so rather than halting the process to assign a letter, the process continues on.

In this ‘climate of assessment’ what would be reported would instead be achievements, trends, strengths, areas for growth, pace of change, and so on. This could be directly connected to gamification (see #1).

This one replaces letters with numbers, so it’s really not much better but it can reduce the subjectivity of grading.

Here, students are asked–and ask themselves–at the end of every assignment–So, So What? What Now? This is similar to #4 above, but leaves the next step up to the student. Okay, you’re ‘finished’ with this work. Now:

So: What did you ‘do’? Summarize details and big picture

So What? Why was this work important?

What now? What is the logical next step with this assignment, idea, or topic?

This approach dovetails behind #6. Rather than halting the learning process with a letter-as-performance-indicator, instead, learners are tasked with reflecting on their thinking process–not as a patronizing ‘tell the teacher what they want to hear’ activity on an exit slip walking out the door, but as a measure of their understanding and intellectual growth.

This can be based on metacognition, reflective on the progression through the content, or more anecdotal about the learning process itself.

A variation of the reflective and anecdotal approach, curating the highlights amounts to the student and teach getting together to extract the highlights of an assignment or the process of project-based learning. Portfolio-based work isn’t new–and has its drawbacks as well, namely that specific skills and competencies are difficult to measure objectively.

There is also significant subjectivity evaluating these kinds of projects. It can bs stressful, is difficult to match with standards, and often centers the teacher instead of the student if not done well (meaning the teacher is tasked with designing, assigning, managing, organizing, grading, etc.–and that’s no efficient or fair).

That said, no approach is perfect and all we’re doing here is brainstorming, anyway. And portfolios should likely be at least part of any solution of alternatives to letter grades.

No letter grade–you either pass or fail. Not a great solution to anything other than the shades of grey between an A and a D, but an alternative nonetheless.

Gather with peers within and across schools to celebrate academic and learning success. No grades necessary–just planned visibility from the start of the project with diverse groups of peers. Peer response can also be embedded throughout a lesson or unit by design, rather than only at the end as a summative evaluation.

This is much like the current systems–student performance is still evaluated against a rubric, but not grade or points are ever assigned. It is up to the student and their family to determine ‘how they did.’ The goal of the teacher is not to grade students, but rather to support learners. Students will wiggle and writhe trying to turn the rubric’s assessment into a letter grade, and that’s fine.

As a teacher, you’ve moved on to taking data from that performance to plan the next steps.

This one was hinted at above–when appropriate, make the learning public. Publish it.

Note, this doesn’t have to threaten student privacy. Consult your principal, colleagues, and parents if you’re unsure but such publishing can be anonymous if necessary. The goal is that it’s visible to families, peers, and communities for whom the work will resonate.

Peers can collaborate on revisions, families can respond, communities can celebrate or scoff, but the process has been decentralized and, in a way, democratized. This approach won’t work for every student every time, but the idea is sound–return the stakeholding to the stakeholders. This approach is likely only useful in certain situations

Ed note: This post was originally published in November of 2012 and has been updated several times, most recently in February 2020