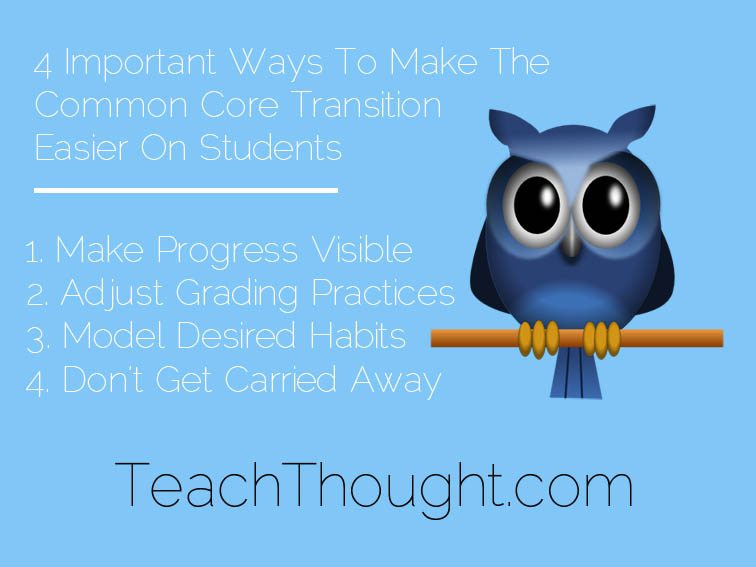 by Judy Willis and Terry Heick

Like killer bees, the Common Core Standards have been coming for what seems like decades now, and with a similar tone of doom and despair. (Or hope and interest, depending on your perspective.)

Most of the adjustments discussed are focused on curriculum and technology, but there is the matter of the students.

What do they think of the standards?

What are their concerns?

What should their role be in the formation of curriculum and subsequent lessons?

And how should “spin” the changes students will see?

We’ve seen students’ responses to sustained or frequent frustration or boredom increase as school have become less engaging and relevant. The students who were able to persevere and succeed by following rules, procedures, and retrieving the right answer to questions are now at risk of stress responses due to shifts in assessments.

As educators have been anticipating the requisite 21st century skill sets that are now the goals of the Common Core State Standards, their assessments have included more interpretation of information and novel problems for which students must apply what they learned in new ways. These teachers have been describing a disturbing response by some students to these more open-ended test questions for which memorization of rote facts is inadequate preparation.

Those students who were previously high achievers are showing fight/flight/freeze stress responses when tested with single-response questions. For these students, who had obediently and very powerfully memorized all the information they were given, the loss of predictable test questions linked to their matched answers is unfair.

They had been highly successful at compliance, process, and memorization, but have not developed the conceptual understanding or cognitive flexibility needed to respond to unpredictable questions. self-directed assignments, and the kind of open-ended thinking so much of modern learning seems to suggest. In some cases, teachers describe profound emotional reactions including anger, hostility, retribution (such as false accusations of teacher misconduct) and more subtle but equally disturbing behavioral changes of withdrawal of participation and effort, depression, and even increased absences from sick days.

There is no research available about the absolute cause or extent of this phenomenon. Perhaps the responses are so profound and unexpected that these stories are getting disproportionate attention. Nevertheless, it serves all students if we consider how to introduce the changes in information acquisition and application to make the transition less stressful to students.

Whether through gamification (and leaderboards), standards-based grading, artfully visualized data, clever use of digital portfolios, or some other approach, for many students the concern is not so much learning, but “performance”–how are they “doing”?

Adjust Grading Practices: Put It On The Rubric!

It’s difficult to tell students to take risks, work collaboratively, and think creatively, then grade the way you used to. Whatever you encourage, put it on the rubric.

Modeling, often through think-alouds, can help demystify any new “stuff” you’re asking students to do.

Don’t Get Carried Away

If students are wigging out and parents are wigging out, it may because you’re overselling the differences between the Common Core Standards, and “what you used to teach.” For many teachers, the difference between 2010 and 2014, in terms of academic standards anyway, isn’t great, having been focusing on implicit thinking, authors’ positions, and informational reading through the use of digital tools for years.

But even if you’re one of those teachers that still does shoebox dioramas and traditional book reports–and w’ere not judging!–don’t oversell the Common Core and their impact. Make the adjustments you have to make, and encourage students to make their own, but keep it all in perspective. Math is still math, and reading is still reading.

What strategies did we miss? Take to the comments below with your ideas, but please, be gentle.