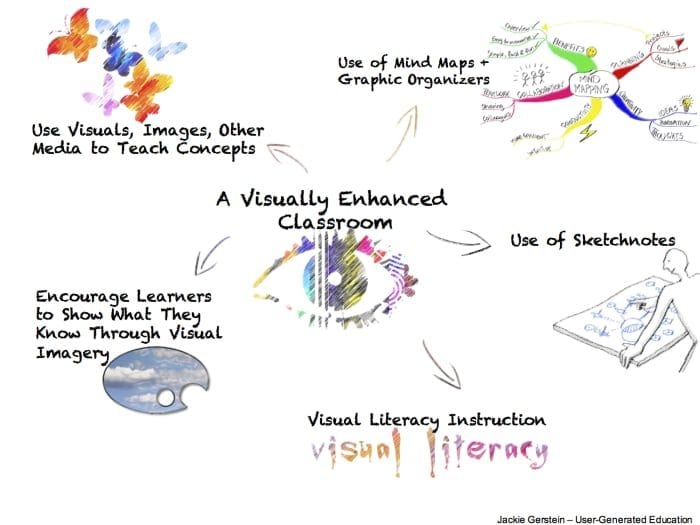 How about some strategies for visual learning?

Though the idea of ‘learning styles’ has fallen out of favor in education, the idea that there are different methods of ‘ingesting’ information and that differences between and across these methods can have a significant impact on a student’s learning is difficult to argue.

Whether learning by doing, watching, listening, or some other ‘style,’ learning ‘happens’—the key is optimizing that learning, and a part of that kind of optimization is being aware of what’s even possible. It’s difficult for a chef to plan amazing meals and menus for those meals that chef isn’t aware of the various foods, spices, culinary technology, and related cooking methods available to cook with.

The Benefits Of Visual Learning

In the first experiment, students learned the workings of a bicycle pump from interacting with an actual pump and creating a visual or verbal explanation of its function. Understanding the functionality of a bike pump depends on the actions and consequences of parts that are not visible. Overall, the results provide support for the use of learner-generated visual explanations in developing understanding of a new scientific system. The results show that low spatial ability participants were able to learn as successfully as high spatial ability participants when they first generated an explanation in a visual format.

In this case, the benefit of visual learning they examined was its ability to demonstrate complex concepts in a way a wide variety of learners could leverage equally. Unlike using essay writing to help highly-literate, motivated, and skilled writers explore abstracts concepts (i.e., highly nuanced themes in Shakespearean plays), visual learning models were effective for and accessible to a range of learners.

Bobek and Tversky’s study concluded that, “Creating visual explanations had greater benefits than…verbal ones,” explaining that “some of the effectiveness of of visual explanations is because they represent and communicate more directly than language.” The authors went on to explain that strategies for visual learning allowed teachers to use “checks for completeness and coherence” while providing “a concerted reference for making and checking inferences about the behavior, causality, and function” of a given concept.

Below are eight strategies for making learning more visual in your classroom. Feel free to add other favorites of yours in the comments below.

3. Encourage students to visually demonstrate what they ‘know’

4. Use visual physical and digital media to teach abstract concepts

5. Use concept-maps to drive creative and critical thinking

6. Use a range of graphic organizers before, during, and after learning

7. Publish and curate it

Wendell Berry And ‘The Loss Of The University’

30 Reflection Prompts For Teacher Well-Being by TeachThought Staff The big idea, though, is the reflection and gratitude. If that...