The ABCs Of Sticky Teaching 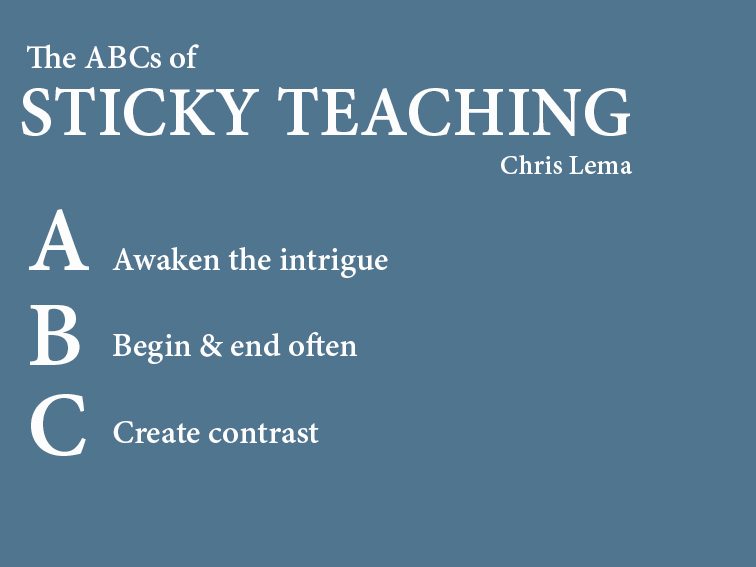 The ABCs Of Sticky Teaching [Graphic]

“Sticky Teaching”–interesting idea. Learning that lingers. Chris Lema gets at that idea in the following presentation, along with a basic explanation of why this idea works by focusing on the patterns that brains “can’t ignore.” Cool approach, so we’ve taken the six strategies, and given an example for each.

Start with a media–a game, image, music video, social problem, or biographical sketch that is compelling.

Beginning requires background, and ending requires summarizing. Instead of a drawn out lesson about a historical event, literary device, or geometric shape, begin and end often–tell six stories that all underscore the big idea you’re after.

Contrast is illuminating. The meter of a Shakespearean sonnet looks startling compared to the free verse of Walt Whitman. Slavery juxtaposing with a free and open society. The significance of religion compared to a world without it.

4. Draw them in with stories.

Everybody loves a good story. In fact, whole podcasts are based on this tactic. This American Life is a good example.

Emotion is what makes students tick. So use it. Begin and end with it. Make it necessary to complete the assignment. Give points for it. Model it. But maybe more than anything else, design learning experiences that seek first to produce and leverage those emotions, and then work the standards into that.

The big idea of the lesson–the overarching concept that pulls all of the discrete thinking and facts together–may be clear in your mind, and you may have even written on the board, PowerPoint, or blog post for all to see. But that doesn’t mean your lesson is aligned entirely with the core of that idea, much less in any way that students can make sense of it.

“Focus” doesn’t just mean repeat it often, but rather that all resources and energy and design point there.

You can see the rest of Chris’s short presentation below.

A Guide For Teaching With Analogies