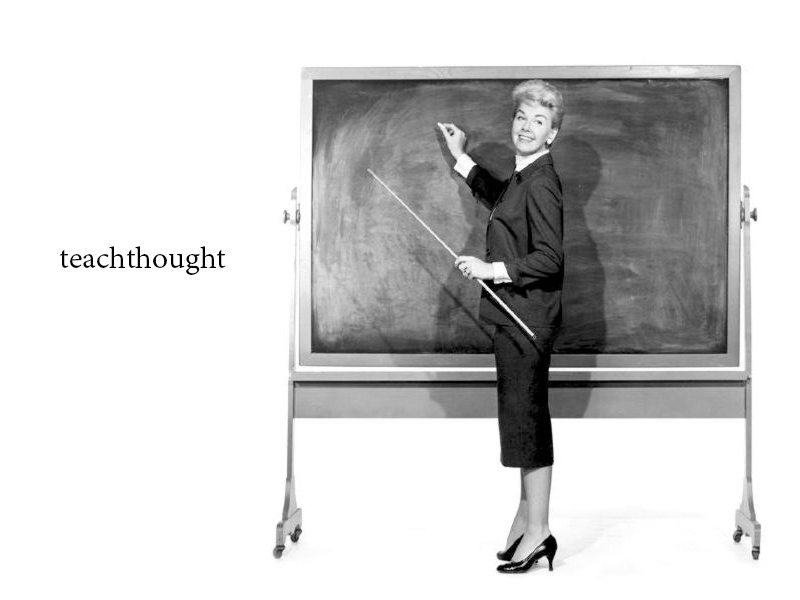 The Changing Role Of The Teacher

Ed note: This post was excerpted and mildly edited from a longer post from Grant on self-sustained learning.

What does it mean to “teach”? What should a teacher “do”?

The answer varies from culture to culture, millennium to millennium–from Socrates to Jamie Escalante, the vision changes. But looking back to the beginning of public education in the United States may offer a surprising perspective on the role of the teacher, and how it has changed since the early 1900s.

In the foundational book Democracy and Education, published in 1916, public education pioneer John Dewey ironically warns us that getting (the conditions for self-directed learning) just right as a teacher-designer requires a deep understanding of how people learn to think and solve real problems – a design that makes the learner have to truly think their way through things, and thereby believe that they are creators and discoverers (even if by design we have made the re-discovery possible):

“The educational conclusion which follows is that all thinking is original in a projection of considerations which have not been previously apprehended. The child of three who discovers what can be done with blocks, or of six who finds out what he can make by putting five cents and five cents together, is really a discoverer, even though everybody else in the world knows it. There is a genuine increment of experience; not another item mechanically added on, but enrichment by a new quality. The charm which the spontaneity of little children has for sympathetic observers is due to perception of this intellectual originality. The joy which children themselves experience is the joy of intellectual constructiveness—of creativeness, if the word may be used without misunderstanding.

The educational moral I am chiefly concerned to draw is not, however, that teachers would find their own work less of a grind and strain if school conditions favored learning in the sense of discovery and not in that of storing away what others pour into them…. It is that no thought, no idea, can possibly be conveyed as an idea from one person to another. When it is told, it is, to the one to whom it is told, another given fact, not an idea…. Only by wrestling with the conditions of the problem at first hand, seeking and finding his own way out, does he think…. We can and do supply ready-made “ideas” by the thousand; we do not usually take much pains to see that the one learning engages in significant situations where his own activities generate, support, and clinch ideas—that is, perceived meanings or connections.

This does not mean that the teacher is to stand off and look on; the alternative to furnishing ready-made subject matter and listening to the accuracy with which it is reproduced is not quiescence, but participation, sharing, in an activity. In such shared activity, the teacher is a learner, and the learner is, without knowing it, a teacher—and upon the whole, the less consciousness there is, on either side, of either giving or receiving instruction, the better.

All educational reformers, as we have had occasion to remark, are given to attacking the passivity of traditional education. They have opposed pouring in from without, and absorbing like a sponge; they have attacked drilling in material as into hard and resisting rock. But it is not easy to secure conditions which will make the getting of an idea identical with having an experience which widens and makes more precise our contact with the environment. Activity, even self-activity, is too easily thought of as something merely mental, cooped up within the head, or finding expression only through the vocal organs.” (Democracy & Education, Ch 12)

Sound familiar? Things have changed, but maybe not in the direction we’d expect.