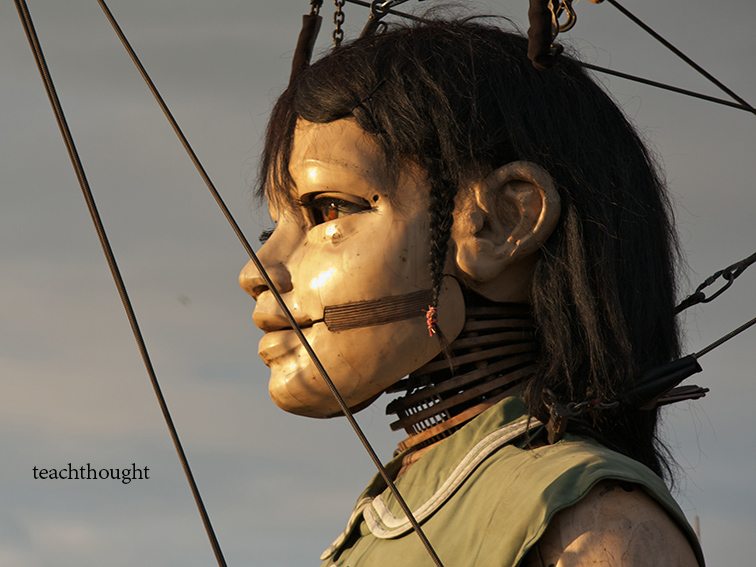 A Single Set Of National Standards Is Just Creepy

I promise this isn’t an anti-Common Core rant.

Not by design, anyway. Somehow that is so 2012. Most states are on board, and the more timely arguments are hung up on testing and edtech, and with the exception of a few really, really bothered folks scribbling devil’s horns on the Gates Foundation, most have moved on.

I am not a fan of outcomes-based learning in general, but this isn’t about that either; it’s about tone.

I get that it’s beneficial to have an agreed upon index of content to ensure all students are mastering the same material, and that teachers work together through a similar language, and that learning is measured and data is reported. As public education sits in 2014, that’s the model. Fine.

For now, I’ll pretend not to notice that it “ensures” nothing of the sort, and I’ll just say that I get why a standards-based and data-driven model looks like a good idea to a system with a history of mediocrity.

I hope that we’re clear, though, exactly what that means—that a group of folks sat down and, no matter the spin or semantics, dictated exactly what every single publicly-educated citizen of the United States will know and be able to do. And, as an effect, even what they want to do.

The standards don’t do any of that, some will say. They’re just a finishing line for you to choose how you want to get to on your own, but this isn’t true either. That’s like saying “I don’t care how you use these six colors to paint a picture of autumn colors, as long as you paint it.”

Or maybe that analogy is flawed. Who knows. Depending on how you see it, and how effective you are at arguing, there can be a dozen of perspectives here with legitimate thinking. And this is where things get murky.

The standards aren’t curriculum, but ingredients for curriculum. But that’s the thing—they’re not ingredients in function. Nor are they goals, light posts, or academic muses. They’re a national body of content—a mix of skills, concepts, and practices designed to condition minds. That’s not tinfoil-hat talk, it’s true.

Every single student regardless of background, ethnicity, gender, passion, family history, local needs, or familial expertise will study the same thing delivered in similar ways like some academic cafeteria ran by dangling marionettes with creepy smiles.

The Common Core Standards are America writ large—the unintended but hugely negligent abuse of a noble idea (educate every student the same way to a similar level) by committees and policies and dramatically robotic and thoughtless practice.

Our fascination with uniformity has something to do with our constant need to “scale” everything across billions and billions of people. This reduces the number of control points from billions to one. What’s worth understanding has been decided at a single point–one hand tugging at the strings of a nation.

Academically, the standards seem robust and rational and full.

Pedagogically, they simplify the planning process of teaching.

Functionally, they “get everyone on the same page.”

Collectively, they define what an American knows and can do–and that’s creepy.