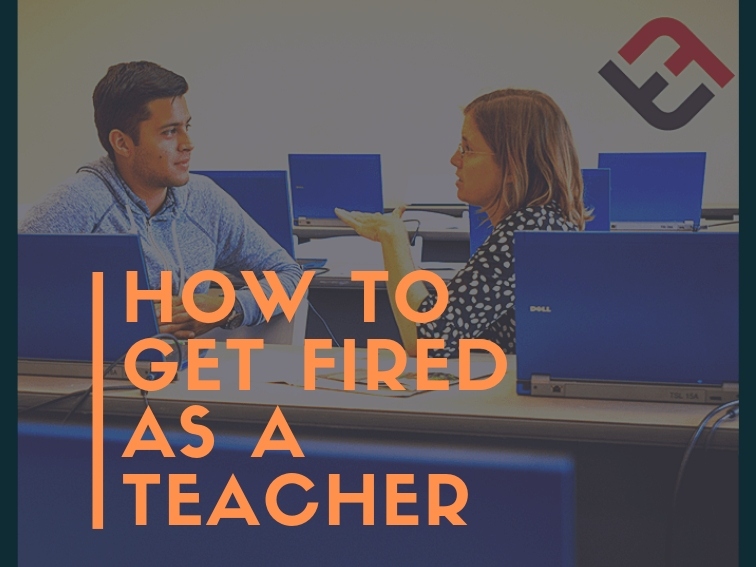 Getting fired in any profession can be tricky.

Or maybe you just want a fun story for parties or something to tip-toe around and spin at your next job interview. Whatever the reason, if you want to get fired as a teacher, it’s not as easy as you’d think. In fact, it takes real effort.

In any industry, unions and litigation for example can make things tricky. Training programs seek to address and pre-empt this issue by identifying key choke points in employee performance and adherence to company policy.

This can also be true in education, where professional growth plans and constant walk-throughs and observations from administrators provide significant opportunities to pinpoint and correct deficiencies. But fear not–I’ve brainstormed some ways you can–in lieu of all of the existing structures and resources–manage to get yourself fired anyway.

Teaching is a constantly evolving mix of art and science. That means there are a lot of new ideas that could make you uncomfortable, or challenge your skill-set. If you want to lose your job, close your mind to new ideas.

Focus on the policies that bother you.

Schools are full of bureaucracy. There are dozens of policies for every thing that might become a thing, and on top of that, policies for the policies themselves. Some are useful and the product of sound thinking; many are not. Starting the process of getting fired as a teacher can be as simple as focusing on the bad policies that you dislike rather than helping create new ones that make more sense, or designing ways to mitigate the effects of the ones you can’t change.

Focus on policies in general.

This will get you thinking like governments and industries think, where people are cattle that need rules because they lack the ability to reason. And the more you think like the government, the more likely it is that you’ll be replaced soon enough by someone that doesn’t.

This is a relatively new way to get fired, but it is a way nonetheless. And easy, too. Also leaves a digital record that makes follow-up lawsuits and criminal proceedings simple enough. If you want to really ramp up the urgency here, text with them after midnight about non-school stuff.

Sarcasm comes from the Greek word sarkasmós, which roughly means ‘to tear flesh.’ If you want to get fired, use words to tear the flesh of impressionable children who are looking to you for modeling and leadership.

We could argue about the definition of ‘progressive,’ but for this one let’s just say that fitting in is important. (See the ‘policy’ items above.) If you want to get fired as a teacher, push back and stand out and rail against the Draconian authority of the district that still wants to throw pizza parties to get students to read, and considers basic 1:1 device programs as absolutely avant-garde.

Be unaware of district policies.

This one is surprisingly effective–especially certain parents who know certain school board members who knew you were being hired before you did and have the superintendent on speed dial. Instead of educating parents on equal terms in a pattern of ongoing dialogue, choose instead to usurp any authority they appear to have over their own children, because after all you’re the expert, not them.

This one is a classic get-fired strategy that works almost anywhere, and needs little explanation, Ithink.

Be careless with student interactions.

Text with them. Be friends on Facebook. Give them rides home–maybe even without letting parents know. If you teach students in grades 8-12, you might try conferencing alone with students of the opposite sec in your room with the door shut. Maybe hug one to celebrate a watershed moment in their growth as students. Maybe even use profanity here and there to show how cool you still are.

Combine just a few of these, and you can get people talking.

As a teacher, you’re given oodles and oodles of feedback. Formal and informal, it’s rarely unclear what people think about the job you’re doing. While their feedback isn’t always accurate, it is an indication of what they believe. Ignore what the people around you think and believe–especially about your own teaching performance–and you’re well on your way to losing your job.

Be negligent in regards to a child’s safety.

Whether it’s eating peanut butter or losing a student in a theme park on a field trip or doing a science experiment you saw on YouTube that’s actually life-threatening to all but the very back row of the classroom, creating safety concerns for kids may be the only way to get fired faster than mishandling money.

Things are bad, and it’s your job to let people know in case they hadn’t noticed for themselves. And even if they had, it’s your responsibility to continue bringing it up. Do this in front of the right people consistently enough and you’ll be well on your way to a new career choice in no time.

Make it about you.

It was your decision t0 become a teacher. Then you got a certificate and then an interview and then a job, at which point they gave you your own classroom and your own roster of young minds to mold, year after year. It makes sense, then, that you’d make ‘your teaching’ about you and what you wanted and how you were being mistreated and how your ideas are consistently ignored.

Want to really ruffle feathers at the next staff meeting? Roll your eyes as they roll out another new program or policy or anything else new. Doesn’t matter really. Just make it clear that you’ve been around long enough to see these newfangled ideas come and go. ‘This too shall pass,’ you tell yourself when asked to implement project-based learning and share students reflections and artifacts through Google Drive with classrooms in other parts of the world.

For a short while, you’ll get ‘hallway cred’ with other teachers who wish they could do the same but they have a mortgage and kids and need health insurance. Eventually, though, an administrator will likely ask to speak with you in private.

After having done so, you’ll have your best chance ever to get fired by choosing just the right moment to let an especially dramatic exhale fly during the next PD that you didn’t need anyway because it wasn’t your idea to spend $48,000 on iPads. They could’ve hired another teacher with that amount!

Show up late to everything.

How effective this is at getting you fired depends on the school and climate and your relationship with colleagues and so on. At the very least, it can give the appearance that you either don’t value other people’s time, or imply you have more work to do than everyone else and that’s why you were late. Either can be strong first steps in getting fired as a teacher.

Disorganization (along with a lack of classroom management) can derail even the most promising teaching career. Whether or not it can get you fired depends on what your eyes disorganized about. When state testing rolls around, try mixing-up student answer booklets. And start 12 minutes later than everyone else in the school. And forget to lock-up testing materials when you go to lunch. State-testing + disorganization is an especially strong combination.

What Is Four-Dimensional Questioning?