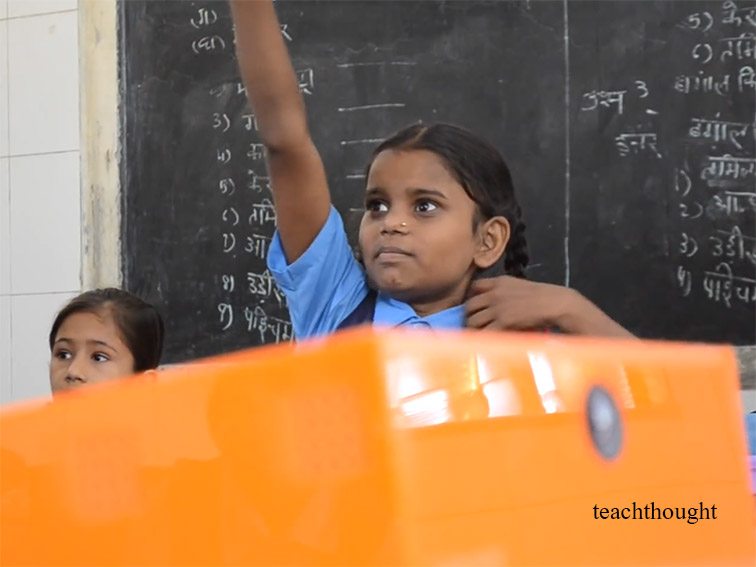 How I Use ‘Check For Understanding’ Questions In My Teaching

contributed by Dan Henderson, Author of That’s Special: A Survival Guide To Teaching

As adults we often take for granted our wide range of vocabulary and the comprehension that comes with applying knowledge while writing.

Too often in my younger years of teaching I left check for understand questions (CFU) out of my lesson. I would accept one answer from the brightest student then moved on assuming everyone absorbed one student’s response. It was only until I asked my students to write a story about being thrifty did I realize how they really didn’t comprehend the meaning of the word. The word thrifty was interpreted to steal.

With all great teaching you have an example or model an activity for your learners to re-produce. This story was about a young boy named Marco whose family had lost everything in the Great Depression. Before this time this affluent boy’s family had a family car and a butler probably named Jeeves. When the Great Depression hit, the family lost everything, even their beloved man servant. Jeeves would no longer clear the sidewalk of the dirty lower class off the New York Streets separating Marco from the commoners. Marco’s family had to sell almost all their possession and his toys. Marco was left with a barren room, and they were barely able to continue living in their home.

Learning to be deprived of material possessions did not come naturally for Marco. Marco devises a plan to obtain what was lost. His favorite toy train made of gold and red trim was located in a shop on 57th street. Marco steals the train by placing it in a bread basket secretly hidden under a towel. Marco’s momentary joy is regained when playing with the train alone in his room. Suddenly a loneliness strikes his heart, and he cries for he misses his only friend, Jeeves.

Marco searches for friendship on the busy streets of New York. Marco sees a group of boys playing and pauses to see if he will be accepted. From the reflection on a busy street corner window, he realizes he is the riff raff Jeeves used to kick to clear a path. The children playing in the ally have used tires and a random collection of toys. Marco gives the boys the bright new train, and he is instantly accepted into their social circle.Marco realizes all he ever wanted was friends.

Marco goes to his barren home and finds odds and ends in the basement to make toys. The text uses the word thrifty to describe Marco. Marco takes his thrifty self to showcase his new toy to the ally boys. Moral of the story is friends are more important than money. Cue white shining light breaking in from clouds as the main idea that friendship is more important than money takes root in all of my students consciousness. My students must take this lesson and give me an example of how they can be thrifty at home.

My homework assignment is for my students to find something they can reuse with a friend to be thrifty. They must find an object in their home to create a two paragraph persuasive argument about how they would benefit from reusing an item. I do not ask any follow up or CFU ( Check For Understand ) questions about what students believe the word thrifty means. The next day we review the assignment as a whole group. Hoping my lesson hits a home run I ask Daniel MacFarland a CFU question the following morning.

“Daniel, can you define thrifty and describe how you found something in your house to re-use?”

“Sure.” Daniel says with a pause to compose himself. “Thrifty mean to take something without getting caught to make friends.”

I pause tilting my head at an angle to give Daniel the benefit of the doubt.

“When you mean take something, do you mean reuse something that you own?”

“No, I mean taking something that someone else has and hiding it in an ally with the other boys so you don’t get caught,” Daniel says proudly.

“What, no, no, no Marco or the boys in the ally did not steal, they were poor and made do with what they had in the ally. Marco was punished for stealing the toy train. The word thrifty means to be sparing or creatively reuse what you have, not to take from someone else and certainly not as a bribe to make friends.”

“Ohhh,” Daniel says with a long pause as his once firm hold on his paper in two hands now is let loose to float carelessly to his desk. Daniel sits on his hands and looks away, a downfall of shame overtakes him. I feel I also have let him down as a teacher. I crouch by his desk and whisper softly, “Daniel, it is ok. What did you do?”

“I took my dad’s gold watch and gave it to the boys in the ally. I was trying to make friends like Marco.”

“I wasn’t stealing; I was thrifting, Mr. Henderson. Taking something for someone else to make friends.” Oh God, this is going to come back on me. Forget lesson planning; I would have to call Daniel’s dad to explain the situation. Hopefully, the gold watch would turn out to not be a Rolex but a Folex.

Lunch time arrives, and I escort the class to the cafeteria. I take Daniel into the conference room to call Daniel’s dad in private. Calling dad was going to be different than usual. Instead of the typical scenario where I either call to give a positive or scolding performance review of my pupils, I might be facing no video games or TV for weeks alongside Daniel depending on how Mr. MaFarland reacts. He might ground us both.

I cough a few times and pick up the phone cautiously planning my excuse. Daniel stands next to the phone thinking about how he is going to phrase the incident to blame the teacher. We are no longer teacher and student; we are brothers confessing to a parent. The dial tone lingers and I re-think this conversation. I hang up the phone, and I cough again so that Daniel will look in my direction.

“Daniel, this could go one of two ways. A: you could tell you dad you thought the story was about stealing toys or watches to make friends. This would get us both in trouble because your dad would think the public education system has let him down. Since he will believe stealing is a moral value we teach in public school. Thus, he will also be disappointed in you and his parenting for you not having the common sense to not steal from your own family. Or we could do B, admit that all you really wanted was friends and Mr. Henderson will confess he did not do a superb job of explaining what thrifty meant as long as you acknowledge to your dad that you did not ask me any follow up questions to the definition of our vocabulary.”

After my exasperated explanation of the plan, Daniel sits down to think. Should I defend my teacher or should I save my own skin? Daniel can’t seem to deliberate the outcome so I give one more comment.

“Do you really want to go through life making excuses, or we can confess our errors as a team to stand together? I promise you, Daniel, I will check to make sure you understand the assignments before you leave school.”

“Ok, we will do B. I am afraid I will get grounded.” He says shaking his right leg anxiously while looking at the floor.

“I am afraid your dad is going to ground me, too.” Daniel gives me a big grin as I steadily pick up the phone. I ask Daniel to dial his dad’s number.

To sum up the conversation with Mr. Macfarland it went something like this, “What! This is what your teaching in school. Did any of the other kids steal because of you.” Add in a little shame, “Did you go to school to be a teacher Mr. Henderson? Whatever, how are you two going to pay for my watch.” Alas, I was spoken to as a child by a parent. Oh the joy, not only am I shamed but I have to come up $200 dollars because I did not ask a freakin’ CFU question!

We learn that is was not a Rolex but a really expensive 14k gold watch. Mr. MacFarland listens patiently to his son relay his message that all he really wanted was friends and that he was confused about being thrifty. Daniel apologies profusely and Mr. MacFarland asks to speak to me in private.

Mr. MacFarland was upset, but the phone call ended with a joke. His last comment will always stick with me, “I appreciate all you do for my son, but if I could give away gold watches, I would send my child to private school.” My administrator was not impressed with my vocabulary lessons and I forever learned to put check for understanding questions in my lesson plans.

The real key in using Checks For Understanding activities is making sure students have fluently mastered a prior skill before moving on. Think of learning as a foundation. If the foundation is not solid, the whole building will collapse. CFU questions are your lessons’ building inspector!

You can find out more about Dan’s book at That’s Special: A Survival Guide To Teaching or go on Dan’s website on thatspecial.co; How I Use ‘Check For Understanding’ Questions In My Teaching; image attribution flickr user lumensadpenal