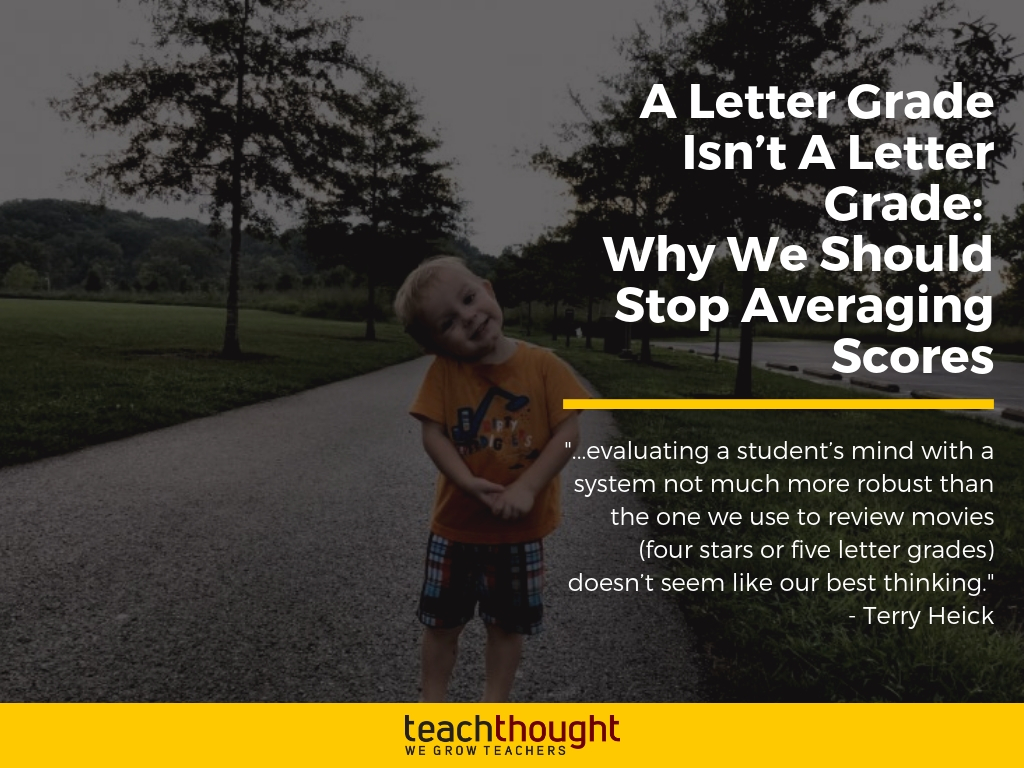 This makes itemized and clearly linear delineations of an argument both useful and easy to follow, and from time to time I’ve found them useful myself to clarify my own thinking—its sources, flaws, and related ideas that suggest further thinking and analysis.

1. A letter grade should be clear in what it communicates.

2. If you want to communicate an overall level of performance over a period of time or number of attempts, an average is useful.

3. If you want to communicate trends, patterns, and potential, an average is a pretty bad way to do that.

4. As it stands, most parents and students misunderstand what exactly what letter grades are communicating or symbolizing. This suggests alternatives to letter grades, including visual and real-time data, but education just isn’t there yet.

Put another way, standards-based grading and reporting draw a more clear and more direct line between what was learned and how ‘well’ the teacher thought the student learned it. Though an imperfect process full of its own problems, this at least removes a lot of slack from the grading process.

6. Though an (apparent) improvement, this still isn’t good enough. Ideally, there is a taut and direct relationship between the goal of the thing and how the thing is being evaluated. In education, for example, there would be a very obvious connection between what the student should be doing and how well they are doing it, and then a very clear path forward based on what that evaluation revealed.

7. Instead, we organize knowledge into content areas, create academic standards for those content areas and curriculum maps for those academic standards, then pacing guides for the curriculum maps, and then units for the pacing guides, lessons for the units, and activities for the lessons—and in a final act of absurdity ‘grade’ (and there are countless ways to grade a thing) some or all or none of this, and then use rubrics for some of the things and not others.

8. These rubrics are often created with language and priorities and tone and purpose entirely distinct from the standards, maps, pacing guides, units, lessons, and activities, often stuffed with elements of procuredal knowledge or vague language meant to help the student but—again—only loosely tied to all the other elements teaching and learning.

9. We then ‘grade’ students (rubric or not) on (some of) this, add it all up, then divide it by the number of performances, attempts or ‘academic acts’ that were ‘graded’ and summon a letter (in traditional grading) or number (in most standards-based reporting systems) to reflect an ‘average’ performance.

10. Above, I suggested that a letter grade should be clear in exactly what it’s communicating. If our goal is to communicate a symbol that more or less reflects a general sense of performance over a 9-week period, for example, then a letter grade or number is fine.

But why on earth would this be our goal?

Assigning an overall numeric score for the financial strength of a publicly-traded company or athletic performance on a video game makes sense. But evaluating a student’s mind with a system not much more robust than the one we use to review movies (four stars or five letter grades) doesn’t seem like our best thinking.

What if we instead communicated:

—a student’s authentic potential based on what they did ‘well’—and maybe compelling (to the student) possible applications of that ‘thing’ they did well (knowledge, skill, competency, etc.)

—a general trend over a given time-period. This could be something simple like a line chart.

—a time-based level of performance—month over month, this period last year versus this period this year, etc. This could be communicated through different-colored bar graphs.

—the number of times a student’s performance dipped and then recovered—and how strong and enduring those recoveries were.

None of these are especially good ideas, but the point here isn’t to brainstorm an entirely new system of grading and evaluation. What I’m suggesting is that averaging scores over a period of time is misleading and hurtful fo everyone involved.

And unlike the really good thinking I’d prefer to be talking about that’s more complex and Terry Heickish, these are accessible. Simple. Not difficult to understand or communicate to stakeholders. Whatever we do, adding up all of the ‘scores’ and dividing them to create an ‘average score’ seems like a bad idea—and that’s fine, as long as parents and students understand exactly what that ‘grade’ reflects.

And all of the troubling subjectivities that were used to produce it.