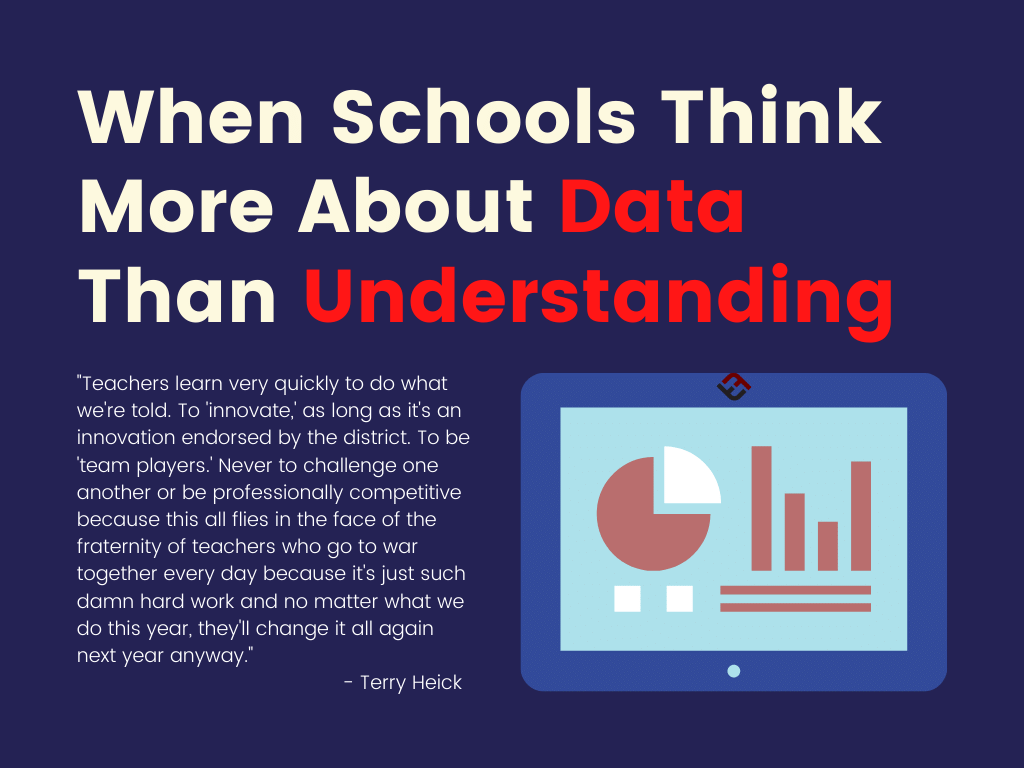 Ed note: I wrote this post in 2013 and updated it again in 2020 for formatting, clarity, and updated links.

Two of education’s most powerful advocates–the late Grant Wiggins and the sage Diane Ravitch–have both recently (edit: in 2013) addressed an important and lingering issue in education: the mediocre state of learning in our nation’s schools.

Wiggins wrote a response to Ravitch you can see here. In short, Ravitch looks to poverty and socioeconomic concerns as what ails ‘schools,’ while Wiggins calls on teachers to refine their craft. Well, it’s more complicated than that really. You can see for yourself in the link above.

Either way, to some, Wiggins’ perspective sounds like he’s ‘judging teachers,’ while Ravitch comes to their defense, a seemingly binary condition.

So let’s start there, with the idea ‘judging teachers.’

As a teacher, it’s difficult not to ‘judge’ if you’re deeply involved with colleagues, in their rooms, and working with them on committees. I don’t mean outright finger-wagging and condemnation, but at least a passing curiosity in understanding the craft of your colleagues. Not judgment in the traditional terms, but certainly a kind of interdependence. An internal instinct about the levels of learning going on in the classrooms around you.

Even in this very humble and collegial form, this is not a popular idea. Asking about the learning models, instructional strategies, curriculum mapping, or assessment forms other teachers are using must be done with great care and tact. This is not a matter of one teacher judging another, but the reality that no one knows a teacher better than another teacher.

You notice what your colleagues leave on the copy machine.

That doesn’t mean that you know a thing about the actual learning that occurs in another classroom. And who has time to think any further beyond that passing curiosity? There’s always your own students and planning and instructional design to worry about. But those artifacts from the copy machine–they mean something.

Or the student work you see hanging on the hallway walls and bulletin boards.

Or the school-wide focus that gives lip-service to rigor, personalized learning, and understanding, but in function stresses compliance, adherence to ‘non-negotiables,’ and uniformity.

‘Team players’ are favored over new thinking, innovation, or questioning of the status quo, and this seems to bother no one–likely because they’re too busy gathering data for data-team meetings, leading yet another committee, or charting literacy probe numbers in all of their free time.

You can guess the kind of learning performance and innovation this ecology leads to.

The end result of this don’t-rock-the-boat approach mixed with the pressure of running this machine of a school is what seems to be very little widespread concern with understanding, powerful literacy skills, and the thinking habits of students. The concept of deep learning takes a back seat to blending in, meeting ‘expectations,’ and a relentless social etiquette.

I recall a meeting, where we, as a staff, were confronted with open-response data that didn’t jive with what multiple-choice questions suggested. The ORQ scores were low, while the MC data were a bit higher. So the meeting, of course, focused on ‘answering strategies’ to help the students form their responses more neatly. SRE–State, Reason, Explain, for example. Or SPAM. Or RAFT.

In the midst of the assistant principal surveying the crowd for which ‘strategy’ we should use and why I suggested that perhaps the data was lower for the ORQs because the students simply didn’t understand well enough. Writing, in general, allows for assessment of higher-level thinking skills compared to MC questions. They do well on MC questions because they kinda-sorta understand, but flounder on ORQs because they hit their ceiling. Plus writing is hard, painstaking work and is a skill and takes years and years to master.

The meeting got a bit quiet, no one responded, and the conversation quickly moved back to ‘ORQ strategies,’ which is like outlining a ‘plating strategy’ in a restaurant without concern for the food.

But even this isn’t ‘bad teaching’ as much as a system not designed for performance, but form. As teachers, we often reach for quick-fixes because of the intense pressure to move the needle. You’d think this would lead to closer attention to concepts like self-direction and transfer, and priority of ideas in curriculum, but it doesn’t.

Teachers learn very quickly to do what we’re told. To ‘innovate,’ as long as it’s an innovation endorsed by the district. To be ‘team players.’ Never to challenge one another or be professionally competitive because this all flies in the face of the fraternity of teachers who go to war together every day because it’s just such damn hard work and no matter what we do this year, they’ll change it all again next year anyway.

But shouldn’t we push each other as professionals to be better? Why is it arrogant if you think read-the-book-and-answer-the-same-questions-you’ve-used-for-years isn’t exactly progressive teaching? Especially when you’re asked to use a common assessment with this approach? Or worse, to ‘share units’?

Can’t we show our love and respect for one another by demanding more, not immunity? Through diversity, not uniformity? Is this ‘judging’?

So Wiggins, of course, has a point.

Teaching Matters. So Does Poverty

If we can agree that all of us, from top to bottom, need to step up our game, does that mean that socioeconomic concerns don’t matter?

This is an interesting debate because it suggests that either issues like poverty and early literacy matter or don’t. If you mention it, it sounds like you’re making excuses and saying those that are poor can’t learn. This empowers the ambitious among us to point to 80/80/80 schools and say anything is possible and why aren’t we doing what they’re doing and come on let’s meet the needs of these kids! All of which fails to honor the complexity and unique conditions of every student, school, and community.

My opinion is that factors like poverty matter, and greatly. It’s not an excuse or insurmountable, but it’s not as simple as a well-timed instructional strategy, a federal grant, backward mapping, or buying a program to make things right.

At one point as a teacher, I went from one school where most students read at home, had literacy modeled for them since birth, and would do almost anything I asked to another school the next year where students–not one, but a half-dozen or more–were living out of their car. Many were also recent victims of sexual abuse, sold drugs on school property, and fought daily in the hallways. In groups. For fun.

That’s not a curriculum or instructional design matter–not initially anyway. That is a culture–one owned by the community, not the school. And there are teachers that deal with that every single day and have for years, and then are told they’re just not working smart enough or hard enough. That if they choose the right ‘research-based strategy’ or taught a scripted curriculum with ‘fidelity,’ that the knot will become untangled, and that’s simply not true.

Scripted curriculum is the death knell of education, and it’s way, way more complicated than that. It’s true that as teachers we must improve. Many of our habits are bad, Our instructional models are dated. Our technology is old. Many of us show, at best, content or pedagogical expertise, but rarely both.

There are many of you that read the previous sentence shaking your head wondering who I think I am to judge other teachers. And that’s a big part of the problem.

But it’s not the problem itself.

Poverty is a killer. Homelessness is a killer. Abuse is a killer. Drugs are as well. Alcohol, too (see the Definition of Alcoholism). And broken families. These things don’t just ‘sabotage your data’ or present themselves as problem-solving scenarios for education committees, but impact students more than anything you’ll ever teach them.

And to continue to teach ‘around them’ as if they are mere side-stories for you to pedagogically form a response to may do more harm than good.

Education suffers from a bit of blindness courtesy of its own ambition to fix everything on its own. But until we can talk about the larger–and more relevant–context that schools reside in, and see schools as parts of a larger whole, we will continue to burn through great teachers at alarming rates while soundlessly teaching to an increasingly disengaged generation of students who literally have access to all the information in the world on their phones.

Teaching is a complex soup of culture, pedagogy, and educational leadership at admin and teacher level. Not to mention almost entirely a matter of literacy at its core. If it was as simple as a program or instructional design matter, the Rubix cube would’ve been solved already.

There may indeed be schools that ‘are doing it’–moving the needle strongly in lieu of extraordinary social circumstances, but there is–or seems to be–a disconnect between what Wiggins and Hattie and Marzano say, and the reality of the students in front of a teacher in many schools, something Ravitch seems to recognize.

Teaching is easy. Teaching well is very, very hard to do day in and day out, especially in the schools that need it most.

This suggests a far more collective and unified approach to education reform than we’ve ever had–one that absolutely demands extraordinary leadership, and that finally honors the true complexity of deep learning, as well the quickly changing logistics of educating a human being in a connected world.