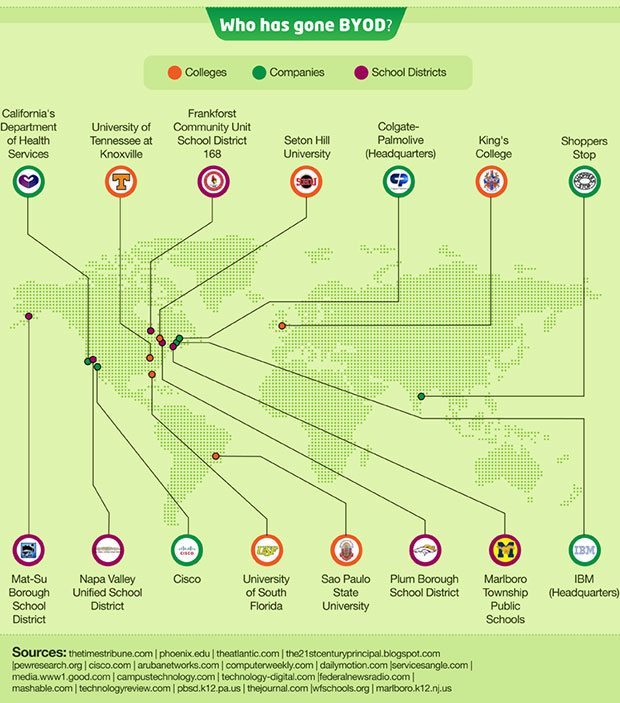 With budgets tight, many schools are hoping to bring technology into the classroom without having to shell out for a device for each student. A solution for many has been to make classes BYOD (short for ‘bring your own device’), which allows students to bring laptops, tablets, and smartphones from home and to use them in the classroom and share them with other students. It’s a promising idea, especially for schools that don’t have big tech budgets, but it has met with some criticism from those who don’t think that it’s a viable long-term or truly budget-conscious decision. Whether that’s the case is yet to be seen, but these stories of schools that have tried out BYOD programs seem to be largely positive, allowing educators and students to embrace technology in learning regardless of the limited resources they may have at hand.

This Florida college prep recently expanded its BYOD pilot program to include sixth through 12th grades. The school’s teachers have all expressed enthusiasm about how BYOD can enhance student learning, but each teacher has his or her own ways of using the devices in the classroom. Some teachers were using the tech for polling, some were looking up visuals or art techniques, others even taking pictures of assignments and notes on the board instead of writing them down, and still others using e-books to look up information. No matter how teachers were using the devices, the response has been largely positive, both from teachers and students. What can Holy Trinity teach us? That when it comes to BYOD, it pays not to be overly strict with how the devices can be used in the class, as greater freedom allows teachers to work with students to develop the best uses for technology for their subject matter and teaching style.

In recent years, Forsyth County Schools in Georgia have created an acceptable use policy, beefed up their infrastructure, and developed a pilot BYOD program that will soon roll out to all of the schools in the county. Yet Forsyth did one thing differently: they let each school determine individual rules about how and when BYOD tools will be used. As a result, the program isn’t the same for all schools, with students able to bring their devices to school at all Forsyth County schools but only allowed to use them in the classroom in 10 of the schools. The district has found that increasing technology in the classroom has come with some unexpected strings attached and has also necessitated the training and hiring of teachers who are willing to play the role of facilitator, letting students lead their learning. Administrators at the school say that it’s been a challenge to get all teachers on board but that they’re working hard to help them learn new ways of interacting with their students. The Forsyth pilot program illuminates both some of the pros and the cons of BYOD programs. BYOD requires much more than just changing tech policies and can sometimes mean overhauling the curriculum and spending money training teachers, though it does help students create a more personal and memorable learning experience.

Cash-strapped MPSS in Minnesota joined the Bring Your Own Technology movement in 2011 as a way to bring new educational tech into the classroom without having to radically change their budget, something that the school didn’t really have the means to do. Director of media and technology Doug Johnson literally wrote the book on bringing technology into the classroom (it’s called The Classroom Teacher’s Technology Survival Guide) and he thinks that the program has been working great so far, allowing the school to free up resources for other things and to provide technology for kids who don’t already have access. At Mankato, the BYOD program relies heavily on Google Docs and other tools that aren’t platform-specific and that serve information to any Internet-accessible device, which points to one of the biggest problems with BYOD: managing a variety of different tech platforms. It can make things tricky, but not impossible, and Johnson believes that with the right infrastructure and bandwidth in place, students need little support to get up and running.

When Allen Independent School District in Texas wanted to move its schools into the 21st century, it decided that one great way to do so without breaking the budget was by allowing students and teachers to bring their own tech tools into the classroom. Currently, just high school students are allowed the privilege, but others may soon be allowed to bring their own laptops and mobile devices as well. The school district has clearly defined their goals for the program and limited the freedom and range of devices in the classroom as well through an acceptable use policy. Students can only use devices during times that are approved by teachers and cannot use class time to troubleshoot tech problems. While the AISD program has been largely successful it does demonstrate that some of the problems that can arise with BYOD policies. Students can access restricted materials through a 3G plan, technology can cause distraction in the classroom, especially when it’s not working, and the IT required to support such a wide range of devices comes with a significant price tag.

Oak Hills Local School District in Ohio has rolled out a BYOD program that permits both students and staff to bring in their own devices. The school jumped on the BYOD bandwagon because they believe using technology in the classroom will help to prepare students for work in the 21st-century world. Before rolling out their program, OHLSD created a strict acceptable use policy, though what students can do is addressed just as much as what they can’t do. The school has shared articles documenting every part of the process of creating a BYOD plan on their blog, teaching others who are interested in the process how to do everything from build a portal to develop a physical infrastructure and staff that can support these devices. In addition, they’ve been carefully monitoring how the system is being used, finding that Android devices are used the most, followed by iPods, iPhones, and iPads. One of the coolest aspects of the OHLSD program? The school also built a virtual desktop system that can be accessed through any device students or teachers bring into school. So far, the virtual desktop and the BYOD program has saved them $1.27 million. The lesson here? BYOD programs are not only great ways to bring tech into the classroom, they can also save millions that can be used for other essential school programs and services.

Administrators at Hopewell Valley in New Jersey decided to stop trying to battle cell phone use at school and instead decided to integrate the phones into lesson plans for eighth-graders and high school students. Teachers and administrators have come up with some creative and fun ways to use the phones, from staging quiz shows to allowing shy students to ask questions. The move was both a cost-saving measure and a way to allow more flexibility for learning in the classroom. Administrators at the school acknowledge that students will likely use the phones for non-academic purposes at times, but the school doesn’t want to dwell on potential negatives, instead focusing on the amazing educational opportunities they can offer. Students are excited and, surprisingly, so are teachers, who are 80% in favor of the new tech policy. HVRSD teaches us that while cell phones can have drawbacks in the classroom, they can also be an asset, and even teachers can get excited to see them out and being used.

Cell phones had long been a classroom disrupter at Texas’ Katy Independent School District, but the school decided to change that, starting its own phone-based pilot program in 2009. The school handed out 125 HTC smartphones to fifth-graders at a single school that year, making a few major changes. The phones had no calling or texting features and were referred to by the school as ‘mobile learning devices.’ Teachers reported that students were immediately more engaged and pulled into learning, whether they were taking notes, putting together presentations, even charting the stars. The school hasn’t tried to push the devices onto teachers who weren’t ready to try them out, but they have expanded the program. They’ve added more phones, upgraded the infrastructure, and just this year, allowed students to bring their own tech into the classroom. The results have been amazing. Not only are kids more interested in learning, but their test scores are also up, especially in math. The experiment with BYOD at KISD demonstrates that while technology can be a distraction, it can also be an amazing learning tool that can not only interest students but also help them to become higher achievers.

Students at New Jersey’s MARSD are allowed to bring in any mobile device they own, whether laptops, smartphones, or tablets. Teachers are reporting that students had an instant change in engagement, becoming more actively involved and working better together than before the program. The school has so far tried to create an environment that’s supportive of students and teachers, focusing on the fun and innovative ways the technology can be used rather than the potential pitfalls it might have. Administrators have said that their success relies heavily on staff training, strong infrastructure, and trust of students and teachers. So far, the results have been great, and some schools in this district have even added Nooks to the library that students can check out, loaded up with ebooks and other reading material. The key at these schools? Treating teachers and students with respect, extending trust, and being willing to embrace technology without many of the standard reservations.

Middletown Township Public Schools in New Jersey have recently rolled out a BYOD program. Instead of just laying out the rules and expecting students to follow them, the school district encourages students to take the lead, inviting them to make videos that demonstrate acceptable and unacceptable use of personal phones and computers. Middletown is also home to some seriously cool applications of mobile technology in the classroom as well through their BYOD program. Each year, students can take part in the Middletown Elementary Tech Challenge, which showcases projects that were produced using tech devices in the classroom. There’s also the Expo at Middletown High School, where more than 85 elementary through high school students teach technology classes and showcase technology applications to parents and community members. These innovative ideas are perhaps the best takeaways from the MTPS program, demonstrating that BYOD programs offer much more than a chance to use tech in the classroom- they teach real-world skills, too.

The BYOD program at Escambia has been lauded for how it emphasizes Children’s Internet Protection Act (CIPA) compliance through its carefully worded acceptable use policy. As part of this, administrators in the district have established a ‘guest path’ on the network to avoid students encountering sensitive data and to keep them safe. Booker T. Washington High School, a school within the Escambia district in Florida, has a new pilot program this year that opens up BYOD for ninth through 12th grade. The school is hoping that the added technology can be easily integrated into the curriculum and that it will be easier for students to access information that they can then apply to solve problems in the classroom. Because the district believes that BYOD programs can be confusing, they held a forum for parents before this past school year so that parents could ask and get answers to any questions they might have. While it’s too early to determine if the BYOD program at Escambia schools will be successful, they’re setting an amazing example by working hard to keep students safe and on task and involving parents in the process.