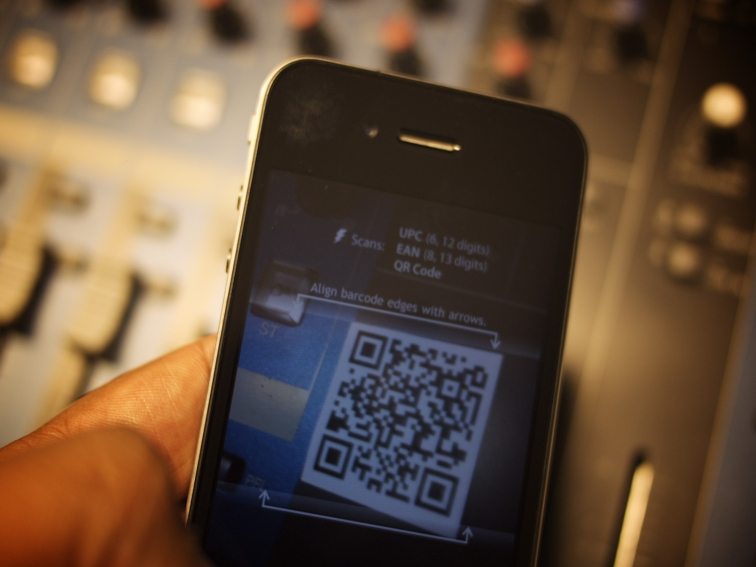 Quick Response codes, popularly known as QR codes, are popping up everywhere from the center of Iron Man’s suit to bottles of wine. Basically a barcode, when scanned, QR codes link to something on the web, from ads to videos and music to surveys. Despite the fact that many young people currently say they’re not likely to scan the codes, colleges are slowly pressing ahead with bringing the tech to their campuses in the hopes of bringing students around.

Washington and Lee University took the words right out of student employees’ mouths. Members of IT Services donned t-shirts imprinted with nine QR codes on the front that when scanned led to web pages with helpful information on things like passwords, Sakai, and how to contact the help desk. On the back were codes for getting around campus and town. Makes sense; have you ever tried to talk to an IT person?

In 2010, the University of Arkansas included QRs in its magazine Research Frontiers. The codes allowed readers access to educational videos and slide shows like art professor Kristin Musgnug’s “Un-Natural Histories – Paintings of Invasive Species.” This could be one of the most promising uses of QR codes, as it significantly bridges the gap between print and digital media.

Instead of just promoting themselves, schools like Abilene Christian University are using QRs to help students connect with each other. ACU’s getGO app reads codes and lets students send texts and emails, add contacts and calendar events, and find places on a map.

Instead of following the trend of college recruiting posters placed in high schools that feature an inviting picture of a school’s campus, New York’s Hamilton College changed the game by making their poster simply a giant QR code with the word “Hamilton” underneath. The code links to a web page of not one but 11 photos of life on Hamilton’s lovely campus. It seems to be hitting its target audience: adults are confused while teens are scanning away.

Often students and faculty members can forget (or were never told) about the history behind buildings, statues, or memorials on their campus. Schools like Johnson County Community College affix QRs to these structures in a practice called “mobile tagging” to allow curious passers-by to scan and be enlightened.

The University of Bristol in the U.K. recently ran a six-week ad on a billboard using QR technology to direct commuters at London Paddington Station to a VIP section of its website. What made the ad especially interesting was the shape of the QR code. Instead of the usual Rorschach-esque black box, the code was designed in red in the shape of the Clifton Suspension Bridge that links Bristol to nearby Clifton.

Of course, colleges are using QR codes to drum up hits on their Facebook pages, Twitter accounts, YouTube channels, blogs, home pages, and more. The University of Alaska Anchorage is one such school, which also invites students to create their own codes using the same software the school uses.

Hey, libraries are cool. If you didn’t have them, you’d have to tell your parents you’re actually going to the bar every night. Miami University is using QRs in several different ways. Codes on the inside cover of books work like Pandora for literature, directing you to other works by the author and similar books on the subject. Codes on the walls provide help for using computers and other instructions. And QRs on the library website help you locate the book on the shelves so you don’t have to jot it down.

QR codes are the latest update to the formerly dry world of business cards. The Chronicle of Higher Education reported that faculty at schools like Michigan Technological University, Oklahoma’s Rogers State University, and Coker College in South Carolina have started adding QRs to their calling cards, enabling instant storage of contact details in the receiver’s smartphone.

During a construction project on its College Center, Pennsylvania’s Lebanon Valley College put up banners with QR codes on them to give students instant updates on dining, parking, and construction schedule information. An official there said the school appreciates the technology for giving easy access to hard-to-remember info and that there are hopes to use QRs for conveying scheduling info throughout the campus.

Lafayette College turned to QRs to make touring a library the least painful as possible. It tapped a TV show from freshmen’s childhoods with Where in the Library is Carmen San Diego?, in which students are tasked with solving the case of the missing sword of the Marquis de Lafayette. Codes scattered around the library assisted them on their chase and led them to each station where a librarian informed them on using the facilities.

At least one school is committing to QR codes as a part of its decor for at least the near future. Instead of the usual paper posters or plastic decals, Texas Tech’s Rawls College of Business has been outfitted with glass and metal plaques featuring QR codes that connect to building info and history, department websites, and floor maps.

The University of Guelph in Ontario is one of several schools using QR codes in their marketing materials that are sent to high school students. U of G used the codes to link to videos of students discussing their positive experiences at the school. Once a student is accepted, he or she receives a package with codes linking to a welcome video from the president and video tours of campus.

In a similar way to Lafayette’s game, officials at the University of Northern Iowa’s University Museum used QR codes to create a scavenger hunt for patrons to find additional photos and information about pieces in the exhibit, including how they came to be housed there. The event was part of the “120 Years of Discovery, Learning & Inspiration” exhibit before the museum closed its doors to the public.

Giving away free swag to fans who prove their loyalty by coming to lots of a school’s sporting events is nothing new, but now colleges like King’s College in New York are harnessing the power of QR codes to make the process easier for fans. They can scan the codes to unlock coupons for tickets to sporting events and check in at games to receive sporting goods and other rewards.

In an effort to help students improve their eating habits, the dining services department at North Carolina State University offers scannable QR codes at check-out points to allow students to see nutritional information on their food, see updates on new menu items, and request their feedback on new grub.

Western Kentucky University is not a Bible college, but it is one school with a strong percentage of Christian faculty members looking to share that faith with students. The group has taken to the school paper to take out an ad with a QR code forming a package under a Christmas tree. When scanned, the package directed spiritually hungry students to a website called whoisjesus-really.com.

OK, technically this one was by a college student and not a college itself, but it’s just too good not to mention. While many graduates touch up their graduation caps with decorations or writing, Amanda Jonovski of Notre Dame used it for a much more practical purpose. Accompanying the words” HIRE ME” was a big QR code with her contact info.

This is a cross-post from content partners at onlinecolleges.net