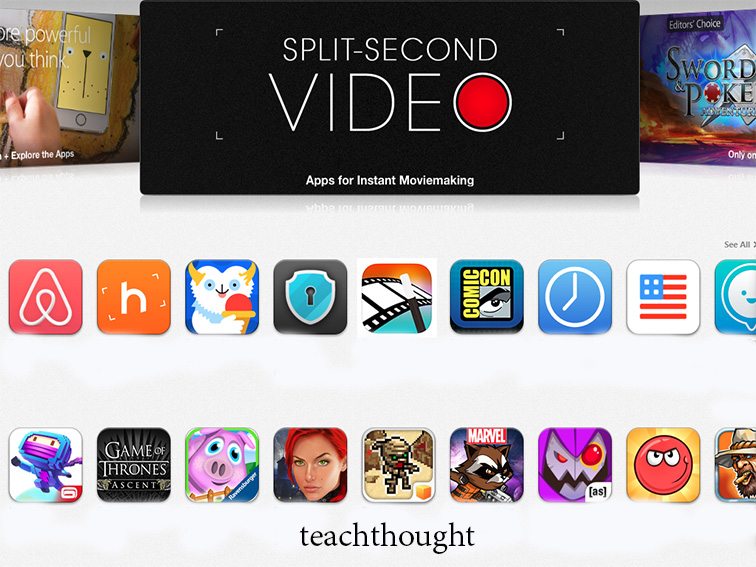 22 Of The Best Apps To Make Videos In The Classroom

In education, perhaps one of the least utilized talents of iOS hardware is creating exceptional video.

While it’s not uncommon for teachers and students to use iPads to create videos, creating stunning videos that are compelling, well-produced, innovative, truly social, and/or something worth sharing with the world isn’t so easy.

Below are 22 apps we’ve handpicked as powerful teaching and learning tools to work with digital media in your classroom. Like almost anything, these are more potent in the hands of students than teachers, so start there and work backward–audience and purpose: What’s possible? What needs communicating through video, and who needs to hear/see it?

How can I help students turn these iPads into tools for magnificent creation?

The director can have help from Shot Designer by creating full diagrams while working.

With iMovie you can create beautiful stories using your favorite videos and images from your library.

Easily create videos with text and special effects. Record your own videos or pick from templates.

Create custom videos that are easy to share with photos, voice-overs, or your favorite music. Special effects are available to make your video have a personality.

McLaren’s helps you animate your own video with paper cutouts to bring your imagination to life.

Learn how to light and set up your green screen easily with Green Screener.

Spark Camera makes it easier than ever to capture a weekend, a vacation, or anything that makes your life light up.

Quick and simple edits are easy to make and share instantly with Magisto.

Loopideo is an app designed to play video in a constant loop.

CinesoundFX lets you choose between four different effects and sounds to apply to your videos, photos, and sounds.

ProCam Fx is a great photo editor for both beginners and professionals.

Caption photos and make fun videos with them adding fun styles and music.

With Filmmaker Pro, in addition to genre-standard features like splicing, themes, and music, you can also import clips and music from external sources like Microsoft Onedrive.

Another useful video editor for the classroom that allows for the easy addition of subtitles, watermarks, transitions, and even split screens/backgrounds.

TiltShift Video gives you all the editing features you need to turn your videos and photos into awesome tilt-shift creations.

Create videos using TouchCast for a TV studio experience on the go.

Turn your videos and photos into stop-motion videos.

Video Mixer Pro allows you to combine multiple videos into one. Add special effects and share easily on any platform.

Throw some big-budget film effects in your videos.

Horizon allows you to not only edit your videos but film your videos in multiple modes and angles.