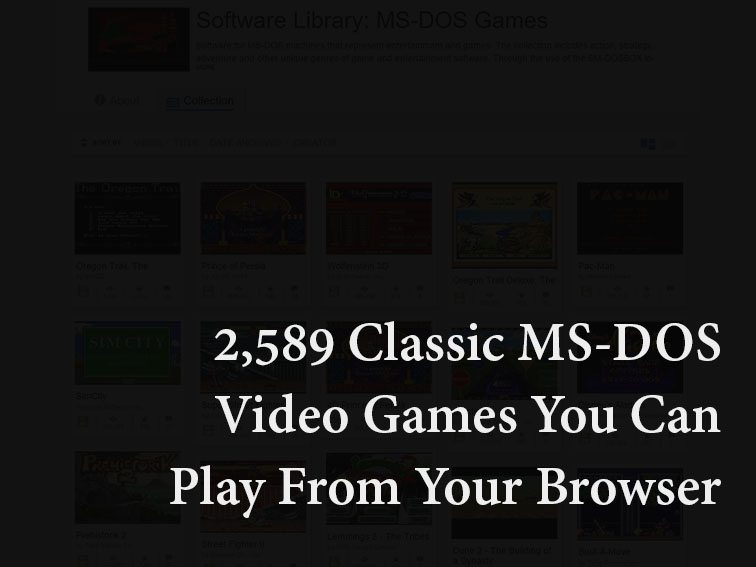 2,589 Classic MS-DOS Video Games You Can Play From Your Browser

If you’re of the correct vintage, you probably remember a game called Oregon Trail. It was a video game that let you drown, starve to death, and suffer from dysentery while depending on a wagon with wheels apparently made of glass. It made Social Studies teachers feel good about video games (how could it not?), and instantly became a kind of early icon for what could be considered a learning simulation.

Before Windows (and to a degree, Macintosh) became the standard for desktop computer user interfaces, there was DOS and its command line that refused to do anything it wasn’t scripted to do by the user. And before the original Nintendo (released in the United States in 1985), there were MS-DOS Games. Scores of the game of widely varying degrees of quality, tone, and execution. Drug Wars or Donkey Kong, it was all there.

And the MS DOS-game era (as it was) continued for much longer than you might’ve thought. The presciently-named Beneath Apple Manor was published in 1978, but MS-DOS releases within the archive continued until 1999, even as console systems from Sega, Sony, Microsoft, and more found mass appeal. SimCity. Wolfenstein. Paperboy 2, Joust. Ghosts N’ Goblins. Master of Orion. Civil War. Where in the World Is Carmen Sandiego Deluxe?. All available, with scores of others you’ve never heard of.

And all available to play right from a web browser through the miracle of software emulation. This is the Internet Archives collection for MS-DOS video games.

“Software for MS-DOS machines that represent entertainment and games. The collection includes action, strategy, adventure and other unique genres of game and entertainment software. Through the use of the EM-DOSBOX in-browser emulator, these programs are bootable and playable. Please be aware this browser-based emulation is still in beta – contact Jason Scott, Software Curator, if there are issues or questions. Thanks to eXo for contributions and assistance with this archive.”

You can also find a curated version of the same collection–the Showcase–here. For that matter, the idea and execution behind the Internet Archives in general is worth a look.