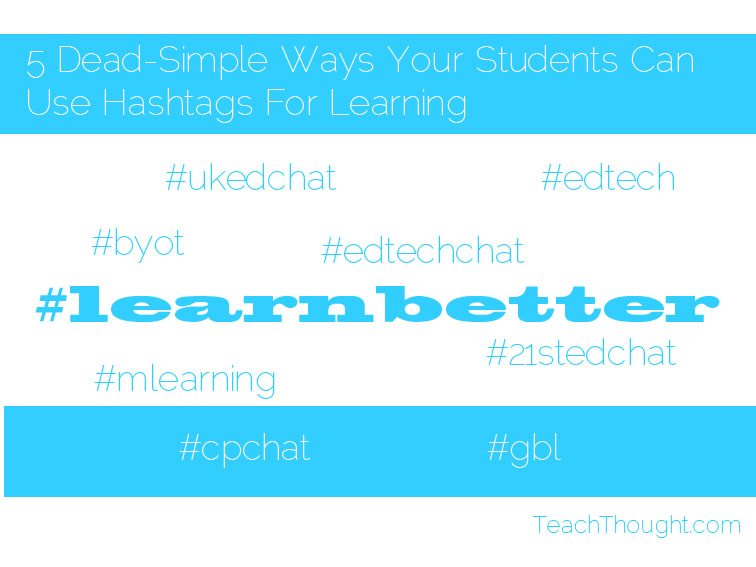 5 Simple Ways To Get Started With Hashtags In The Classroom

Hashtags (those ubiquitous words and phrases that start with the # symbol) are used in social media such as Twitter and Instagram to label and sort tweets, photos and more. Hashtags are social media’s way of organizing photos, ideas, concepts, etc. Think of them as massive file folders, cross referenced with other file folders if more than one hashtag is used.

In education, Twitter and social media in general and hashtags in particular can be a valuable tool for educators, administrators, parents and students to connect with each other and share ideas and discoveries. Here’s how students can get the most out of social media in the classroom by using hashtags.

1. Send and receive general announcements to and from classmates

For effective communication among students regarding general classroom matters, it’s important for users to agree on a classroom-shared hashtag that can be used by all students. Tweets and other social media postings that pertain to the classroom should be accompanied by a hashtag that will be used for all tweets, Instagram posts, etc.

They can be accompanied by other hashtags as well, to further narrow down the subject, but a tag such as #UNREnglish101Hall for an English 101 class taught by Dr. Hall at the University of Nevada-Reno, for example, will enable anyone who clicks on it to see all posts tagged with it. This facilitates connection and discussion between students even when they are not in the classroom. Students can do a hashtag search to make sure their hashtag isn’t already being used by another group.

2. Have a class discussion on a general or specific subject

If students are discussing or sharing information on a specific subject, such as a specific text or lesson from class, the discussion could have the classroom hashtag, along with hashtags that describe the topic. For example, if the class is studying the works of Shakespeare and are currently reading “A Midsummer Night’s Dream,” discussions could be hashtagged with #Shakespeare and #AMidsummerNightsDream.

If students are working on a project in small groups, they can use hashtags to call out important information, direct group members to further research, and communicate within the group. Students can chat with each other in realtime, send out status reports, and more. If the project is ongoing or large in scope, students can set up Twitter accounts specifically for the project and use protected tweets. Protected tweets can only be seen by approved followers and may not be retweeted.

Along with using hashtags to communicate with others, students can search for general and topical hashtags to see what people all over the world are talking about. This can be particularly effective if students have been engaged in class discussion and study of a current event that may be generating a lot of news. Twitter offers a list of trending topics, and Instagram offers an Explore feature where users can see what’s hot at the moment.

5. Connect, share, and gather ideas from a wider audience, including experts

If a student is studying environmental disasters, he can share knowledge he has on the subject, engage others in a discussion, pass information on from another source, or try to learn more about the topic by finding out what other hashtags are being used on the subject. Social media is also a great way for students to follow and connect with experts and thought leaders they may never have the chance to connect with in other circumstances. You might be surprised by some of the high profile people who have responded to tweets from their thousands of followers.

One final word: If you’ve been on Twitter or other social media platforms, you’ve probably seen at least a few tweets that are overwhelmed with hashtags, in many instances because the user is trying to be clever. “Saturday Night Live” even did a skit where the characters talked only in hashtags. When it comes to hashtags, it’s important to remember that more doesn’t mean better. In most cases, two or three hashtags should be sufficient for students to get their message across and find the information they’re looking for.