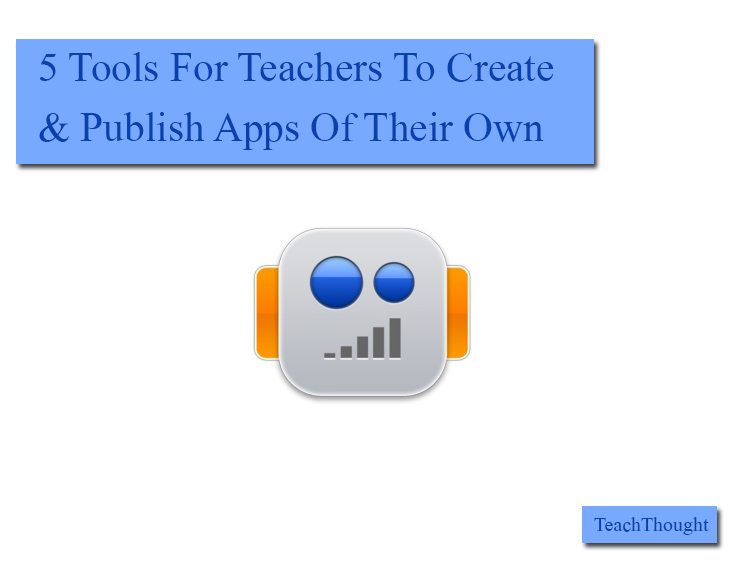 What with the almost universal proliferation of smartphones among students, even at the elementary school level, it would seem like a no-brainer for an educator to utilize mobile apps as effective and readily-accepted learning tools. And if an educator can’t find an app that does exactly what he or she wants, the logical next step is to develop and publish their own. Besides, what else do they have to do with all the free time with which all educators are blessed?

Now that you’ve finished laughing, let’s take a realistic look at how an educator can best go about publishing an app. First of all, it’s probably pretty safe to assume that most educators lack the time, if not the technical knowledge, to develop their own apps, much less to publish them. In fact, the very notion of having to write lines and lines of code would probably send most educators in a frantic dash back to grading their students’ papers. And even if they have the knowledge and time to actually create functional apps, they would also have to find a way to make the app engaging to their students.

And the process of actually publishing the app is a whole ‘nother ball game altogether. For these reasons, this post will focus upon a few tools that prevent the busy educator from having to create the wheel before getting his or her app up and rolling. But please don’t expect this to be a comprehensive list. There are just too many different methods available, The following examples are just to get you started.

For those who lack the time, knowledge, or incentive to write their own code, there are any number of app publishing resources available. The free ones are somewhat limited in the degree to which you can customize the apps you create, or place ads in the apps you create. The free software/service companies offer their paid premium versions for those whose needs aren’t met by the no-cost version. A few examples are given below.

1. App Development Software – Ironically, some of the most highly user-rated software programs are free, either open source or proprietary. One of the most versatile of these is the open source eclipse Classic. This software enables the user to create apps for most major mobile operating systems, including Android, iOS, iPhone, as well as desktop OS’ including Windows, Linux, and Mac. While it does require coding knowledge, it offers a wide range of plugins, as well as the required editor, debugger, and version control.

2. Appmakr – Robust apps for iPhone and Android devices. Even the free version allows you to publish a test app to see your finished product before publishing it in the App Store.

3. Appypie – Highly popular, especially among those who have no interest in writing code. Not only allows you to build your apps, it automatically publishes the completed apps to the appropriate app stores.

4. Appsbar – A free, simple app maker that allows the user to create, publish, and promote your apps, including on social networking sites such as Facebook and Twitter.

5. Appery.io – Cloud-based, with a drag and drop visual editor using a wide array of available components. Though the app is developed in the cloud, the finished apps can also be exported and hosted elsewhere.

Of course, there are many other options, as well as other software and cloud-based services for educators who are comfortable writing their own code and handling the submission process directly through the various app stores, such as Google and Apple’s App Store. The only real limitations upon what you can do are your own level of expertise, how much time you are willing to devote to the process, and what you can spend.

In the end, a well designed and published app can be a useful tool that will go a long way toward engaging your students and inspiring them to learn the skills they will need as they continue their academic and professional careers.

Viviana Woodbury is a freelance writer and blog junkie from Appdeveloper.org. She loves receiving reader feedback, which can be directed to [email protected]; 5 Tools For Teachers To Create And Publish Apps Of Their Own