Choosing The Right Mobile Device For Your Classroom 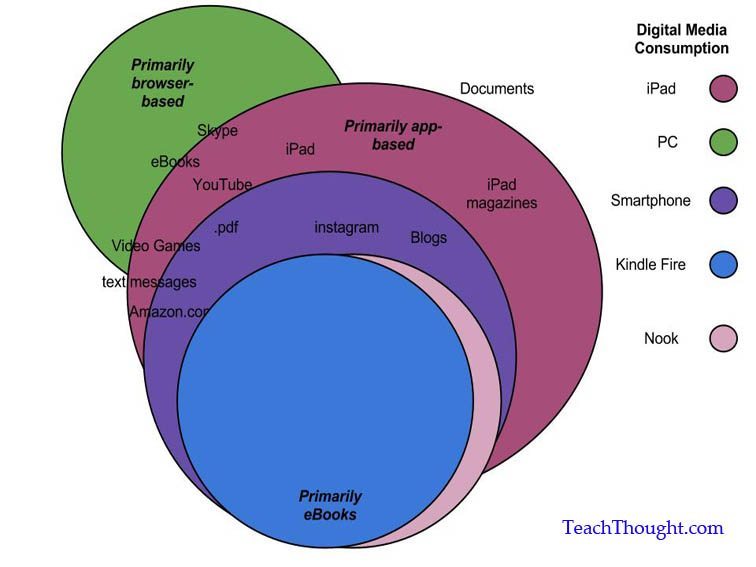 Though we haven’t written about it much just yet, something that’s of enormous interest to us here at TeachThought is media–its creators, forms, themes, design elements, consumption patterns, and ultimate impact on thinking and human behavior.

We put together this chart as a way to visualize the differences in the five most popular media consumption devices and their relative sweet spots, from the iPad and PC to smartphones, Kindles, and Nooks.

As you can see, the upper left area in green is the PC–and really applies to the Mac as well. Here, most of the media consumed is browser-based–no longer dominated by flash, but a handful of apps, and emerging HTML5.

To be fair, some of this is an exercise in semantics. The apps that crowd mobile devices often begin as websites–itself just software displayed through a web browser, yes?

Still, the PC is comparatively limited in terms of pure consumption compared to tablet devices like the iPad and smartphone devices like your average Android smartphone. The simple interactive elements, highly visual user interface, and inherent software designed without a keyboard in mind all contribute to this extraordinary potential for media consumption. (Remember, this Justin Beiber video on YouTube has been played approaching a billion times.)

As the tablet devices continue to evolve, you’ll see a much different diagram. In fact, Windows 8 is the mark of an important transition for Windows as it finally confronts an increasingly mobile landscape. If you haven’t seen what it looks like, check the video below.

Choosing the device that’s right for you is often done based on brand and trend, but should be considered in terms of function first.

What barriers are there to learning that technology can help solve?

Do the barriers involve media consumption or production?

Which device best solves current problems while offering the opportunity to expand as the learning landscape changes over even the relatively short shelf-life of the device?

While not “sexy,” laptops have been the all the rage primarily because of their balance in production and consumption, but as mobile productivity suites improve and peripherals for tablets evolve (the Logitech keyboard case is one example), the need for a pure laptop may dissolve completely.

Choosing The Right Mobile Device For Your Classroom