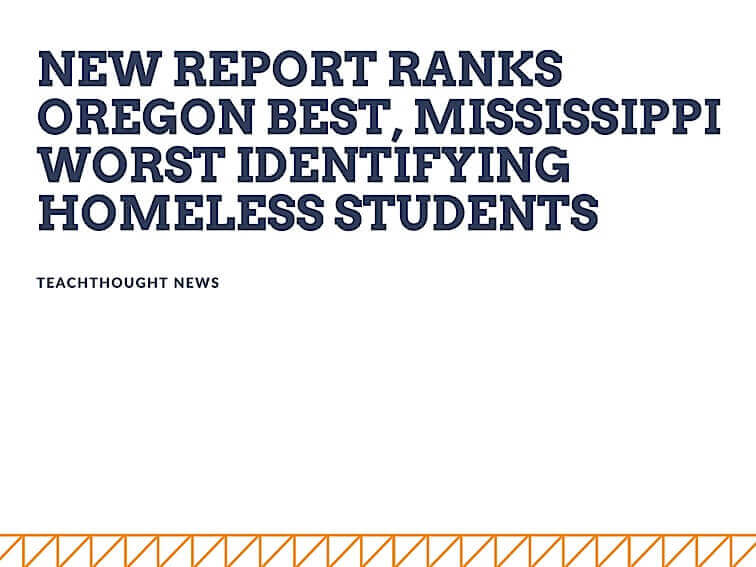 from a press release

A new report released by the Institute of Children, Poverty and Homelessness ranked the fifty states and the District of Columbia by how effectively they identify homeless students within their school systems. Oregon, New York and Alaska were rated at the top; Mississippi, Tennessee and Connecticut scraped the bottom.

ICPH used five criteria to create the rankings: the percentage of children in early Head Start/Head Start who are homeless:

1. homeless children as a percentage of poor children who are enrolled in pre-Kindergarten

2. homeless children as a percentage of extremely poor children in grades Kindergarten-12

3. the percentage of all students identified as homeless and living “doubled up”

4. the percentage of homeless students identified as having a disability.

Student-level work in New York City has shown that many homeless students who have a disability are not identified until well into elementary school—often in third grade as opposed to Kindergarten, the ideal time for disability interventions to begin.

This is not to suggest that more homeless children experience a disability than housed students. Rather, because of the transitory nature of homeless families, children are less likely to receive the kind of specific attention required to properly identify a disability and receive an Individualized Education Program (IEP). This measure can allow states to think about how they might ensure that students are properly referred and evaluated in the midst of experiencing homelessness.

Historically, the United States Department if Education (ED) has been a critical resource in the fight against family homelessness. Although the majority of federal funding and policies related to family homelessness comes from the Department of Housing and Urban Development (HUD), its limited definition of homelessness leads to a significant undercount of families and children without permanent housing of their own.

Only ED counts as homeless those children who are staying temporarily with another family or household due to economic hardship. More than three-quarters of all homeless students live in this kind of unstable arrangement, known as “doubled up.” These students are often the hardest to connect with support services, as they are often unaware of their legal rights under McKinney-Vento or reluctant to self-identify as being homeless.

The report is available for free download at icphusa.org.