The Outernet: One Device, Free Data From Space Forever

While the title may sound like science fiction, it is actually a momentous step towards truly universal education that is already happening.

Currently, Outernet is broadcasting news, ebooks, Wikipedia, and academic articles on four continents. But we can do more. One of the most significant steps we can make in education is by giving people the tools they need to become their own teachers. That is our mantra at Outernet.

These waves are picked up by a receiver – the equivalent of a radio in this analogy – and are turned into files that the receiver stores on its drive. Then, instead of playing music for your ears, the receiver emits a Wi-Fi signal that is heard by a phone, tablet, computer, or any other Wi-Fi capable device. Imagine a FM radio that saves all the songs it receives, but instead of songs it saves news, all of Wikipedia, educational material, disaster alerts, books, and more.

To connect to Outernet, you need a receiver. We publish plans on our website to let anyone build a receiver, which requires a satellite dish to receive our broadcast. However, for the next three days, our first dish-less receiver called “Lantern” has been funded. Lantern has built-in solar panels so that it can work off the grid and it can be used to charge your phone or other device. We raised our goal of $200,000 in just five days and now, and reached our goal of  $500,000 January 11th, 2015. This let us increase our broadcast bandwidth from 2 MB/day to 10 MB/day. Right now these receivers are external, but we have the capability to eventually install an antenna the size of a computer chip into a phone or tablet, giving it built-in free data.

When it comes to education, the application is immediate and powerful. One of the categories of content we have included in our broadcast is teacher training material, currently from Teachers Without Borders (though we welcome other suggestions). For existing teachers, an enormous burden for physical resources is lifted. The cost of a smartphone has dropped dramatically (as low as $25), which can now be a passport to an endless library of humanity’s best content.

For example, we broadcast an offline version of Khan Academy, turning any device into a classroom. But the possibilities of Outernet are truly limitless because a large part of our library is built on user-requests; if there is something you want that is not currently being broadcast by Outernet, reach out to us and we will broadcast it. To go back to the FM analogy, we are democratic DJ’s taking song requests for content. The value of having a library as part of a school is intuitive. Now, that library has been made digital and universally available. 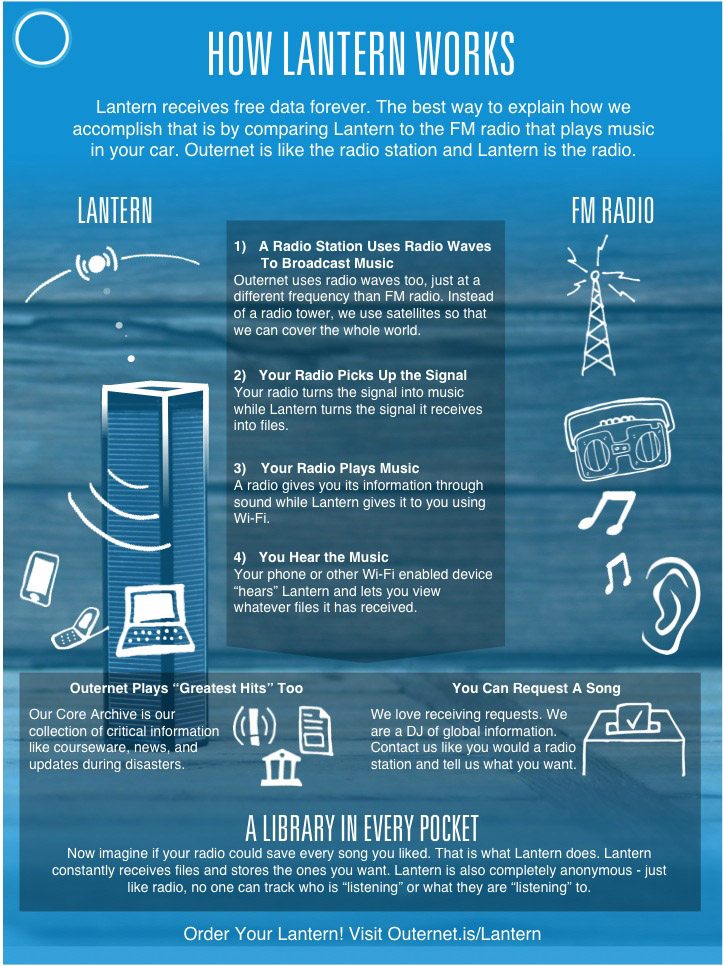 But Outernet goes beyond a purely educational application. Right now, 4.3 billion people on Earth cannot access the Internet. Said another way, two thirds of humanity cannot enter the largest library ever constructed. Think of everything we have accomplished while operating at ⅓ our capacity (or less for most of history). Now think about how much more we could accomplish if every human being on Earth were able to contribute to the global marketplace of ideas. What would we discover? What advances would we make as a species?

Fundamentally, this is the role of teachers. Teachers are the guardians of humanity’s future because it is the teacher’s job to cultivate our most valuable asset: the human mind. One of my favorite examples of Outernet’s potential is Jack Andraka. Andraka used Wikipedia and academic journal articles to develop a brand new early detection method for pancreatic cancer. He was only 17 when he did this. He received nearly 200 rejection emails before a Johns Hopkins researcher responded.

Our conventions for how we access information and how that information manifests itself in advancements needs to be radically altered. If he had not had access to those materials, he would have never made such a discovery. History is replete with stories like this. The sad question we are left to ask is: how many Jack Andrakas have come and gone without ever making their discovery? Fortunately, we can stop this waste of talent forever.

Outernet is a quantum leap for education and, thus, a quantum leap for humanity. I hope you will consider supporting our work and spreading word of Outernet to your colleagues and friends. Help us build this great library in the sky.