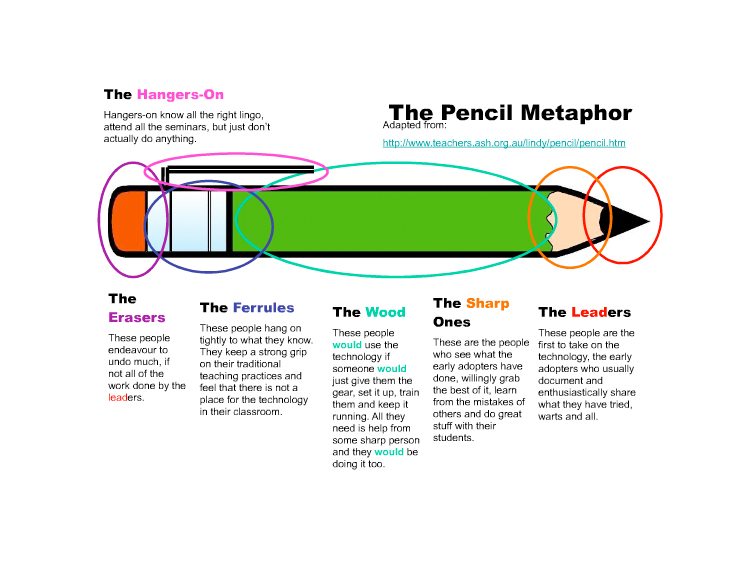 The Backstory of the Pencil Metaphor

If you’re looking for the 6 ways part–well, hold your horses; first, a little backstory.

The pencil metaphor for edtech integration isn’t new. In fact, two years ago, someone else wrote a blog post saying the same thing. Apparently, there is an old Australian education site that first hosted it, but it’s no more. We first saw the image about four months ago, and have been intrigued the way it continues to resurface every dozen weeks or so like a kind of zombie graphic.

Steve Wheeler shared a post about in in January of 2012 as part of a #pencilchat discussion, and there was even an intended PD session in South Africa designed around it in April of 2012. Here’s a slideshare presentation from a university in Malaysia on the idea. But it goes further back than that–at least to 2007, to ISTE 2006 Educator of the Year Linda McKeown.

In fact, here is a 2006 post–going on ten years ago–that mentions it specifically, and also attributes it to McKeown (which itself tries to link back to the now-gone Australian site, which may indeed be the first known mention of this now legendary mythical metaphor).

The Persistence Of The Metaphor

The takeaway for this kind of durability? More than likely, the pencil metaphor persists because of the simultaneous overlap and juxtaposition of pencils, education, and technology. (It’s a neat party trick.) There was also a bit of thinking that went into this–Ferrules? And everyone loves familiar and iconic symbolism.

The for or against education technology argument is an odd sort of argument that some in education have taken up as their niche altogether.

There are also the Luddites, who are wary of any technology at all, and want us to wait a cotton pickin’ minute before we rush into anything foolish.

Which leaves us a tempting segue to say “moderation is everything,” and recommend teachers find a middle ground. But we won’t do that because, well, it’s not that simple. So we’ll just point back to the types of responses the graphic identifies, and leave you to draw your own conclusion. It’s a cool graphic.

These people endeavor to undo much, if not all, of the work done by the leaders.

These people hang on tightly to what they know. They keep a strong grip on their traditional practices, and feel that there is not a place for technology in their classroom.

These people would (get it?) technology if someone would just get them the gear, set it up, train them, and keep it running. All they need is help from some sharp person, and they would be doing it too.

These are the people that see what the early adopters have done, willingly grab the best of it, learn from the mistakes of others, and do great stuff with their students.

These people are the first to take on the technology, the early adopters would usually document and enthusiastically share what they have tried, warts and all.”

If you know who actually first published this metaphor, let us know!