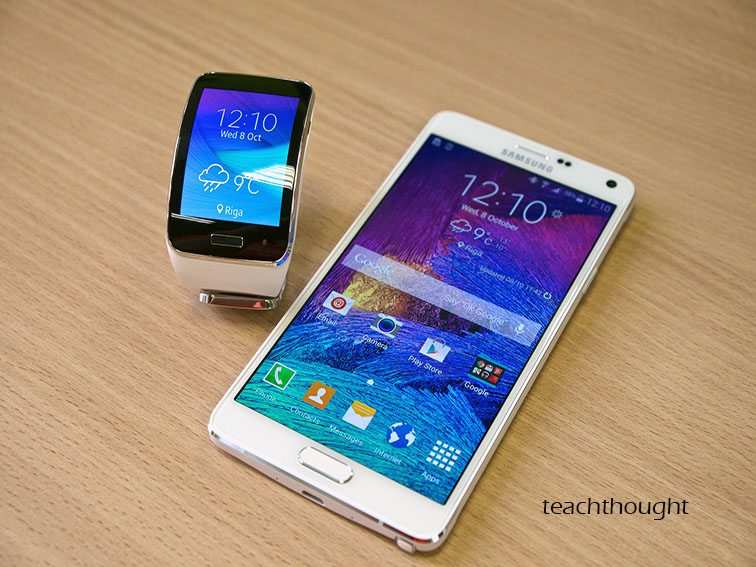 by Dawn Casey-Rowe, Smartphone Owner And User Of Analog Clocks

Analog clocks, cursive, Roman numerals, map reading. Memorizing times tables, dates, and battles. These skills were part of my K-12 curricula. They may soon go the way of quills and inkwells in favor of apps, gadgets, GPS. Maybe they should. It’s a debate many are having. Just what do students need?

“We don’t need that anymore,” they complain when I teach something “old-school.”

With one click of the phone, kids solve complex problems, Google their research, collaborate with others, and share out their results to the world. The way they learn is changing. The way I teach should be, too.

“What time is it, Miss?” a student asked.

“Time to get a watch.” It’s my standard response. Sometimes I say, “Time to do your work,” “Time to change the world,” or “Time for coffee.” There’s a big, big clock on the wall. No one is incapable of turning around to look.

The truth comes out.

“I don’t know how to tell time on those clocks.” Nothing in education shocks me anymore.

“How do you know what time to leave?” I asked.

“My phone.” Until recently, schools were in the business of confiscating phones–the one tool connecting students to all the world’s learning.  Students got detention as a reward for higher-level learning.

Thankfully, phones are allowed in my school and many others now. Long before they were, I saw a group of students crowded around one in class. “What are you doing?”

“Looking up census data.” Another time I caught a student on Skype–an education felony. “My cousin’s helping me fix this infographic.” One day, I saw a phone propped up on a desk. A group FaceTimed in a missing member. He was at the airport. His plane had been delayed and he wanted to be in class.  Maybe these kids were on to something.

I want students to have the ability to connect each other and experts in real-time and learn. I’m teaching students to build networks with top people in their field–many of whom are one tweet away. Eventually they will convert this knowledge into careers. This is important. Students may have up to seven careers in their generation–many of which they will have to build themselves.

The phone in students’ pockets is a tool they need for connecting and building. It is more powerful than my first three computers combined. With it, they can conquer the world. I no longer have the problem of “She has our group’s work and she’s absent” because “she” can be texted and “they” were supposed to share out their files on Google drive anyway.

Their phones can solve the problem of information, distance, and time. With it, they can create networks and empires more powerful and far-reaching than the Roman empire. And even though most of us pay a few hundred dollars for a smartphone that brings us status, the truth is, in most countries, you can get a decent one for fifty to seventy-five bucks.

Today, many parts of the world and certain demographics are skipping right to mobile phones. Desktops and laptops are for old people, teachers, and dinosaurs and first-world nations where we have the luxury of switching back and forth. Students are born into a world that heads right to the phone. They look at platforms without an iPhone app with suspicion.

Heck, I’m starting to, too. A gradebook without integration or a mobile app? An education platform that can’t be used on a smartphone? Inconceivable! Nearly a crime! I recently took a call with a rep from an incredible company–one whose product I would have used daily until I discovered they didn’t have mobile capabilities.

The response was shocking. “Can’t you just get a laptop cart or go to a computer lab?”

“No. My students have phones. Thank you very much for your time.”

Successful companies do not design products for the audience they think exists–they create things that solve problems for the one that really does. My students are attached to their phones. It’s their intellectual and social life support system. If that’s where they are, it’s where I must be, too.

The availability of mobile phones is changing the world. It’s not only in schools that students turn first to their phones–many parts of the world are skipping right to mobile. People are developing local economies, creating microbusinesses, forging connections, and bringing opportunities that never before existed–all on their phones.

This episode of venture capitalist Andreessen Horowitz’ a16z podcast shows the impact of mobile technology on Myanmar, a nation formerly cut off technology entirely. It’s a story that is easy to apply to education. The education landscape often seems less the center of national innovation and more like the developing world both in terms of policy and infrastructure.

The difference is that developing nations are get technology for the first time and begin innovating and using it. Our students have always had technology, we’ve just taken it away.

If the White House ConnectEd initiative is successful, every school will be connected to high speed internet. This has the potential to produce real learning.  We’ll get rid of the “tech graveyard,” because students will use their phones and devices, stocked with apps that help them learn best instead of standing around broken and antiquated machines in schools stocked with things nobody wanted to use to begin with for which someone paid.

We will be improving efficiency one-hundred fold by increasing responsibility, teaching digital citizenship that will carry over into a solid professional career, and getting rid of things nobody needs. So, I ask the question “What do students–and teachers need? How do we deliver?”

Do kids need cursive? Do they need Roman numerals? Calculus? Map reading skills? I have to admit I’m partial to such things, even being a tech lover. But still, we need to have the conversation–which facts should be memorized and which Googled then applied? Everything’s changing. We need to be ready for that change, and in most cases, lead and direct it for the benefit of our students.

I remember the phone-store kid who talked me into my first touch-screen phone.

So I ask my students, “How do you want to learn?” They want their phone. Their phones are their pencil, their calculator, their database, their notebook.

The phone is the secret weapon kids will use to rule the world, in lieu of its design limitations or cracked screen. Anyone at the cutting edge of education or technology knows this. It’s not the end all or be all, but it’s a start toward allowing kids to access the technology they need and will use in on a day-to-day basis in their lives.

And in most parts of the world, the cost is under a hundred bucks.

“If that’s where they are, it’s where I must be, too.”; image attribution flickr user Kārlis Dambrāns