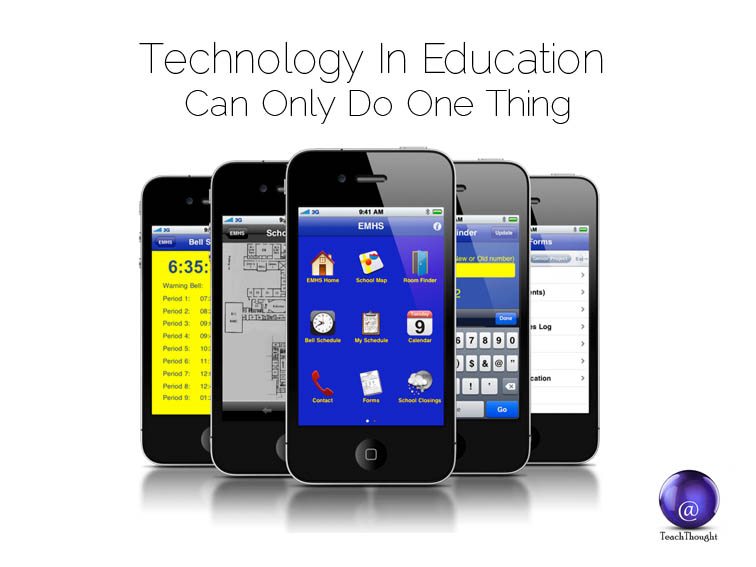 Technology In Education Can Only Do One Thing

In an extraordinary development, technology has made access to information, people, and networks recreational.

It used to be that recreation was inward, but now it goes the other way. And in this new direction, personal (phone calls, texting, email) and social (i.e., social media) interaction has exponentially increased the visibility of things.

In fact, it has subsequently modified our own behavior in that accessing other people isn’t just a distraction, but our cultural modus operandi. So we pose for the camera, document events for the sole purpose of sharing, and check messages, statuses, comments, and other interaction debris the same way we used to read magazines and newspapers.

What others are doing and thinking can come to substitute our own authentic need to do and to think, which is, in the short-term anyway, relaxing. A kind of observation-as-recreation.

But just as we teach so that students may understand, technology is successful in education only insofar as it accomplishes this. Connecting and curating and accessing information streams are morally and intellectually neutral. As teachers, it is our job to teach thought, and meaning-making, self-knowledge through complex and useful ideas.

As soon as we find that technology effortlessly makes visible and connects but must have meaning-making and self-knowledge and ideas shoe-horned in, it might make sense to stop and recalibrate things.

Technology is such an incredible force that Luddite cries of caution are a waste of time. Technology isn’t going anywhere, but instead builds on itself endlessly with or without our consent. Rather, this is a simple reminder that the future of learning is the future of what it means to be human.

To let affection motivate our behavior.

To separate what’s worth reading and watching and understanding from those things designed to distract us.

To look for solutions that have plagued us for millenia, and that technology—well-used—has the potential to address.

To generate original ideas from constantly changing and often disparate sources of information.

To know in any given circumstance what must be done, and how to begin doing it with the information, people, networks and other tools—human tools—available to us.

Technology in education, then, is useful only insofar as it extends our own humanity.

Image attribution wikimediacommons; Technology In Education Can Only Do One Thing